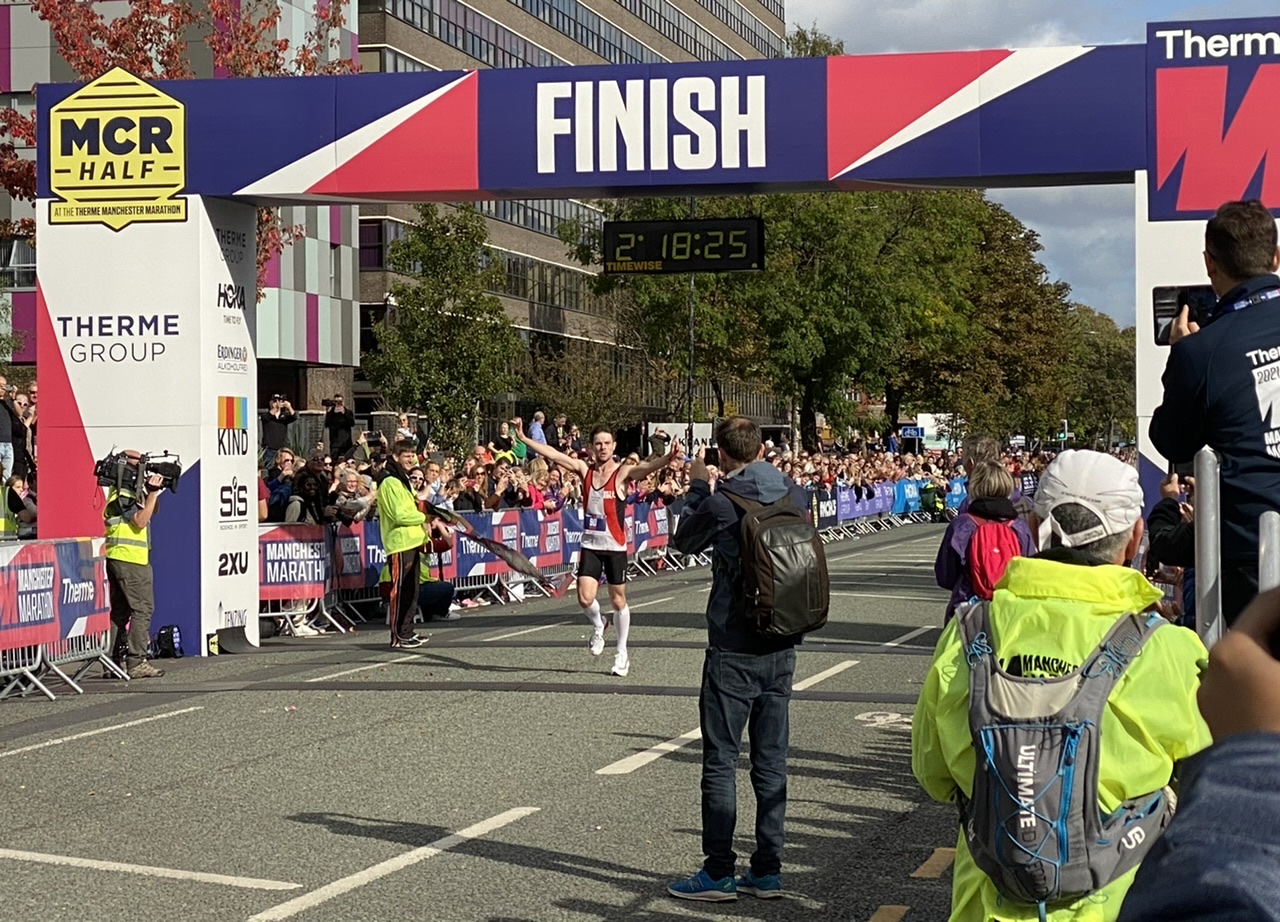 A stampede of runners descends on Sutton Park for the Road Relays, Manchester Marathon maintains its speedy reputation, a lesson in how not to pace in Chicago and the trails and fells are on fire with brilliant running. It’s that weird ‘anything goes season’ that we love.

The National Road Relays presented their usual showcase of English road running talent this weekend as Sutton Park in Birmingham played host to scores of runners fighting for the top spot on each leg and overall.

Fastest of all legs were:

Fastest of all legs were:

Full results can be found here and here.

A lesson in how not to pace a marathon?

For the second time in history two World Marathon Majors are being run on the same weekend, with Chicago Marathon earlier today and Boston tomorrow.

In the windy city Ruth Chepngetcih ran a massive positive split after going off at a blistering pace (1:07:34 vs 1:14:57) but still held on for the win beating a strong US field of Emma Bates and Sara Hall. Meanwhile Shalan Flanagan ran 2:46:39 before jumping on a plane to Boston to continue her mission to run all the majors in Sub three in a few months.

Closer to home, the Manchester Marathon has a reputation for being a fast course and this year it favoured those new to the distance. In only his second marathon, Matthew Crehan of St. Helens Sutton A.C. pulled off a huge five minute PB winning in 2:18:26 and the only runner to run sub 2:20. Both runners up were debutants over the distance,  James Donald ran 2:20:36 to take second place and Dave Barrat took the final podium position in 2:22:22 Runners gather at the start of Manchester Marathon

The Manchester Half Marathon took place on the same day and it was a local(ish) win for Mollie Williams of Stockport Harriers in a phenomenal debut of 75:46. Breege Connolly (V40) tried hard to catch her but finished in 76:30 and Claire Clancy was a little further back in 78:35.

Navesey back to winning ways

Down south at the  Brighton Half Marathon Paul Navesey made it a hat trick of half-marathon wins for this year, breaking the tape in 68:10. Marcus England took silver in 68:55 and James Turner bronze in 69:29. Bobby Searle ran a six minute PB to win in 82:22 for Brighton Phoenix, holding off Dani Tarleton (83:02) and Emily Proto (84:32)

The Run Bournemouth  event saw a host of course records, Dom Willmore of Poole AC took victory in a time of 67:30, setting yet a new course record. He was followed by Scott Cousins of Springfield Striders (1:07:41) and Rob McTaggart of Bournemouth AC (1:11:49) who took second and third.

The first female to cross the line was Kate Drew of Taunton AC, she finished in a time of 36 minutes and 11 seconds, also setting a new course record. Dawn Hunt (39:33) and Kate Cadbury (39:56) took second and third place respectively. Round up of the rest

Fraser Macdonald Oulds won the gorgeous Coniston 14 in 79:57 for Chorlton Runners. First round the lake for the women was Catherine Williamson of Loftus Whitby AC in 1:32:21.

Andrew Butler was first over the line at the Shrewsbury Half Marathon  in 77:02 and Jan Cook first lady in 87:29

Overseas at the Groningen 4 Mijl which is actually 6.437km, Izzy Fry and Tom Mortimer kicked off their winter season nicely with a third in the ladies race in 20:50 and fifth for Tom 18:15.

Luke Grenfell-Shaw, 27, claimed his victory at this year’s Eden Project Marathon, as runners from far and wide traversed the trails and pounded the pavements under bright autumn sunshine.

Luke, who finished with a time of 2.45.27, was diagnosed with cancer three years ago and is in the midst of a Bristol to Beijing tandem bike expedition to raise money for five charities that support young people living with cancer.

Pippa Ebel, 25, was the fastest woman in the Eden Marathon. Pippa, an unaffiliated runner from London, finished with a time of 3.25.08.

The fastest man in the half-marathon was Marc Smerdon, 30, from Bodmin, who finished with a time of 1.20.41 and added to his extensive Eden medal cabinet with his first victory in the 13.1-mile race. The fastest woman in the half-marathon was Ruby Orchard, 39, from Truro who runs with PB Running Club and finished with a time of 1.26.58, just four seconds short of the course record.

Ruby said: “It was quite a nice run, quite undulating, I quite enjoyed it. A bit of a change really because I’m used to roads. It was very good, well organised and there was good support on the course. It feels great to win, I’m really pleased with my time.”

More than 1,250 participants signed up to take part in this year’s races, which have been highly anticipated following the postponement of last year’s event due to the global pandemic.

A big weekend for the trails and fells

The Bennachie 50K is a relatively new race on the Ultra calendar. It takes in 6 of the peaks which make up the Bennachie Hills and has 5000ft of elevation. In its third running, it was won by Allan Christie in 4:13:35 and Jana Vidis in 5:19:10

Rory Harris left his competitors for dust, finishing the Round Rotherham 50 more than seventeen minutes ahead of his nearest rival, in 6:48:29. Susan Keens was fifth overall and first female in 08:31:05.

The Langdale Horshoes Fell Race (12.5 miles/4600ft) saw Keswick AC take a 1-2 in the men’s race as Matthew Atkinson finished in 2:15:16 and Culum Tinnon right behind in 2:16:12. Ian Holmes of Bingley Harriers was third in 2:21:35. The race website leaves competitors in no doubt what they are in for, saying, “this race is over a rough, tough course with almost exclusively rocky and slippy ground’. However Tessa Strain of Hunters Bog Trotters was not deterred and took home the ladies’ victory in 2:54:57

Raoul Metcalf presumably knows every inch of Epping Forest after he completed the “ultra at the end of the Central line” Camino Ultra Epping Forest 50K in 3:32:11 to beat Spaniard Jose Rodriguez by two and a half minutes. Shelley Claire took her win in 4:36:24

From Caldbeck to Cartmel the Lakes in a Day 80k sounds like a lovely way to see the area, albeit one with 4000ft of elevation and some cutoff times. The big names were out in force and Nicky Spinks did not disappoint, racing home first in 11:07:42. However, she didn’t manage to beat the course record of 10 hrs 45, held by Katie Kaars Sijpesteijn from 2018.

The Three Peaks Fell Race (37.4k / 1608ft) is one of the oldest fell races around and after the predictable one year off, it was back for its 67th running.

Garry Greenhow of Ambleside AC came home first in 3:05:22, exactly one minute ahead of Jonathan Fox. Ricky Lightfoot was third in 3:07:17 (and presumably was happy that is CR at the Lakes in a Day still stands!).

Best of the rest
Mastering Recovery