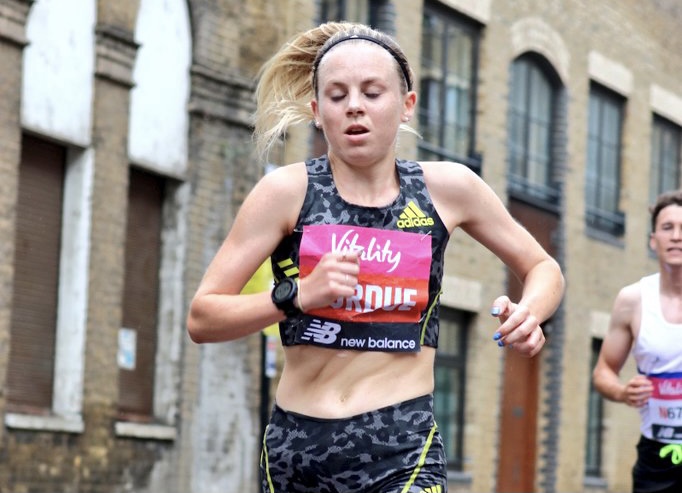 A course record for Purdue and a win for Smith at the Big Half. Olympic rematches and the Pre Classic and the Manchester International offers a host of PBs.

It was a real joy to see a big running event on the streets of the capital again and with plenty of spectators cheering the athletes on. The Big Half is always a great teaser for London Marathon and that was definitely the case in the women’s race this year.

After being passed over for Olympic selection and with debates rumbling in the background about injury issues, Charlotte Purdue was obviously to show her form despite being in training for the marathon in October.

Sam Harrison led through the early stages but was joined by Purdue who looked controlled as she applied the accelerator to stretch away. Despite having a clear lead she kept picking up the pace and raced home to a 69:51, breaking her own course record in the process.

Sam Harrison, who is also in the middle of marathon training, ran a bold effort and was rewarded with 70:24 for second place. Natasha Cockram completed the podium in 72:46.

Hannah Irwin, who had raced in the Manchester International earlier in the week, made her debut over the distance in a brilliant 73:24 for fourth. Naomi Mitchell was fifth in 74:24 and Verity Ockenden was sixth in 74:35. The men’s race had a small pack who stuck together until mile 9 when Jake Smith made a decisive move. Despite instantly putting clear road between himself and his competitors, Smith kept looking back and checking his watch – clearly not counting anything until he was over the line in 62:06.

The race commentators had some good banter about his nervousness, but it wasn’t as crazy as it might have seemed, as Jack Rowe ran a brilliant last few miles crossing the line just five seconds behind in 62:11. Mo Aadan was third in 62:28. For those after some lactic fun on the track the Prefontaine Classic in Oregon offered a stellar lineup with some Olympic re-matches and chance to see some who didn’t make it to Tokyo.

The big headline of the night was that Sifan Hassan was targeting the 5000m world record but the Olympic triple and multiple timezones seemed to have taken their toll and although she won the race she fell off WR pace by half way, finishing outside her personal best in 14:27.89.

Laura Muir was back in action over 1500m but might be a touch disappointed with her 4:05.92 for twelfth place. It was a fast one though, with Kenya’s Faith Kipyegon winning in a meeting record of 3:53.23 followed home by Linden Hall of Australia in 3:59.73 and USAs Josette Norris in 4:00.01

Back in the UK, the BMC Festival of miles took place at Wormwood Scrubs earlier in the week and saw Sam Stevens of Leicester run achingly close to the magic four, winning in 4:00.10 to beat Kyle Langford in 4:05.13 and Jeremy Dempsy in 4:06.72.

James Thie has had a good weekend of it both racing and only did his team Thie athletes Jake Smith and Hannah Irwin run great performances at the Big Half, but he set a new Welsh Masters mile record of 4:23.91 in his race at the ‘scrubs. Exciting action at the Manchester International

The Manchester International competition was a chance for England to take on Wales, Northern Ireland, a National Athletics League (NAL) squad and a GB junior team. In an event that saw oodles of new bests and new records, England retained the title once the points were totted up over the 50-odd events.

In the individual competitions, Wales took the win in the women’s 5000m after Beth Kidger ran 16:09.91 to beat Hannah Irwin who ran 16:11.27 in her debut for Northern Ireland. Irwin took the race out hard from the start in a gutsy performance but Kidger managed to capitalise and take it in the latter stages. Third place went to England’s Emily Thompson. In the men’s race NI took the victory – Neil Johnston ran 14:05.05 beating GB Junior Ossian Perrin (14:10.07) and NAL’s Omar Ahmed (14:11.59).

England’s William Battershill ran a brilliant 3000m steeplechase which earned himself a Commonwealth Games qualifying slot after front running the whole way and finishing in 8:32.91. Women’s 1500m at the Manchester International

On the roads, Kirsty Longley put herself 3rd on the V45 all time list at the Ellesmere Port RC 5k, winning it in 17 minutes flat. Joanna Marsden was a little way behind in nonetheless rapi 17:39 and Sara Avery was third home in 18:12. Michael Young’s 15:30 nabbed him first male, but there was dead heat for second with Matthew Barnes and Scott Nixon both crossing the line in 15:38

There was a special university edition of the Podium 5k which sawm Georgia Mair take top honours for Leeds City AC in 16:14 to clock a big PB, beating Lauren McNeil of Hallamshire Harriers in 16:18 and Elle Twentyman of Lancaster Uni in 16:29.

Loughborough Students AC were held off by unattached runner Adam Fodd who broke the tape in a fine 13:45, but the L’boro team still took both runner up spots thanks to a 13:50 from Tom Mortimer and 14:21 from Daniel Racle.

The performance of the day came from Caitriona Jennings who won the women’s race in 7:43:01 finishing 8th overall. Joanna Murphy also produced a fantastic run to run 7:50:58 with a week known name in the GB ultra running scene Samantha Amend finishing 3rd in 8:03:46.

Despite a freak accident and gastritis within the last month Fast10’s Karla Borland ran an amazing race in her first race in a senior international vest fro Northern Ireland to finished 4th sand pick up a silver medal in the Irish 100k Champs.

It’s been a busy old week so apologies for all those that we’ve missed out – it’s not that we don’t applaud your running, we’ve just run out of road to cover them!