Brits shine in the States as Reunion 5km closes the distance 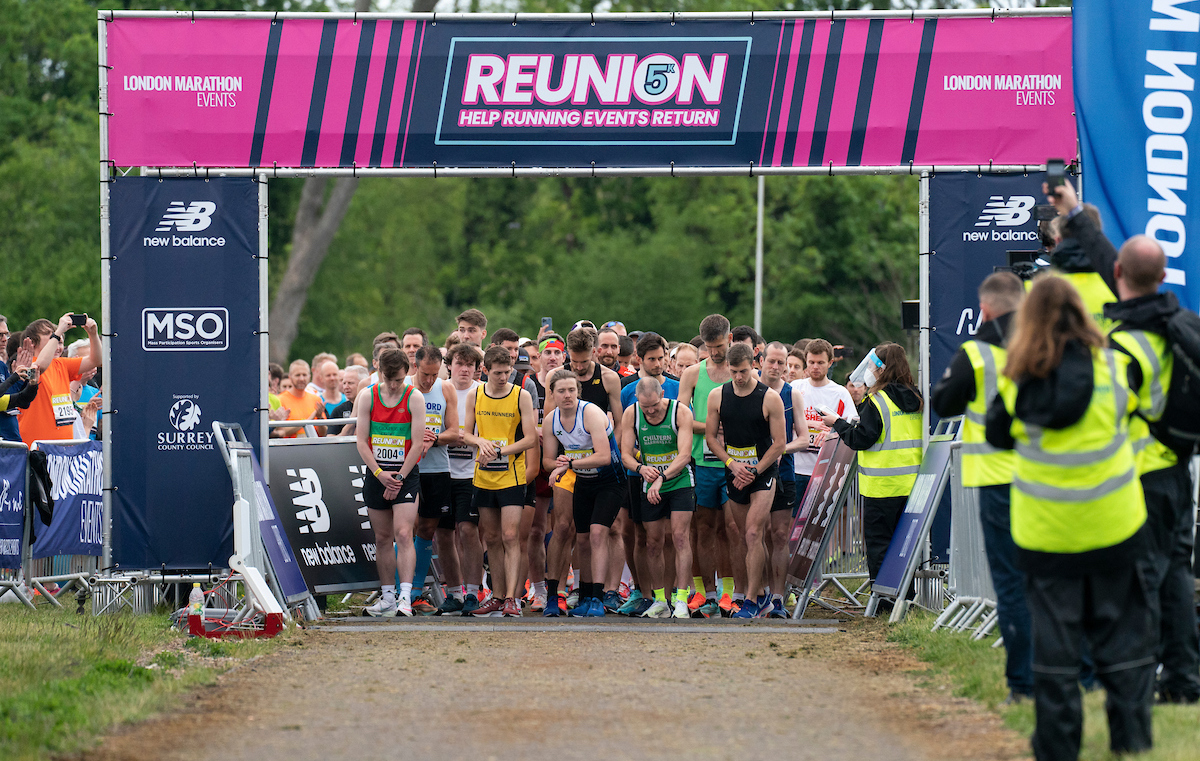 Another week and another set of impressive results to bring you both at home and abroad. Take a deep breath and get ready to immerse yourself in the highlights of the past seven days from the track and road. James Rhodes brings you all the action.

Born to Run (in the USA)

It’s not often that I start my write ups with news from the United States, or by merging two Bruce Springsteen songs together, but the Sound Running Track Meet held in the early hours of Friday and Saturday nights (UK time) provided plenty of talking points and outstanding performances. The event was billed a bit of an innovator for track and field, with a Pay Per View subscription to watch both days of action with all profits going to the competing athletes. Good news for the 28 Brits in action.

Action kicked off on Friday with 10,000m and some incredible debuts over the distance by European Indoor Champion over 3,000m Amy-Eloise Markovc and Jess Judd, who finished in fifth and sixth with 31:25.91 and 31:25.98 respectively. Both now sit in the top 10 on the UK all-time list. Agonisingly, however, both were less than a second shy of an Olympic qualifier.

That is not to take anything away from two superb debuts; that is the first time Amy-Eloise has competitively raced the distance in any form, and whilst Jess has run seven times on the road, it is over 50 seconds faster than her 32:16 road best set at the Trafford 10k last March. More impressive, perhaps, is that it comes only five days after Jess improved her 5000m PB by over 10 seconds to go inside the Olympic qualifying time. A fitting tune up for the European 10,000m Cup and Olympic Trials in three weeks in Birmingham, where both Amy-Eloise and Jess are due to race.

The good performances continued on Saturday over 800m, 1500m and 5000m. In her second competition since taking bronze at the European Indoor Championships, the 5000m provided an incredible race for Verity Ockenden as she took over half a minute off her PB to run 15:03.51. Not only that, it is well inside the Olympics qualifying standard (15:10.00) and moves her from 51st to 13th on the UK all-time list. Verity is also expected to run at the European 10,000m Cup / Olympic Trials in what will undoubtedly be a fascinating race.

There were also good performances for the men over twelve and a half laps, as Andrew Butchart ran 13:20.39 for second in his first outdoor track race since the 2019 World Championships, whilst Josh Kerr improved his PB by five seconds with 13:23.78 for fifth.

The 1500m races also did not disappoint, the highlight of which was a victory and big PB for Herne Hill Harriers’ Katie Snowden, who took over three seconds off her lifetime best – set only six days ago at the USATF Golden Games – with 4:02.98, an Olympic qualifier. It was a combination of the time, the nature of her victory (an impressive 62.4 second last 400m) and the athletes she beat; these included Olympic finalist Kate Grace, 2015 World Championship 800m bronze medallist Melissa Bishop-Nriagu, steeplechase 2017 World Champion and Olympic bronze medallist Emma Coburn and four-time NCAA Champion Jessica Hull. Also in the field were Jemma Reekie (4:05.09 for eighth) and European Indoor medallist Holly Archer (4:11.98 for thirteenth). Jake Heyward made an impressive return to racing with 3:36.24 for second behind Olympic Champion Matthew Centrowitz, improving his 2018 PB. A good season opener for the Cardiff athlete after a tough time with injury. Behind him Marc Scott, perhaps now best known for his longer distance exploits, overtook four guys on the last lap to run 3:36.28 for third, his second fastest 1500m and an undoubted confidence booster ahead of three weeks’ time. George Mills recorded his fastest opener with 3:40.11 for ninth.

Finally, good performances continued over two laps with Laura Muir (1:58.71) and Adelle Tracey (1:59.84) both running under two minutes for first and third respectively, both just shy of the times they ran at the Golden Games last Sunday. Ellie Baker continued her impressive form with 2:01.82 in the ‘B’ race, a race in which Hannah Segrave ran 2:02.72.
Kyle Langford (1:47.00), Guy Learmonth (1:47.90) and Charlie Grice (1:49.26) rounded out the British distance athletes in action.

Closer to home, the week saw a flurry of track action. Wednesday saw the second of the University of Birmingham’s Track and Field Series, which also hosted BMC Gold Standard races over 800m and 1500m. Having seen some standout performances at the first event of the year last month, expectations were high and the athletes did not disappoint.

The 800m provided a ‘home’ win for Mari Smith as the Birmingham-based athlete crossed the line in 2:06.01, an improvement on her run at the Trafford Grand Prix last weekend. Paced by reigning European U20 Champion Issy Boffey, fresh from her 1500m PB in Trafford and about an hour after running a 400m PB, Mari finished over three seconds ahead of U20 Indienne King (2:09.15, PB) and U17 Kiera Brady-Jones (2:09.18). Half of the eight-man field set PBs in the men’s race over two laps, with the fastest time recorded by reigning European U20 Champion Oliver Dustin in his first race of the year. The Border athlete was a shade outside his PB with 1:47.08, his second fastest time over the distance. It was an impressive victory for the U23 athlete in only his second 800m since August 2019. It was a close battle for second and third, with Thomas Randolph (1:48.00) and Rocco Zamman-Browne (1:48.07) both rewarded with new PBs.

The metric mile proved to be a fast race with the first seven across the line setting new lifetime bests and 11 of 16 in the field setting PBs. The top four were separated by less than a second, but it was Mark Pearce who took victory with 3:44.43. It was Mark’s second PB of the week, having done so over 5000m in Trafford. Not a bad week’s work, and a nice bonus for his coach Luke Gunn, the evening’s Event Director.

The women’s race over 1500m saw Maisie Grice better her best over the distance for the second time in five days. Having run a four second PB last weekend, Maisie improved by a further second with 4:23.18. The U23 athlete built a commanding lead from the early laps and crossed the line over five seconds ahead of the field. It was another Birmingham University athlete Yasmin Austridge who finished second (4:28.25) also in a PB. Portsmouth’s Ellie Farrow took third (4:28.67), with half of the field setting lifetime bests.

Yes, that is another Springsteen reference, as road racing continues at pace. Notably this weekend saw the Reunion 5k in Kempton Park, part of the government’s Events Research Programme and seen as a step towards the potential return of mass-participation sporting events. Two races were held, one with social distancing measures in place (runners setting off in pairs every three seconds) and the second a mass start as in days prior to COVID, with no social distancing. rules in place at all. Ollie Garrod and Georgina Parker recorded the fastest times across the two races, crossing the line in 15:28 and 18:53 respectively.

In the home of this year’s Olympic Marathon trials there were good times run at the Richmond Runfest-organised AIR:RUN 10k on Saturday and Kew Gardens 10k on Sunday. Saturday’s races saw a comfortable win for Samantha Amend in 37:24, ahead of Lizzie Keep (37:42) and Hannah Novakovic (37:46). A good performance for the Belgrave Harrier just three weeks after setting a British Record for 100 miles on the track. The men’s race saw Oliver Bridge (33:13), Pierre Meslet (33:36) and Stuart Farmer (33:44) take the top three spots.

There was an impressive time for Paulos Surafel in Sunday’s race, finishing almost three and a half minutes ahead of the field with 29:57 – particularly impressive given the many tight turns on the course. Lawnmaster Ramisier (33:22) and Cameron Dockerill (33:41) took second and third respectively. The honours for fastest woman went to Jo Vickers thanks to her 38:05, over a minute ahead of England Marathon runner Danielle Nimmock (39:15) who had a fine run at 4.5 months pregnant. Louise Mills was third with 39:34.

Sunday saw the ‘Acclaim Limited’ Open 20 Mile Road Run take place on the Isle of Man and, whilst we are awaiting for official results, Ollie Lockley ran an impressive 1:42:47 to take the win. That equates to 5:08 miles. RunThrough’s races continue to roll in, with five events happening over the past week. Sunday’s Birmingham Running Festival hosted races over the 5km, 10km and half marathon distances. It was Ian Allen (33:15) and Emily Grimwade (41:15) who took victories over 10km, with the honours going to Hermione Green (19:58) and Matthew Missen (17:37) over the shorter distance. Victoria Williams and Jonathan Tindall took wins over the half in 1:26:44 and 1:16:39 respectively.

Saturday racing around Battersea Park saw victories for Andrius Jaksevicius (31:41) and Julia Bijl (35:33) over the four lap 10km and Hannah Pullen (17:12) and Nat Rowland (15:57) over the shorter distance. Johannes Arens and Alice Heather-Hayes recorded the fastest times at the Colchester Zoo Stampede 10k with 33:25 and 38:30 respectively.

Finally, Sunday also saw the Worcester Full and Half Marathon take place, organised by Tempo Events. The marathons were won by Tomasz Pokorniecki in 2:56:32 and Gemma Mallett in 3:15:24, whilst the half distance saw fastest times run by Hannah Welling (1:30:26) and Ben Kruze (1:12:54).

The European Race Walking Team Championships took place on Sunday in Podebrady in the Czech Republic, with four Brits in action. Tom Bosworth finished 15th in the 20km walk with 1:22:27, whilst Cameron Corbishley crossed the line in 18th less than 30 seconds later, setting a new PB of 1:22:50.

In the women’s race at the same distance there was a PB for Heather Lewis (1:34:13) to finish seventeenth, whilst Bethan Davies finished 31st with a time of 1:37:09.

Back to the Track

BMC Regional races were held on Wednesday as part of the Thames Valley Harriers’ Open Meeting, with the standout performance coming from Revee Walcott-Nolan, who improved her 800m PB by over half a second with 2:01.06. A hugely impressive time, but still only good enough for seventh on the UK list for 2021, such is the depth over two laps.

Whilst it does not involve any British athletes, it would be remiss to mention the winner of the elite-only Milan Marathon – Kenya’s Titus Ekiru, who ran a hugely impressive 2:02:57. That is the fastest marathon since Kenenisa Bekele and Birhanu Lesesse at the 2019 Berlin Marathon, and equal fifth fastest of all time. Between 2014 and 2018, that precise time was the World Record (until Eliud Kipchoge rewrote history with 2:01:39). The top six all ran under 2:05.

Ethiopia’s Hiwot Gebrekidan took victory in the women’s race with 2:19:35, a four-minute PB, and a three minute margin over second placed Racheal Jemutai Mutgaa. Both race winners broke the Italian all-comers’ records, with the fastest 26.2 mile performances on Italian soil.