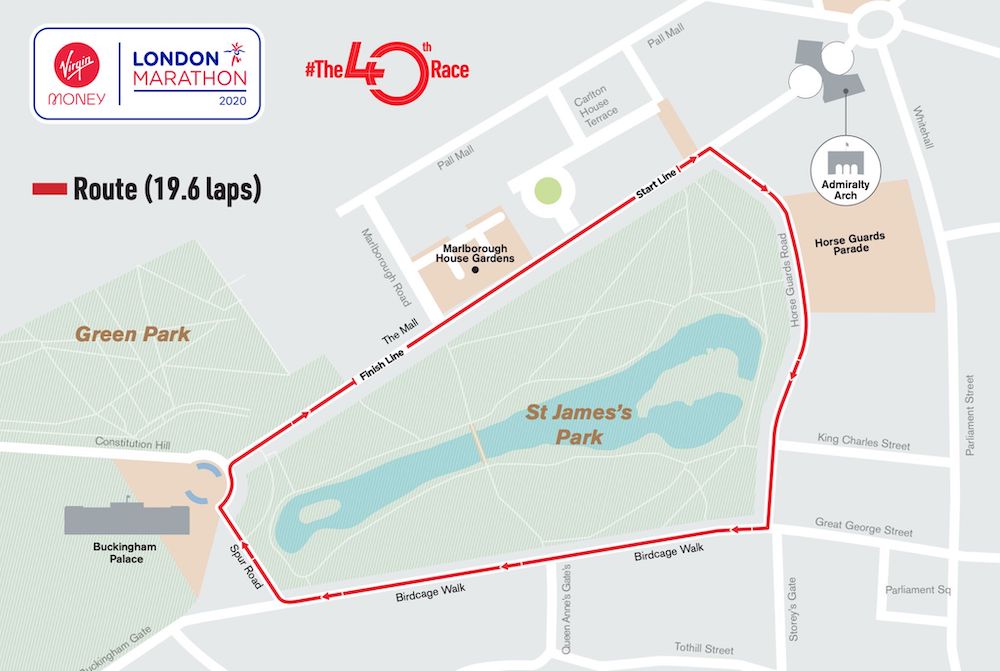 Fortunately, the Virgin Money London Marathon 2020 has not been cancelled. It does, however, have a much different flavour this year. The field is reduced to predominantly world-class athletes and will take place in a closed biosecure loop circuit around St James’s Park.

The course will be completely different, no spectators, no British Championship athletes, and no mass participants. However, I can still see two things in common with previous years:

1. The finish line is in the same place
2. An outstanding elite field
All the rest, we can reasonably say it is going to be radically different.

The field is reduced to only 75 athletes (45 men and 30 ladies) among the top in the world; no other athletes will get to the start line. Also, all the athletes will be covid-tested before travelling to London and on arrival in the athlete-only hotel where they will spend the days before the race.

The hotel that has been chosen offers 40 acres (16 hectares) of grounds in which athletes can perform their pre-race shakeout activities without leaving the biosecure bubble. Athletes will bussed to the start on the morning of the race, which means a very early start for some!

With a closed-loop circuit around St James’s Park this year, there won’t be any start in Blackheath, no fly by at the Cutty Sark, no cross of the river at Tower Bridge and nobody will pass a scaffolded Big Ben. The course will be 19.6 laps with the finish line in its traditional location in the Mall.

Given the circumstances of a restricted race, the necessity of keeping athletes isolated, and avoiding big gatherings while maintaining the ambition for London to become a world-record location, St. James’s Park loop undoubtedly is one of the best options.

A few days ago, I went to revisit this year’s London marathon course, even though I already know St. James’s Park, not only for its position as a tourist hotspot but also because it used to be part of my evening jogging commute. Potential for a fast race

Accordingly to the organisation, one lap is exactly 2.15 km, so competitors on race day have to complete 19.62 times the distance of a single lap.

St. James’s Park loop owns all the ingredients to be a super-fast course:

Nobody knows what kind of performance Kipchoge, Bekele and Co. are going to deliver, but regardless of its legality, there is some potential for a World Record.

Personally, I’m very intrigued to see what is going to happen both for the nature of the course, which is extremely fast in my opinion, but also in how the circumstances may have affected the athletes’ training and minds. For sure, even Kipchoge, Bekele and co. had their training hit by some race uncertainty. The first half of 2020 with a forced break from races has played well for some but badly for others, and I wouldn’t even exclude some outsiders from coming out. A new start line for the London Marathon

Impact of no crowd

Also, another factor is the lack of spectators; the marathon will take place in a bubble, and the public won’t have access to watch the race.

We know this one has been a key difference between Breaking2 in Monza where, for most of the course, there were no spectators. While in the Ineos 1:59 challenge in which Kipchoge managed to cross the finish line within 2 hours, he could rely on plenty of supporting spectators who surely gave him some marginal mental strength.

Well, let’s start from the finish, so there are no surprises here (if you already know the course). After analysing the official course map for 2020 and photos of previous years, the finish is clearly in Stable Yard, with the third timing mat aligned with the lamp post on the left.

So I created a segment with a complete lap to start and finish at the finish line. Therefore, according to what the organisation has shared, I estimated the start line 2020 to be where the traffic lights are at the end of the Mall, next to the Artillery monument, and I created another segment to start and finish at that point.

So the gap between the start and finish in the Mall is roughly 530m as in this segment.

While the gap from the new start to finish is roughly a mile (segment here).

Let’s do some math now: Officially, one lap is 2.15km, so 19 laps cover 40.85km. Once you have passed the start line 19 times, you still have 1345 m to go. And this is exactly what the organisation has confirmed, but it leads me to two questions:

1. Where are the athletes going to run the remaining 1345m, if the distance from start to finish is 1.61km? A shortcut in the park for the last lap?
2. Wouldn’t it have been easier simply to place the start exactly 1345 m from the finish line? So, athletes would just remain on the same course all the time? In that case, a start line exactly 1345 m away from the finish line would be just past the Guard Memorial.

Regardless of how these last 1345m will be covered I’m sure it will be a great race and one big day for road racing; this time, unfortunately, we can only watch.

When I created the Strava segments, I intended to give everybody a chance to run the London Marathon 2020 course and have the chance to post a segment CR (maybe) faster than some Olympians.

Note that the segments have been recorded on the road where I expect athletes to run on race day, and where I assume the course has been measured.

However, mortals in their runs are likely to be on the footpath or on the path next to the road, which would probably still match the Strava segments. Still, the actual distance will be shorter, probably in the region of 50-20m less each lap. So for us, these segments will offer the chance to measure ourselves versus Kipchoge/Bekele and Co. The advantage is that we may run a shorter distance, but always with the hope that some of them will wear a watch on race day and post the activity on Strava. 😄

Are you Zwift enough?
Bassingham Bash sees records tumble in the wind