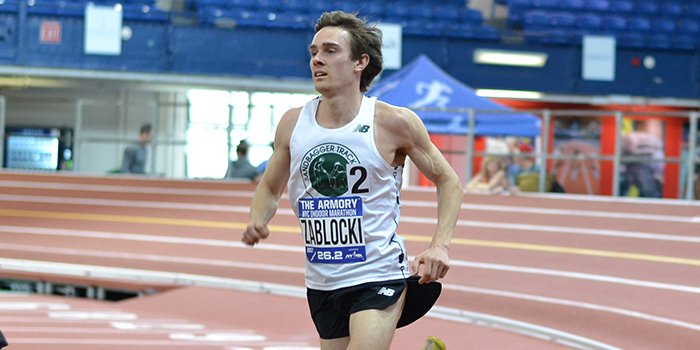 At the Armory NYC Indoor Marathon, new men’s and women’s world marathon records have been set.

The indoor marathon presented by the New York Road Runners is in it’s 2nd year and is gaining somewhat of a cult following in the running world.

In a race where mental toughness is key, runner’s must must run 211 laps around the 200m track to complete the marathon distance.

In the men’s race, USA’s Christopher Zablocki, completed the marathon in a record time of 2:21:48, breaking the existing world record by eight
seconds.

Zablocki, who finished 30th in the US Olympic Trials in 2016, has already ran five marathons this year all under 2:26:00.

Next up for the world record athlete is the Boston Marathon, on April 17.

One world-record wasn’t enough on the New York 200m track, and in the women’s race 43 year old Laura Manninen, crossed the line in 2:42:31 to set a new world record, eclipsing the previous record set by Allie Kieffer by more than two minutes.

For most of the race USA runner Kate Pallardy had been out in front, but with 40 laps to go the athlete from Finland took the lead, and held on for the win.