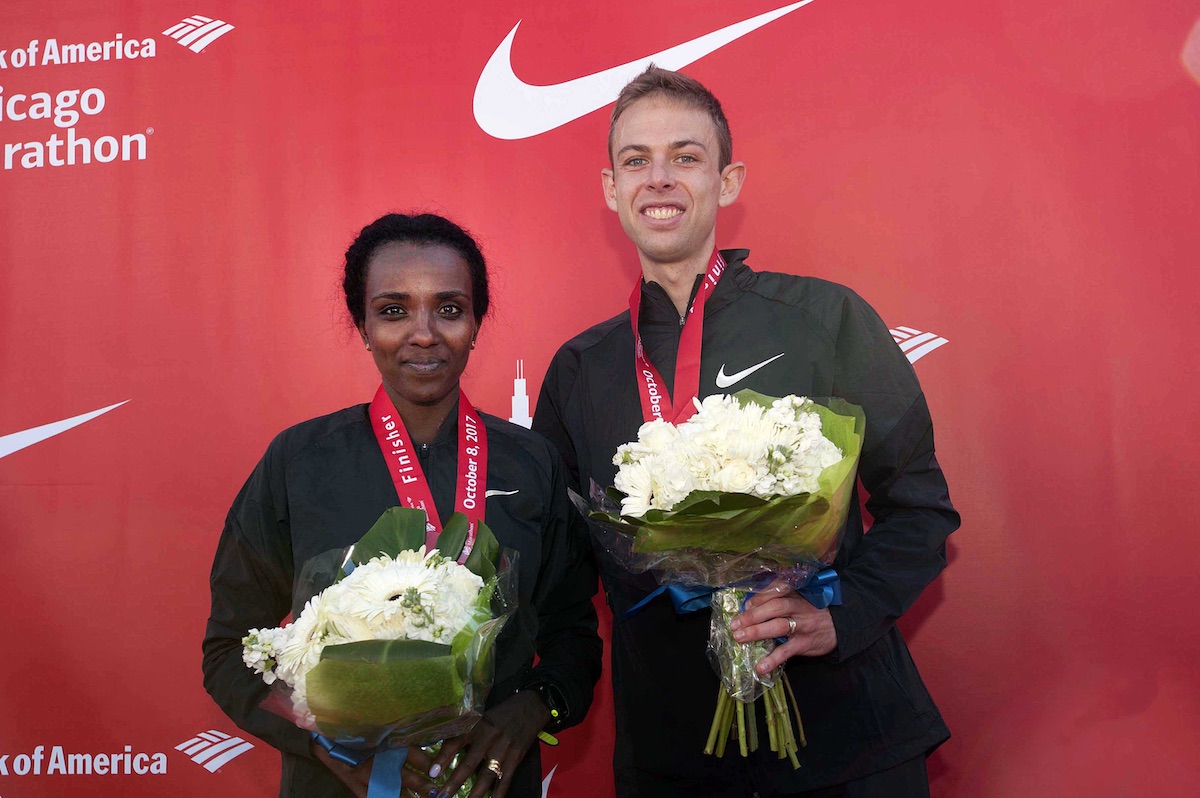 Galen Rupp and Tirunesh Dibaba powered to victory in the 40th edition of the Chicago Marathon on Sunday (October 8).

Olympic Marathon medalist Rupp was keen on a fast race to test his current limits, but after his historic win in Chicago, he won’t complain about the pedestrian pace that sees him become the first American to win in Chicago since Khalid Khannouchi in 2002, and the first by an American-born runner since 1982.

After a slow start USA’s Aaron Braun lead the large group of 27 male runners through the 10km split in a measured 31:24. At the halfway point the lead group came in 1:06:06 and as the race progressed the numbers began to diminish including world record holder Dennis Kimetto and Emmanuel Bett stepping off the course.

Rupp was always in the middle of the pack and the slow early pace played right into the double Olympic medalist’s strengths, namely the track speed he would have at his disposal in the closing stages of the race.

At the 37km mark, the lead group was down to three; Rupp, Abel Kirui and Sisay Lemma, but it wasn’t long before the American decided to go and pulled away from his two challengers who had no answer.

Over the final 5km, it was the 31-year-old’s race to lose with the gap increasing with every kilometre.

As he came down the home straight Rupp looked strong and composed to clinch the win in 2:09:20, taking 38 seconds off his personal best.

“It’s incredible. You train so hard year in, year out, day in, day out, and to have a race like this where it all comes together and to win in a city that’s such a special place for me, words can’t describe it. I’ve been second so many times in my career so I’m thrilled to be able to pull it out,” said an overjoyed Rupp.

When Rupp spoke to Fast Running before the race he said: “My preparation for Chicago has been great. This time my workouts in training have been phenomenal and this is by far the best shape I have ever been in for a marathon.”

You can read the full pre-race interview here including details on his training, goals and his thoughts on Mo Farah in the marathon.

Tirunesh Dibaba lived up to the favourites tag and stormed to the win in the women’s race, clocking 2:18:30. It was not the personal best the Ethiopian star told Fast Running she was aiming for, but without pacemakers, it was still a commanding performance from the three-time track Olympic gold medalist.

After a fast start and 32:28 10k split the women’s field came through halfway in 1:08:48, with Dibaba leading American Jordan Hasay and the Kenyan trio of defending champion Florence Kiplagat, Brigid Kosgei and Valentine Kipketer.

It wasn’t long before it was a two-way race between Dibaba and Kosgei, and with little over 10km to go, 32-year-old Dibaba broke away with her challenger unable to answer. Dibaba finished almost two minutes ahead of  Kosgei in second with 2:20:22.

While, American star Hasay finished an impressive third in 2:20:57, moving her to number two on the American all-time list in only her second marathon.

US star Tatyana McFadden won her eighth title in the women’s wheelchair race in 1:39:14. Fellow American Amanda McGrory finished second with Swiss athlete Manuela Schär in third. In her marathon debut, Britain’s Sammi Kinghorn finished fifth posting 1:43:52 well below her own sub 2-hour marathon target and over 20 minutes under the qualifying standard for the 2018 Commonwealth Games.