Too many miles on the clock? 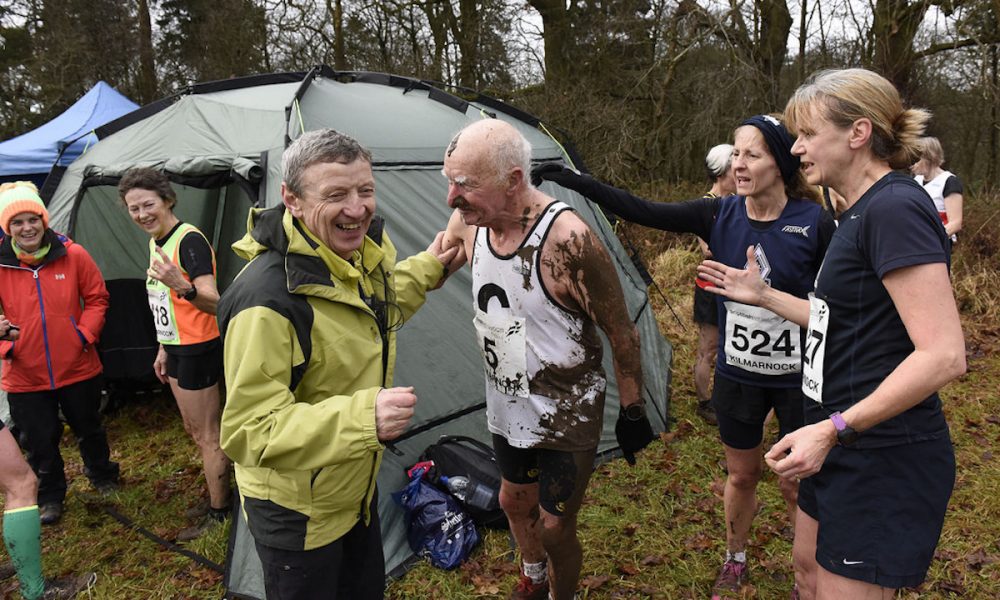 I would be at risk of the accusation of teaching you to suck eggs by simply telling you that as an older runner you will be at greater risk of certain running-related injuries than you would have been if you were involved in the sport a decade, two or even three or four ago.

Unless you’ve been extremely fortunate, you are probably no stranger to the odd bout of plantar fasciitis, an Achilles tendinopathy and/ or some kind of meniscal injury between the shinbone or thigh bone.

Digging into the science

But let’s dig a little deeper into what recent sports science research into kinematics and fundamental movement patterns can teach us.

The sports science literature has consistently demonstrated that that biological aging influences running biomechanics. More specifically kinematic analyses of masters athletes compared to those of junior and senior status has revealed that on average as a masters runner you are likely to have a shorter stride length and increased cadence.

One of the causes of this will be a reduction in the ability of your ankle to produce force and thus propulsion. Kinematic analyses of masters runners in a recent journal article, published in Human Movement Science, Harrison et al. (2019) conducted laboratory studies of different aged athletes and assed their inter- joint coordination between hip, knee and ankle. Guess what? There’s good news and there’s bad news!

The good news for you is that they found that coordination patterns were similar between groups for the majority of running stance phase which indicates that most of us masters runners are largely able to preserve running ability into our 60s and beyond.

Having given you the good news, alternatively the study found that masters runners appear to display different coordination patterns during the mid-stance phase, compared to senior athletes. More specifically the masters runners in the sample displayed different coordination patterns among the hip, knee and ankle during periods of mid-stance. This may be indicative of what Harrison et al. (2019) reference as, “protective biomechanical adaptations”. The biomechanics of the mid stance phase

According to the study, the mid stance phase is worthy of attention in biomechanical terms because this is the phase where runners experience the greatest amount of loading on the body. At the mid stance phase of the running cycle, if we follow the ‘correct’ technical template, our centre of mass should be over the stance foot.

Forward lean should be minimalised because if it’s pronounced, this could be indicative of a tendency to over-stride. The pelvis should not drop too much to one side and thus minimising contralateral pelvic drop and likewise there should be minimal hip adduction in order that the knee does not cross the midline of the body.

The problem is that as masters runners we are more likely to deviate from this technical template compared to when we were juniors or seniors due not only to our biological but also our training ages. If we were cars, we’d be told we had the proverbial ‘too many miles on the clock!’. In technical terms, masters runners were observed by Harrison et al. (2019) to be moving in an in-phase ‘propulsion’ pattern, while young runners tended to maintain an in-phase ‘collapse’ pattern.

This finding suggests that masters runners transitioned from ‘collapse’ to ‘propulsion’ earlier than the young at the ankle as their body’s way of protecting itself from potential injury. Elsewhere in the kinetic chain, greater and prolonged hip adduction, where the femur moves back to the midline, was found to be a compensatory mechanism habituated by many masters athletes in order to absorb the force during loading.

This affects the ability of masters runners to effectively transition from the ‘loading’ to ‘propulsion’ phase of the running stance and is thus one of the reasons we tend to be slower as masters athletes than we
were a few years ago.

So the research findings of Harrison et al. (2019) are a double edged sword in the sense that our bodies intuitively develop a practical sense of adaptation in order to help us keep running despite the ravages of middle and old age but by doing so our running efficiency and thus ultimately our speed is compromised.

More specifically, the lack of the ability of the ankle to produce force, as reported above and resultant shorter period of pronation are functional in preventing injury but there is a price to be paid with slower times on the stopwatch.

If we have identified specific biomechanical differences between how we run these days compared to when we were younger, in terms of hip adduction and dorsi and plantar flexion of the ankle, it would be easy to simply focus on strengthening exercises for these two areas of the body.

Indeed ‘Clamshells’, ‘Wide Leg Squats’, ‘Low Lunges’ and ‘Fire Hydrants’ could all be used as part of your S&C programme to build adductor strength. Likewise ‘calf raises’, ‘lateral hops’, ‘ankling’ and ‘A-skips’ can all be used to facilitate ankle strength.

This being said what is occurring at both the hip and ankle are effects rather than causes of our biomechanical decline so don’t fall into the classic teleological trap of mistaking an effect for a cause. The moral of the story is therefore that we have to work on trying to maintain functional movement patterns for the whole of the kinetic chain rather than simply focusing on the effects of our perceived weak points in the body.

So this is why as masters runners simply plodding mile after mile may keep our cardiovascular systems healthy but we risk simply reinforcing incorrect motor patterns as we pound the pavements. This is why we need to once again return systematically to the base of the pyramid of the long term athlete development model and work constantly and diligently at the ABC’s of Foundational and Fundamental development. In many ways we need to rediscover our childhoods when we twisted and turned playing football in the street or when we hopped and jumped on the netball court of the school playground. The answer lies in a renewed focus on agility, balance and co-ordination which can be developed through cross training and looking beyond the silos of our own event group as endurance athletes.

Spend an extra 5 minutes before your next session on drills even if it means cutting back on the mileage recorded on Strava. After the session don’t just statically stretch to restore range of motion but later on try and get a hot bath and the stretch once again when you are recovered from your session and when your muscles are warm. This time effect the same stretches as you did straight after your session but this time hold them for around 30s so that you are now stretching to increase range of motion.

Lessons from the best

Several years ago I had the pleasure of coaching a group of talented athletes at Birmingham University alongside our star guest for the day- Jenny Meadows.In her mid 30s at the time, the former world championship 800m bronze medallist was herself at the point where she would have been eligible for masters competition.

I will never forget saying goodbye to her as she prepared to make the long journey home from Birmingham to Wigan after a day at the track. She still had a 5 mile run to do that evening plus a stand alone stretching session. She told me she would ditch the run in favour of an extensive stretching session because this was more important given her biological and training age in the sport.

Don’t be fooled for this was no act of laziness by the way- she was pacing a Diamond league event later that month and was in great shape. How many of us would do that? Be honest. Have you ever, like
me, dashed back to the office after a lunch time run having crammed the miles in only to ignore your stretching whilst bolting a sandwich down your neck? It’s a question of priority and Jenny’s view was that given the choice of dropping a session due to time constraints, flexibility was more functional compared to the steady run which had already been habituated through years and years of aerobic development. The above being said, athletes I have worked with often make the mistake of thinking that technical development is restricted to the warm up and cool down phases of training sessions. Some endurance based athletes fall into the trap of thinking that the main fitness component of the session is all about an exclusive focus on training the energy systems. Of course it is but it can be more than that. As someone whose coaching has been inspired by the philosophy of the late, great Arthur Lydiard, let me give you an example from the repertoire of the New Zealand legend.

Hill work is traditionally used by runners to facilitate strength endurance and when done in repetition format it has considerable demands on the lactate energy system. This being said when undertaking modes of hill springing and hill bounding, as advocated by Lydiard, one can ease the demands on the lactate system whilst focusing on the kind of lower limb strength which will help aid running efficiency.

Lydiard teaches us that by running more slowly up hills we can make biomechanical improvements which ultimately make us run faster!

1. When was the last time I went for running gait analysis and what did the results tell me?

2. When was the last time someone videoed me so I can self-reflect on my running style?

3. The next time I am socialising at my club, why don’t I and my friends talk not about how many miles we have run on Strava this week but on what we did in our last drills session?

4. What am I doing to think outside of the box and learn from sprinters, jumpers and throwers in terms of how their work could aid my agility, balance and co-ordination?

5. How am I making sure I maximise the space provided in my warm up and cool downs to work on running efficiency, be it through dynamic drills or static stretching?

The full reference for the research which underpinned this article can be accessed at: Harrison, K. et al. (2019) Inter-joint coordination patterns differ between younger and older runners. Human Movement Science. Volume 64, April 2019, Pages 164-170

Matt Long has tutored on courses dedicated to Fundamental Movement Patterns as a coach educator for England Athletics for a decade. He coaches at Birmingham University AC, Birchfield Harriers and South Derbyshire Road Runners and is a Midlands Team manager for masters. He is the author of more than 260 coaching articles and represented England Athletics as their Endurance expert at the recent International Youth Conference. He can be contacted at mattlongcoach@gmail.com to discuss this article further.