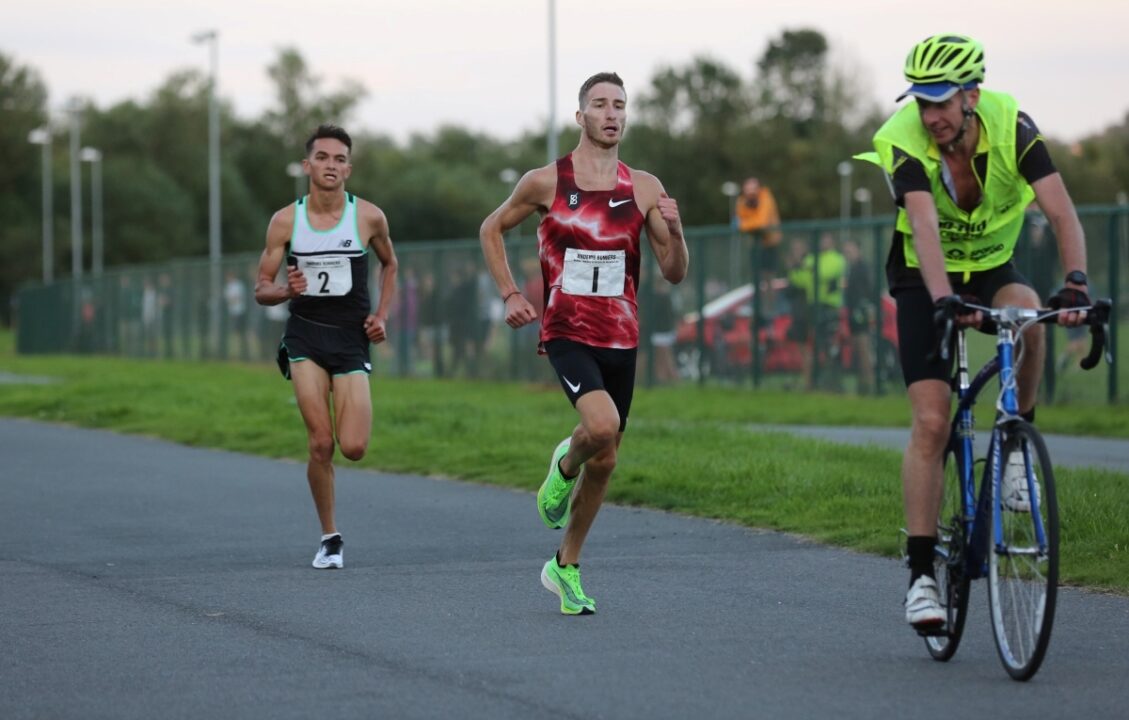 The weekend roundup is brought to you by SOAR Running who we are proud to have partnered with to being you all the news from the British club racing scene. And what a way to kick off as some of the nation’s best took to the roads and delivered some stunning performances

Renowned for its low-key setting and flat course conducive for fast times, the Podium 5k saw some of Britain’s best male and female runners test themselves post-lockdown.

The event was the first race back for most of the competitors, which made it all the more exciting to see how everyone would perform. The race’s simple mission is to provide a great opportunity for fast running, no fuss, no frills just high quality racing from a high quality field.

With the British Champs around the corner, many were using this event as an opportunity to assess their current fitness. Despite the possibility of some rusty performances due to this being many athletes’ first race, this didn’t happen!

Marc Scott, who spent the entirety of lockdown in Oregon training with the Bowerman Track Club and clocked a huge 1500m personal best just a few weeks ago, had an absolutely storming run.

The athlete went into the race with the British record (13:27) in his sights, and quickly made this reality. Scott went out hard from the gun and crossed the line in an incredible time of 13:20, a massive improvement on the previous record held by Nick Goolab, which he broke back in February this year.

Scott led through the first kilometre in around 2:39 before Omar Ahmed took the lead through 2k in 5:22, followed by Scott and Alex Yee. Once again, at the 3km mark, Marc Scott came both front, passing through in around 8:03 with Yee and Ahmed on his tail.

It was at the fourth kilometre that Scott began to consolidate his lead and went through in 10:43, a couple of seconds behind Yee who was behind him. Scott crossed the line at 5k in 13:20, a British record and just 2 seconds outside of the European record held by France’s Jimmy Gressier. Alex Yee crossed the line in second place in an impressive time of 13:26, also within the previous British record time. This time is not only a massive 5k road PB for Yee, but he also knocked 3 seconds off his best time for the 5,000m on the track.

Phil Seseman was in third place with yet another PB on the night. The Leeds City athlete knocked four seconds off his time and clocked 13:39 for the distance. It was ultra-runner, Tom Evans who was fourth in an incredible 13:41, which is his first ever race over the 5k distance on the road. His 5,000m was set back in 2017 where he clocked 15:01.

In fifth place was Omar Ahmed in 13:42 and Dewi Griffiths was sixth in 13:43. Ben Dijkstra, Jonathan Brownlee, Grant Sheldon, Frank Baddick, Chris Perry and Nathan Jones all dipped underneath the 14-minute barrier!!!

The women’s race was also packed with quality and saw many athletes go out hard, with the leading pack clocking a sub 3-minute first kilometre. For many, this appeared to make for a painful race, but it didn’t take away from some fast times being clocked.

By 2km the group had broken up and Beth Potter had pushed ahead, passing through in 6:02, just a few seconds ahead of Adidas athlete, Jess Judd. Potter then continued to lead through the 3k (in 9:09) and 4k mark (in 12:17) with a 10 second gap ahead of Judd.

Beth Potter extended her lead to 12 seconds and was first across the line, taking the course record away from previous holder, Laura Weightman in an impressive 15:24. This time also place Potter 5th on the UK road 5k all-time list. Finishing second was Blackburn Harriers’ Jess Judd in a strong time of 15:36. It has also been a while since Judd too ran a 5k on the road. Until last night, Judd’s best remained at 18:44, which she set back in 2008. She does however hold an impressive track 5,000m time of 15:16. Judd went out hard with Potter, but it was clear from early on that Potter had that extra edge.

The third-place finisher was Verity Ockenden of Swansea AC in an impressive 15:37, just 3 seconds off her track best. Her previous 5k time of 16:02 from last year, shows just how much consistent hard work can pay off as she has knocked 25 seconds off in one year.

A standout performance was given by Leeds City’s Bronwen Owen who came in fourth. Owen made her intentions clear from the start and went out at a quick pace, stopping the clock at 15:45, 34 seconds faster than her 5,000m track best from last year.

After an absolutely storming cross country season, where she finished 1st U23 at the European trials and secured her spot on the GB team in Lisbon, Owen had the base for a solid year. She knew what she was capable of and went out to prove it.

Cambridge & Coleridge’s Holly Archer also had a sensational run, pulling away from the group she had settled in with and chasing down those in front. She crossed the line with a time of 15:52, her first official sub-16 5k time. Archer took a solid 12 seconds off her previous best from last year.

Lizzie Bird and Eleanor Bolton both also crossed the line in sub-16 times of 15:53 and 15:56 respectively.

There were four other races on the night with some stunning times throughout. Check out the full results at this link.

Also on the road this weekend, was the Preston 5 and 10 mile. This event is renowned for attracting some speedy athletes, particularly in the 5-mile race.

In slightly different fashion to previous years, the race was run as a time trial event, with athletes setting off at different times one at a time. This meant it was inevitable that times would be slightly slower, especially given that the wind decided to make an appearance, but there were still some impressive performances.

The overall win in the 5-mile was secured by Southport Waterloo AC’s Ben Johnson. Johnson had a clear lead and crossed the line in a strong 24:40, just 18 seconds off his previous best which I clocked last year.

Following behind in second place was Joe Monk of Preston Harriers. Monk took a solid 9 seconds off his personal best by running 25:00 flat. Monk had a strong lead ahead of third place finisher Joshua Hale (Wirral AC) who crossed the line in 26:25

The women’s event was a similar story to the men’s as Kirsty Longley (Liverpool Pembroke & Sefton H AC) took the win in 28:28 just 32 seconds ahead of second place. It was AFD’s Laura Gent who ran a solid time for her 5-mile debut of 29:00. In third place, with a time of 31:50, was Finty Royle (Chorley ATC).

Over double the distance, it was Michael Young of West Cheshire AC who came to the fore, crossing the finish line in 55:32. Blain Rooney was second in 55:46 and David Birtwistle in 57:26.

The winning woman had a stormer of a race, not only winning her event but also coming third overall! It was Emily Kearney of Wirral AC who took home gold in 56:33 in her 10-mile debut.

Behind Kearney in second place was GB marathoner, Tracy Barlow. Barlow clocked a solid time of 58:25, also in her first 10-mile race. Rachel Brown (Border Harriers) secured herself a podium position in 1:00:50.

PB for Hartigan at BMC

The BMC Stretford once again came to the rescue for the 800m runners. Athletes were still required to stay in their lanes; however, it is possible that at next week’s BMC event, this rule may be dropped. Despite athletes having to stay in lanes, there were some impressive times.

For the men, it was Tom Dodd (Birchfield Harriers) who narrowly took the win in the A race, running a solid 1:51.06 to improve on his time and position from last week’s event. In second place, in a PB time of 1:51.19, was Henry Johnson. The U20, Houghton Harriers athlete took exactly a second off his previous time from last year. The 3rd fastest time was set by the winner of the B race, Thomas Niner, in a strong 1:53.20.

In the women’s event, it was once again Georgie Hartigan (Birchfield Harriers) who set the fastest women’s time of the night. Hartigan didn’t disappoint as she not only secured the win, but also clocked a lifetime best of 2:04.35 improving on her previous PB of 2:04.60 set last week.

The second female to cross the line was Mick Judd coached athlete, Khahisa Mhlanga (Herts Phoenix) in a speedy 2:05.53. Sabrina Sinha, the winner of the women’s B race, had the third fastest time on the night. Sinha, the Cambridge Harrier athlete, ran a season best of 2:08.23.

Happy to open the season with a win and a pb tonight. Thank you to @BritishMilers for putting on a great meet under difficult circumstances 👏 https://t.co/GNVUpByZao

Reappearing once again in the race calendar, was the RunThrough Tatton Park 10k. Given the lack of 10k events that are occurring at the moment, the event saw some particularly speedy times.

In order to abide by the RunBritain guidelines, the event ensured athletes were set off in waves, based on their estimated finishing times and other rules were implemented.

A cracking performance came from Adam Peacock of Bromsgrave & Reddich who ran himself to an impressive 9 second PB of 31:53. Peacock had a strong 42 second lead ahead Karl Welborn (BRAT) who clocked 32:24, followed by Edd Flynn who is listed as third despite running the same time of 32:24. It is likely this recording of results is due to the socially distant start process as the gun times do vary quite significantly.

For the women, Carla Davies ran herself to a win in a chip time of 36:53. The Preston athlete had a strong lead ahead of second place. It was Katie Lysons who secured herself the silver medal position in 39:22 followed by Isabelle Burke in 42:30.

Runners praised the measures put in place by organisers

Athletes took to the roads to race over the longer distances at the Isle of Man Half and Full Marathon. With visitors or returnees to the island still needing to quarantine for 14 days it was no surprise Manx homegrown athletes dominated.

Christian Varley had the upper hand in today’s event and ran himself to the win with a solid time of 2:36:51. This was over 7-minutes quicker than Varley’s previous lifetime best over the 26.2 distance!! It was Orran Smith who came in at second place in 2:39:44. Third place was achieved by Mark Burman of Manx Harriers in a strong 2:43:31.

Sarah Webster of Northern AC had an astonishing run to finish fourth overall and win the women’s event. She crossed the line in 2:46:22, less than 2-minutes off of her PB. An impressive place to be for your first race back after lockdown! Vicky Carre (Guernsey) came in second in 3:20:56, a huge 3.5-minute personal best! The third female finisher in 3:37:41 was Helen Taylor of Western AC.

The half marathon event was also not short of some speedy times. Taking the win in 68:18 was Alan Corlett of Manx Harriers with a huge 8-minute lead! Corlett boasts a strong personal best of 66:33. Andrew Nash was second in 76:47 followed by Nigel Quaye in 77:25.

SOAR are part of the UK club running scene and we are delighted to suppiort the weekend roundup. To find out how we can help you match your club kit to your ambition check out this article or get in touch here.