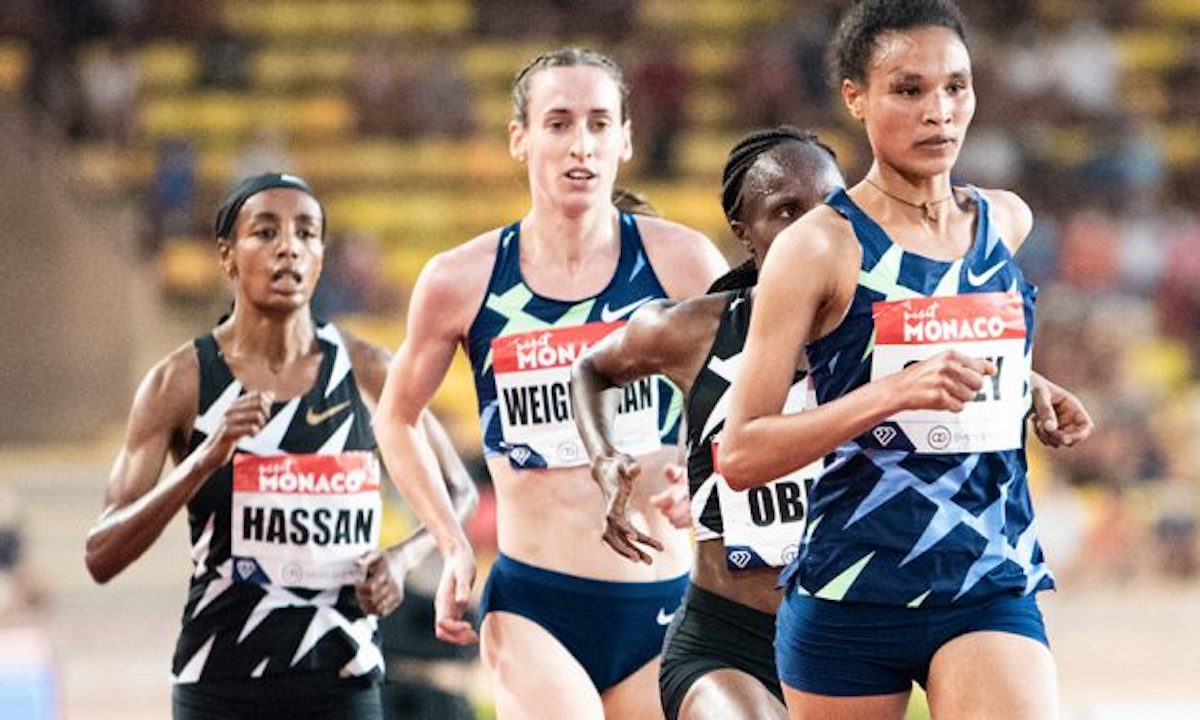 We have partnered with SOAR Running to bring you all the action from the British club racing scene.

The Diamond League was back in action in Monaco. Luckily with an exemption the athletes were able to focus on the races on the track rather than the race to get back and beat the lockdown deadline.

Joshua Cheptegei nabbed most of the headlines with his world record smashing, perfectly paced 5000m in 12:35.36 but in this round up we’ll focus on the GB and IRL results.

National records for Muir and Mageean

Over 1000m Laura Muir came second (to a super strong looking Faith Kipyegon) in 2:30.82, running a new National Record and finally beating Kelly Holmes’ mark, which she’s been after for some time.

The battle of the Scots over 1000m was the one I was particularly tuning in for and Gemma Reekie looked like she had a podium spot sewn up and indeed, ran a PB of 2:31.11 to be second fastest ever Brit, but it was only enough for fourth place.

Ireland’s Ciara Mageean had been showing form that meant she was definitely one to watch and boy did she prove it on the night. Mageen came absolutely blasting down the last 200m to take third in 2:31.06 and a new Irish record.

Second National Record in the bag in my second race of the season.

Another lady who showed her intent for the rest of this year was Laura Weightman who ran a 10 second PB over 5000m to take third in 14:35.44  – 2nd fastest British runner of all time over the distance. In a fantastic, brave run Weightman ran hard with a group including Helen Obiri, Sifan Hassan and Letesenbet Gidey.

As Hassan dropped out and Obiri and Gidey pulled away Weightman dug deep to finish six seconds off Paula Radcliffe’s British record. Eilish McColgan had a tough race, finishing seventh in 14:57.37.

Also going second on the all-time list was Jake Wightman who ran a 3:29.47 over 1500m for third place. As with Weightman, Wightman went out hard with a group including Timothy Cheruiyot and Jakob Ingebrigtsen holding on to take nearly two seconds off his PB and to finish less than a second outside Mo Farah’s British Record. Charlie Da’Vall Grice was 8th in 3:34.63.

Brits in action in Dortmund

Team NBRMCR could already have classed this as a successful weekend after Ciara Mageean’s result, but it didn’t stop there. At the Puma Jump ‘n’ Run meet Jonas Reass also smashed his 5000m PB, running 13:26.01 in Dortmund, coming second to Germany’s Mohamed Muhamed. Sol Sweeney (Perth Strathay) placed sixth in 13:54.52 and Emile Cairess was eighth in 14:07.52.

3000m Steeplechaser Phil Norman spent 2019 teetering on the edge of World Championship Qualifying standard (8:29:00). Not so this year. After a strong showing at the Armagh 5k back in Feb, his first chase outing of 2020 left us in no doubt of his form.

He obliterated his previous best with an 8:23.60 at the Paavo Nurmi Games earlier this week, which moves him to 15th on the UK all-time list and leaves him a fraction away from Olympic standard.

It’s great to be back! So happy to be racing on the track again, I opened my season last night in Turku (Finland) at the Paavo Nurmi Games. I ran a huge lifetime best of 8:23.60 only 1.6 seconds away from the Olympic standard. Very grateful to have the opportunity to race, it was a great meeting and hope to come back again next year. #tokyo2021 #steeplechase #teamnorman #paavonurmigames #continentaltourgold @quincehoneyfarm

In France, Shaftesbury Barnet’s Lizzy Bird was in action at the EACPA Open in Pontoise and making sure Phil Norman wasn’t the only Steeplechaser smashing out fast times this week.

Lizzy broke the 2000m SC British record, running 6:11.79 in her first official ever time for the event. Aimee Pratt (Sale Harriers) ran 6:18.48 for 4th which was also a huge PB and a great run that would have also broken the previous British record set by Lenny Waite in 2017.

Earlier in the week at the Bronze edition of the World Athletics’ Continental Tour in Sollentuna, Elliot Giles ran 1:45.46 over 800m to place second in his heat.

Behind him was Daniel Rowden who burst back onto the scene after a two year break, running 1:45.55 over 800m – his second fastest time ever and a photo finish with compatriot Jake Wightman.

On the home stage, Max Burgin was the one showing his intentions for the year ahead. The 18 year old broke his own U20 record for the 800m, clocking 1:44.75 at the British Milers’ Club Meeting on Trafford on Tuesday with a stunning run to break 1:45 for the first time.

At the Music City Distance Carnival in Nashville Hannah Segrave opened her post lockdown racing account with 2:02.35 and Amy-Eloise Neale was just outside her PB clocking 4:09.44 in the 1500m.

Belgrave Harriers hosted the Belgrave Endurance Night in Battersea Park on Wednesday – a series of 3000m races which saw Izzy Fry and Eoin Pierce run the fastest times of the night.

8:14.47 secured the win and a new PB for Pierce of Newham & Essex Beagle, comfortably ahead of his clubmate Josh Trigwell (8:19.25). Coach Craig Winrow will be pleased with the evening’s racing as Pierce, Trigwell and third-placer Euan Campbell (8:24.87 PB) are all under his tutelage.

Izzy Fry had to run in a mixed race for her women’s victory, but 9:22.06 and a PB makes that irrelevant. Sarah Astin of City of Norwich was second lady in 9:29.41 and Verity Ockenden did a quick turnaround from last weekend’s Podium 5k to take third in 9:33.81.

The Danny McDaid 15k was won by Eoghain McGinley of Letterkenny AC in 48:47 seconds with Springwell Running Club’s Ciara Toner the first woman in 56:42 seconds. The story of the day though went to another sensational run by Tommy Hughes setting a v60 world record with 51:30, a full three minutes off the previous record.

Letterkenny saw an age category World record set by Tommy Hughes. Tommy ran 51.30 to smash the previous O60 record of 54.32 which had been set in 2013 by Dutchman Cees Stolwijk. pic.twitter.com/ezttKGJkzJ

Off the track and roads and in the scenic Dorset countryside the Maverick Race team were back in action. James Phillips and Amanda Holloway were the winners of the long route, Brian Underwood and Jenny Marshall took the middle victories and Georgie Lambert and Daniel Eyre were top of the short-route runners.

Finally, if that doesn’t make your plantars ache, imagine running the WHOLE time that the above performances have been going on. Dan Lawson conquered Lands End to John O’Groats in 9 days 21 hours 14 minutes and 2 seconds. Wow. More to come with a full report from Robbie later this week.