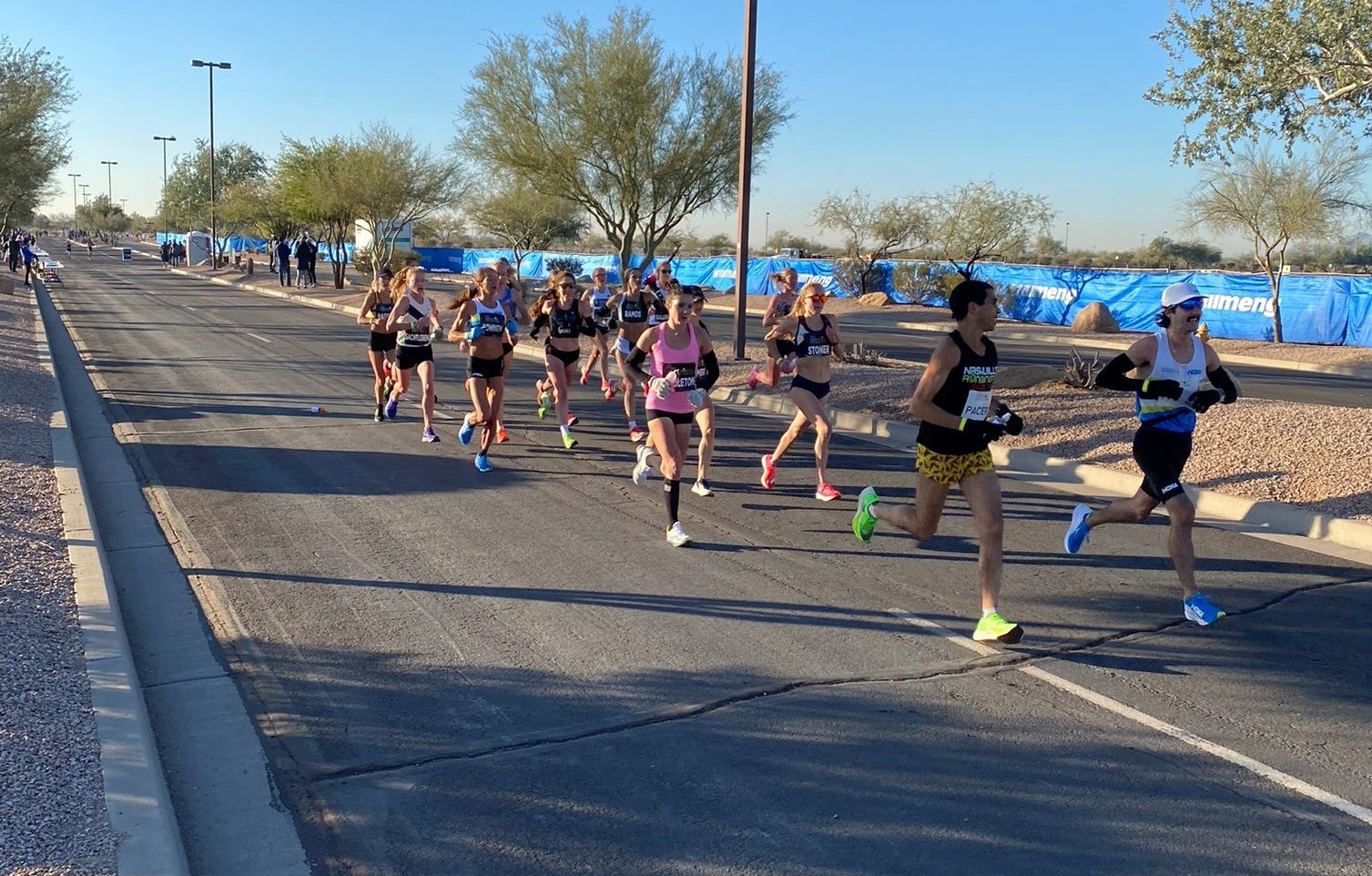 Sarah Inglis in a big group at 10km. Photo: The Marathon Project

Scotland’s Sarah Inglis runs a stunning marathon debut in Arizona and Sean Tobin wins the 10,000m at the Athletics Northern Ireland Winter Meeting in a blistering new PB as athletes continue to show that 2020 isn’t all over just yet.

Last minute cancellations left right and round the track meant that racing was in rather short shrift this week. But that doesn’t mean there wasn’t excitement to be had.

Sunday saw an early Christmas present for marathon fans as The Marathon Project injected a little bit of pro-athlete sparkle back into the tail end of the year. Organised by Ben Rosario, the coach of Hoka NAZ Elite and Josh Cox, the race saw a strictly curated list of 100 runners run 4.3 miles super flat loops around a closed course in Chandler, Arizona.

Most of the participants were from the USA but even if you’re not a marathon geek it’s worth taking a look at the wider results. The women’s winner was Sara Hall in a big PB (and a near-American Record) of 2:20:32 – she came second at the London Marathon in 2:22:01 which perhaps gives you some idea of the impact of the conditions in that race.

Seven men went under 2:10 today in Arizona as well as 12 women under 2:30. One of those women was Scottish national and Canadian resident Sarah Inglis (Lothian) who ran a superb marathon debut of 2:29:41 to place 9th female.

While it would be easy to focus on the galling fact that her time is just 11 seconds off the Olympic qualifying time, let’s take a moment instead to be in awe of her pacing. To run a 74:36 and a 75:05 (tbc) for each half shows incredible control for an athlete that has not taken on the distance before. Her half marathon PB, set in Houston in January this year is 70:24.

Her time represents the 5th fastest debut by a British woman and puts her in fine company with likes of Freya Ross, Jo Pavey, Charlotte Purdue, Louise Damen and Steph Twell clocking debut times around or inside the 2:30 mark on their debut.

Dylan Hassett who has represented Ireland since 2018 ran a creditable 2:36:53 for 25th place. She ran 2:35:29 in the Houston Marathon earlier this year but was unable to build on it this time.

The men’s race was run by Reebok sponsored US athlete Martin Hehir who is a working medical student. Also making his marathon debut was Peninsula Distance Project / Bed & Herts runner Matt Leach who ran 2:17:38 to finish 38th ( going through half in 1:07:46).

Leach also ran the Houston half earlier this year, where he set a big PB of 62:57. His pacing suggests he was looking for a sub 2:15 clocking but given his talent over HM and down, we suspect there’s more had in the future.

Ennerdale Cycle Circuit hosted the Hull 5k and a win which was a whisker under the 15 minute mark, as Matthew Nelson broke the tape in what looks to be a new PB of 14:58. In second was Joseph Moores of Salford Harriers & AC who finished in 15:05 safely ahead of Athony O’Brien (Liverpool Pembroke & Sefton Harriers AC) who clocked 15:24.

The Let it Stow Half Marathon was one of the few festively named challenges that survived the cut. Katie Austin (Ipswich Jaffa’s) was first home after 1:58:06 out on the trails. Tom Wake (Woodbridge Shufflers) was first man back in 1:29:48.

The Hullavington Secret Santa which should have been 10 miles, managed to be run but with a curtailed distance of 7.7miles due to road closures. Charlotte Taylor-Green (Clevedon AC) secured victory over the hilly course in 44:43 using it as the tempo section in the middle of a long run. Catie O’Donoghue of Bristol and West was runner up in 49:54 and her club-buddy Clare Joliffe was third in 50:57.

Men’s honours went to Alan Baker in 43:02 followed oh-so-closely by Gary O’Brien for Swindon Harriers in 43:05 with Paul Gardiner rounding out the podium with a time of 43:40.

Also hilly (one assumes) was the West Wight Chilly Hilly 10 which was conquered this year by Tom Newnham of Ryde Harriers in 63:08. The local Harriers held all three top spots as Gary Marshall crossed the line 30 seconds later and Adam Tuck took third in 63:50.

Gillain Johnson held off a strong local challengers taking the women’s win for the Ryde Harriers in 72:02 ahead of the Isle of Wight Road Runner’s Hayley Baxter in 72:52 and Wight Tri’s Janet Fletcher in 76:12.

The Blast 5k results from Sunday are still tbc (if indeed it goes ahead), but Blast at the Meadows took place on Tuesday albeit with a somewhat “boutique” lineup.

Stuart Livingstone of Corstorphine led the charge of 11 competitors, winning in 16:13 – a comfortable minute and half plus ahead of Jackson Woodruff’s new PB (17:53) and Andrew Carrick who finished in 18:43. No ladies ran in this one.

Not a race, as such, but the Birmingham Track Elite group did a 10,000m time trial this week which resulted in Michael Ward beating his previous best by 3 seconds to run 29.13. Dougie Musson ran 29:28, Tom Drabble 29:47 and Grant Anderson 30:15. Also running fest time trials was the Team Thie training group with some stand out performances including GB steeplechaser Ieuan Thomas clocking 29:02 for 10000m and Ciaran Lewis 14:24 for 5000m.

We hope to see them back again soon and thank the organisers for doing their best to host responsible racing during these uncertain times.

Mark McKinstry (North Belfast Harriers) claimed the men’s title in 12:04 in a tight run race with Craig McMeechan (North Down AC) who finished 2nd with 12:09 with Aaron McGrady (East Down AC) 3rd in 12:25.

Brilliant NDAC turnout at the Bobby Rea XC today. Congrats to @Craigychan on his 2nd place finish and @katzmo1995 on her 4th place finish. Thanks to @AthleticsNI for a really well organised race pic.twitter.com/r5hoqFc4Ad

Too many miles on the clock?
A little more 2020 racing – Irish round-up