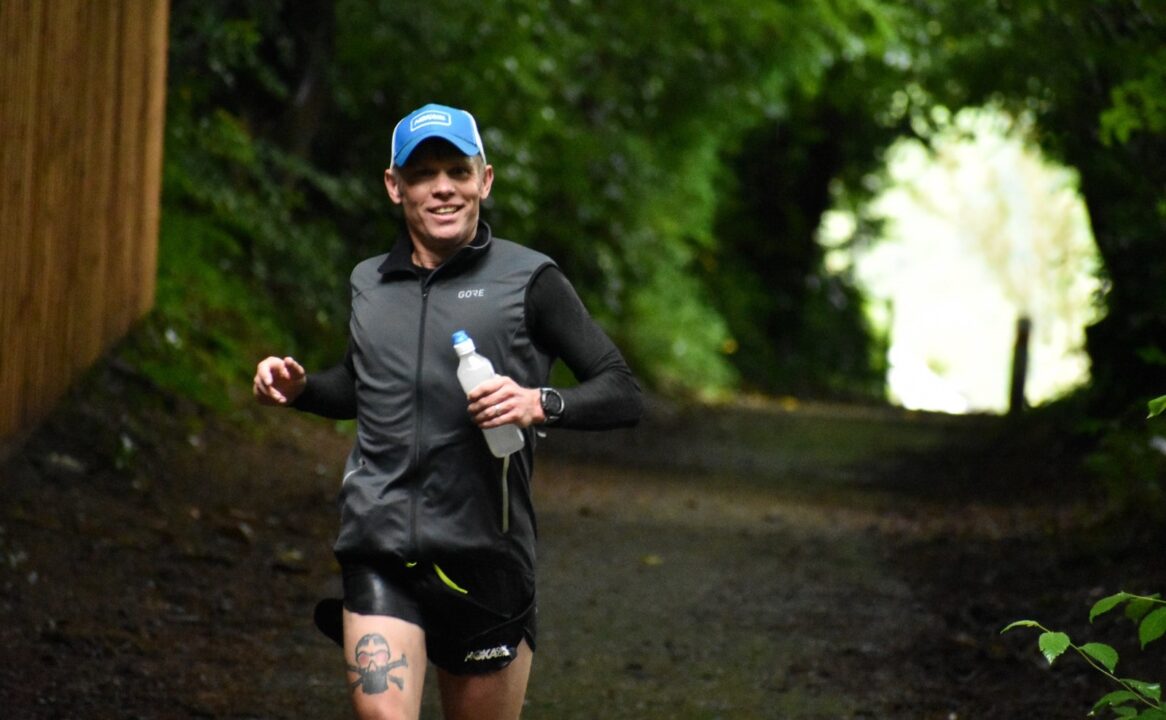 On Friday 3rd July Scotland lifted the five mile limit for leisure travel. For most, this just meant a drive into town but for one man it meant 134 miles on foot.

At 8am James Stewart (Fast 10 class of 2018 and experienced GB 24hr runner) set off on a mission to run an FKT on the John Muir Way.

To quote James: “The route looks pretty cool”. Slicing right across Scotland from Helensburgh on the west coast, through Edinburgh, and finishing at Dunbar on the east coast.

FKT’s or Fastest Known Times are a growing phenomenon and one which James believes will only increase thanks to lockdown, “you can do it when it suits you, at your behest and to satisfy no-one but yourself’.

The aim is to run a distinct and repeatable route which can be followed by others. The best efforts are logged at fastestknowtime.com.

It’s the original socially distanced race. The John Muir Way was even more appealing because “you don’t need trail shoes for most of it – it’s a very runnable route and not super technical” – ideal for a man who hates ridge running and heights!

No recce, no problem

In October last year a long held desire to try an FKT solidified, with the aim to hit the John Muir Way at the start of July. Luckily the slight lockdown lifting came just in time (though not enough for his planned post-FKT holiday).

Lockdown restrictions meant James was unable to recce much of the route, though he admits he probably wouldn’t have done so anyway.  ‘It means you can’t be worried about a particular hill or dread a certain stretch’.

That said, he has found that overall, lockdown life has made his training easier. Normally he’d be commuting down to London or around the country in his role as Head of Learning for Sky but instead he’s had more time at home. That has meant more space for S&C (3 classes a week) and a different training cycle with less of a build and taper.

A normal solid training week would be around 80 miles, lifting to 120 at peak, but in current circumstances it has been less variable.

Lockdown life has meant he is able to “have a lie in and just get up on a Friday morning for my long runs which can be anywhere from 25-40 miles”. When pressed as to what time that is he concedes that he’s often out of the door at 4am to ensure he’s ready for meetings at 9am.

“The problem was, even when it wasn’t raining the ground was wet which means your feet get wet anyway, but I’m a Scot, I’m used to it”.

James had made a pledge at the start of the year not to buy any new clothes so when we talk about kit he’s very straight forward.

“I used whatever I already had that was comfortable – several pairs of Hoka ONE ONE shoes and socks, swapped out when they got wet, plus a Gore gilet that was a leaving present from a past job”, but in general he’s “not one for brands or lots of gear”. James at the finish with his Dad. Photo: Adrian Stott

Despite the conditions at the start, shorts and t-shirt were enough for most of the route. As for fuelling, his wife’s banana bread got him a good way through the challenge along with sports drinks (SiS) and other solid food until he couldn’t stomach it any more and switched to the ultra-runner’s standard of Coca Cola and gels to get him through the final stretch.

James says that breaking the race up into the next few miles or until the next place he’d see his support team was key. While he did do some mental preparation he aims to “have a whole toolbox of tricks rather than one specific strategy, because if that stops working you’re stuck”.

It was eight miles from the end, with a truely stunning sun rise over the Scottish coast and the realisations that a sub 22hrs was in reach, that he “really began to enjoy it”. As Adrian Stott commented “they don’t call Dunbar ‘Sunny Dunny’ for nothing!”. “I worked out that I needed to run 10 minute miles which doesn’t sound like much but after that distance it is. But just like a football team who are several goals up and minutes from the end, it was then that I started to really feel it flow and be able to take it in”.

He finished in an unofficial time of 21:53:22 – smashing the previous record by over 7 hrs.

Having the support of family, supporters and other runners was an important part of the achievement including the CEO of Scottish Athletics Mark Munro, who joined James on the bike for the last eight miles.

What an athlete, now @james_stewart13 is the true definition of tough, as he smashed the #FKT for the @johnmuirway route, 130+ miles from Helensburgh-Dunbar by over 7 hours in 21 hours 53 mins! @pyllon @VP_Glasgow_AC @scotathletics pic.twitter.com/yISNAaF21L

Clearly tackling 134 miles is an incredible physical challenge but for non ultra runners it can be hard to get a sense of how impressive James’ performance was.

Part of the GB24hr management, Robbie Britton highlights that “what’s always impressive about all of James’ performances is his work ethic.

Even if the odds are against him he will always give his best, so when it comes to a good day like this, when things are generally going his way, he achieves something really special”.

“I was sick at just over 100 miles. That was really hard. Just gone midnight and all that,” remembers Stewart. “But the experience of the the 24hr races kicked in. Salt, Pringles and dark chocolate saved me.”

Stott adds “The JMT is not too technical and pretty much all runnable s played to James’ strength as a 24 hour runner. It will take a top effort to beat this but no doubt others will be tempted”. Just out for a run with a bottle of pop and the shortest shorts James could find that morning. Photo: Gerry Healy

Being able to speak so coherently about his experience just seven hours after finishing, James is clearly able to bounce back fast but he’ll be taking some time to recover.

“I’ll take a week off doing anything and tonight I’ll put my feet up and I’ve promised the kids we’ll have a Dominoes.”

The European 24hr Champs in September, where he was due to represent GB this year, has been cancelled so the next big competition is the World Champs in Romania in May 2021.

Selection is still to be confirmed but ”things like this can only help to remind selectors that you’re in good shape and can cover good distance without getting injured”.

With James’s experience, he’ll be hoping to make the 2021 World Champs team, but having said that he’s conscious that his love of running has evolved over the years. Now, racing and placings is not the only thing that drives him. Nowadays it’s “all about the story” and he’s certainly got more FKT’s on his mind.

The best part of the FKT? “The real best bit was that I must have had 30+ different people run with me at times, many of whom I didn’t know. Add to that scores more out supporting and saying hello, waving flags etc. That was so cool”.

He says that having just finished this challenge his mindset is at the point “where I think never again” but in the same breath laughs “I’m sure I’ll have a few more adventures”.