A simply sensational weekend of racing 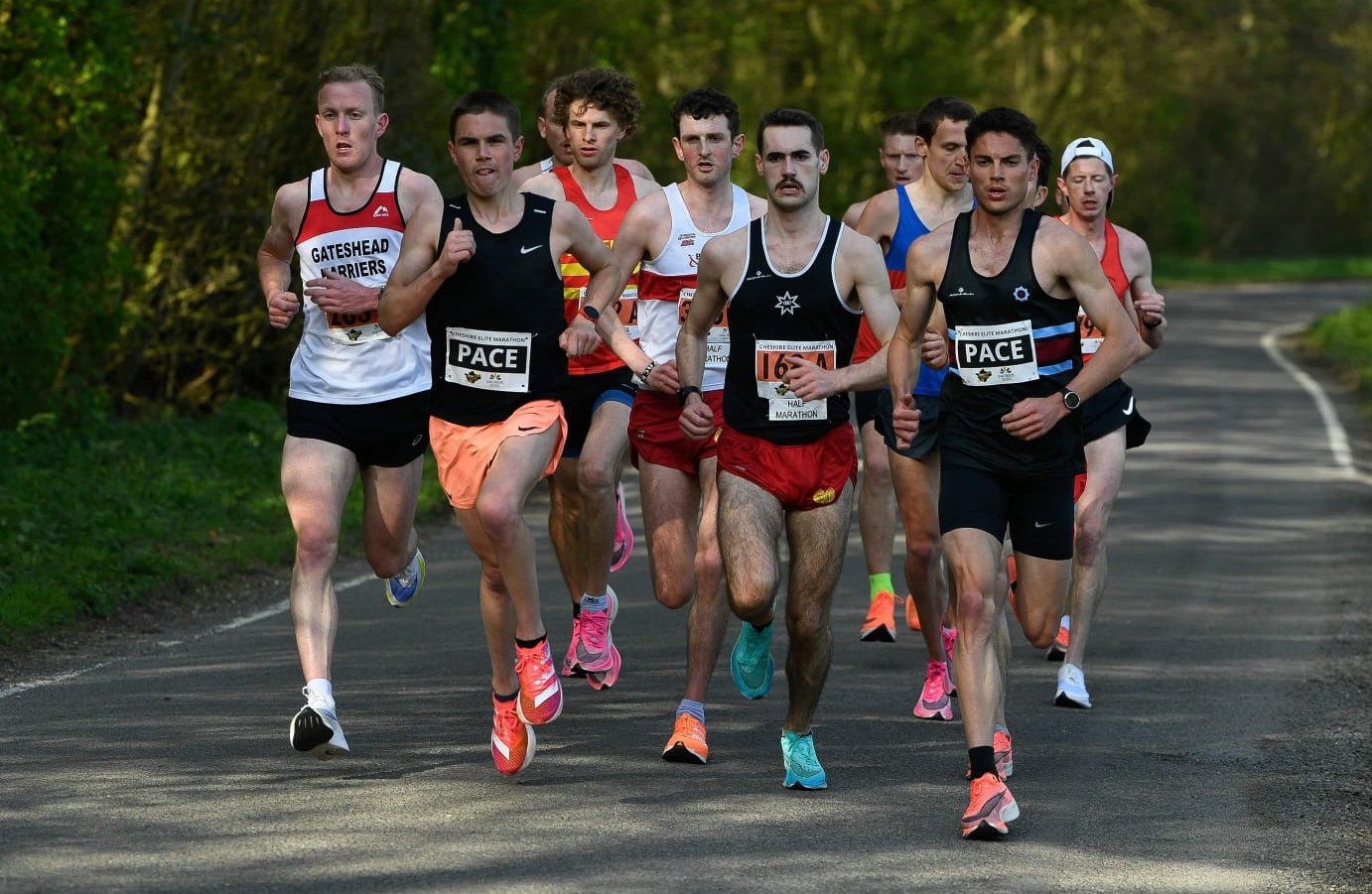 In a world of COVID, racing has been a bit like buses. You wait ages for something to happen, then it all happens at once! It’s been a bumper week of activity on the roads and track, and here’s a speedy tour through some of the highlights. Buckle up…

I think it’s fair to say that, after the Olympics marathon trials, the Cheshire (formerly Wrexham) Elite Marathon (plus Half Marathon) has been the most anticipated 26.2 miles of the year. After changed dates and venues, the gun finally went off on Sunday morning in Pulford.

Open to athletes capable of running under 2:40 (men) or 3:00 (women) or the half marathon equivalent, the event was billed as an opportunity to attempt Olympics qualifiers and just race in the likely absence of big city marathons. Plenty of athletes jumped at the opportunity, and it lived up to its billing, with perhaps a petty unexpected winner.

Jake Smith, who last year obliterated his half marathon PB to go third on the British all-time list, was due to pace to about 25km (having also paced at the Olympic marathon trials last month). This would be impressive enough, given he ran a 3:50 1500m and c.8:25 3000m on Wednesday. However, pacing the winners was not enough for Jake. And so he carried on, and on…

So much so, he didn’t just carry on, he won the marathon. In 2:11:00. His debut at the distance. That’s 30 seconds under the Tokyo standard (if the Olympic places weren’t already decided!). I really am struggling to put this into comprehendible words! An amazing performance. In the women’s race, Ireland’s Aoife Cooke booked her spot at the Olympics by taking four minutes off her PB for victory in 2:28:36, almost a minute ahead of the Tokyo mark. This performance also puts her fourth on the Ireland all-time list for the distance.

Maor Tirouri of Isreal also ran under the 2:29:30 Olympic standard with 2:29:03, with Tokyo now due to be her second Olympics after Rio. The podium was rounded out by Ann-marie McGlynn with 2:29:34, a new Northern Irish record. Fourth place was a huge PB for Rose Harvey, who clocked 2:30:58 to take 25 minutes off her previous best and go inside the Commonwealth qualifying mark. There were equally impressive performances in the half marathon, with victories for Samantha Harrison (69:48, taking over a minute off her PB) and Calum Johnson (63:45 in his HM debut). Behind Calum there were good runs for Christopher Richards (65:32) and Daniel Connolly (65:37) for second and third. It was Kirsty Longley (76:23) and Tracy Barlow (76:35) who completed the top three.

Harrison’s run represents a sensational step forward, inside the UK AT top 15 with a little under three years in the sport under her belt. Tom Craggs said of the race “Michael Harrington has done a fabulous job pulling off this race. Perfect course and set up to run fast, and a brilliantly pulled together field.

On a personal note I’d like to thank him too for his tribute to Natasha Lewis, who was due to race the half and who was killed after being hit by a car on a run two weeks ago. Seeing her clubs colours on the medal ribbon was a class act from man who fundamentally cares about the sport.”

There has been plenty of action on the track in recent days, both at home and abroad. Perhaps the most notable was the first of the University of Birmingham Track & Field Series, which also hosted the first British Milers Club’s Gold Standard races for 2021 on Wednesday. Over 270 athletes competed in events including BMC and open races over 800m, 1500m and 3000m.

The standout performance came from Jess Judd, who broke the BMC record for an all-female 3000m with 8:52.73. This was a commanding win for the Blackburn athlete ahead of Jenny Nesbitt (9:04.75) and Sarah Astin (9:11.37), who were two of seven to set PBs in the race (others including Charlotte Alexander with a Euro U20 Champs QT and Fast Running’s Hannah Irwin who took over 20 seconds off her 2019 best). The shorter distances provided plenty of excitement also, with the BMC 800ms won by Ben Greenwood (1:48.72) and Katie Kirk (2:05.17), although Mari Smith, in only her second race in the past twelve months, was faster in the open races with 2:03.77.

World & Euro U/20 standard for McLuckie

Finally, Phil Norman and Maisie Grice both entered the UK all-time top 10 lists with good performances over the rarely-competed 2000m steeplechase, taking wins in 5:26.06 and 6:32.15 respectively.

In the continued absence of spectators from sporting events, a high-quality livestream allowed those keen to follow the evening’s action from the comfort of their sofas. An all-round superb event organised by Luke Gunn and his team.

There are not one but two races over 100 miles on the track to bring you this weekend (crazy, right)? At the same event, Samantha Amend broke the women’s British Record for the distance with a time of 14h34:05, taking over minutes off the 31-year old record set by Eleanor Robinson in 1990. Our full write up of the day’s action can be found here. As it happens, Zach Bitter was competing at the Jackpot 100 in the States the day before, where he completed the distance in 12h52.14. The women’s WR holder, Camille Herron, was also in action and finished fourth (14h42:18).

Elsewhere on the Track

Harrow AC’s 3000m Spring Open kicked off a series of fortnightly open meetings on Thursday, giving over 200 athletes in 12 heats the chance to race over 7.5 laps in near-perfect conditions. Fastest times on the night were recorded by Charlie Brisley (8:29.37) and Highgate’s Rebecca Johnson (9:27.25). It’s too good an opportunity to not mention that it was a good day for me as I left North London with an eight second PB (9:33.62).

Jake Smith, in his first race since pacing at the Olympic marathon trials last month, stepped down in distance to run his first 1500m in three years, taking six seconds off his PB (3:50.89). Not the most impressive run he did this week! James Heneghan crossed the line first the two-person 1000m ahead of Nathan Gillis.

The BMC’s Regional Races were incorporated into an open meeting at Lee Valley on Sunday, with victories for Tyler Bilyard and Holly Watson. Not wanting to mention my own running a lot, by I ran 2:11:11 in the open 800m.

Cheshire wasn’t home to the only road racing this weekend.

Wednesday saw the Croft 5k and Pitstop 10k organised by Darlington Harriers take place at the Croft Circuit to the south of Darlington. Impressive performances saw victories for Lewis Gamble-Thompson (30:23) and Caroline Lambert (35:36) over 10km, with the fastest times over 5km going to David Green (14:57) and Philippa Stone (17:05).

Whilst we are awaiting official results to be made available, Mary Ngugi unofficially ran the second fastest road 10km in the world this year at the Middlesbrough Endeavour 10K, clocking 31:41.

A run through RunThrough

RunThrough continue to host a flurry of events, with races over the weekend at the Lee Valley Velopark, Tatton Park and Goodwood Motor Circuit.

Sunday’s action at Goodwood saw races over four distances, with the fastest marathons recorded by Ollie Garrod in his second marathon this month (2:25:35) and Nicola Tarry (3:03:36), whilst Scott Overall (29:32) and Jessica Saunders (36:31) crossed the line first in the 10km (although the results do show Kim Bowling as the first female, although we are fairly sure this is a mistake (especially since his category on the results is male!). Across the Irish Sea, the ChampionChip 5k and half marathon took place, the (by far) most notable performance being run by twelve year old Emer KcKee, who clocked 16:40 in the 5k – winning in a race of adults. Incredible stuff, and hopefully a bright future ahead in the sport. Conor Bradley won the men’s race with 14:17. Half marathon victories went to scott Rankin (70:09) and Sarah Jane Cooke (79:08).

Action continues left, right and centre in America, with the Continental Tour Gold in Eugene the stand out event. It included wins for Eilish McColgan in the women’s 5000m with 14:52.44, with 3000m European Indoor Champion Amy-Eloise Markovc third in 15:17.13. Laura Muir continued a trend of Scottish victories as she clocked 4:01.54 to win the 1500m by almost three seconds.

Thanks to @jessicahull143 for pacing the first part of the race and shielding us from the wind! 😅 #worldchallenge pic.twitter.com/FWoGj0ITpC

Also, whilst not in the States, a quick shout out to Holly Mills who finished fourth at the Multistars heptathlon in Lana, Italy, with a fantastic PB of 6,180 – an Olympic and Commonwealth Games qualifying mark and goes to eighth on the UK all-time list. She ended the competition with a 2:10.84 PB in the 800m.

Editors note – James is now off for a lie down