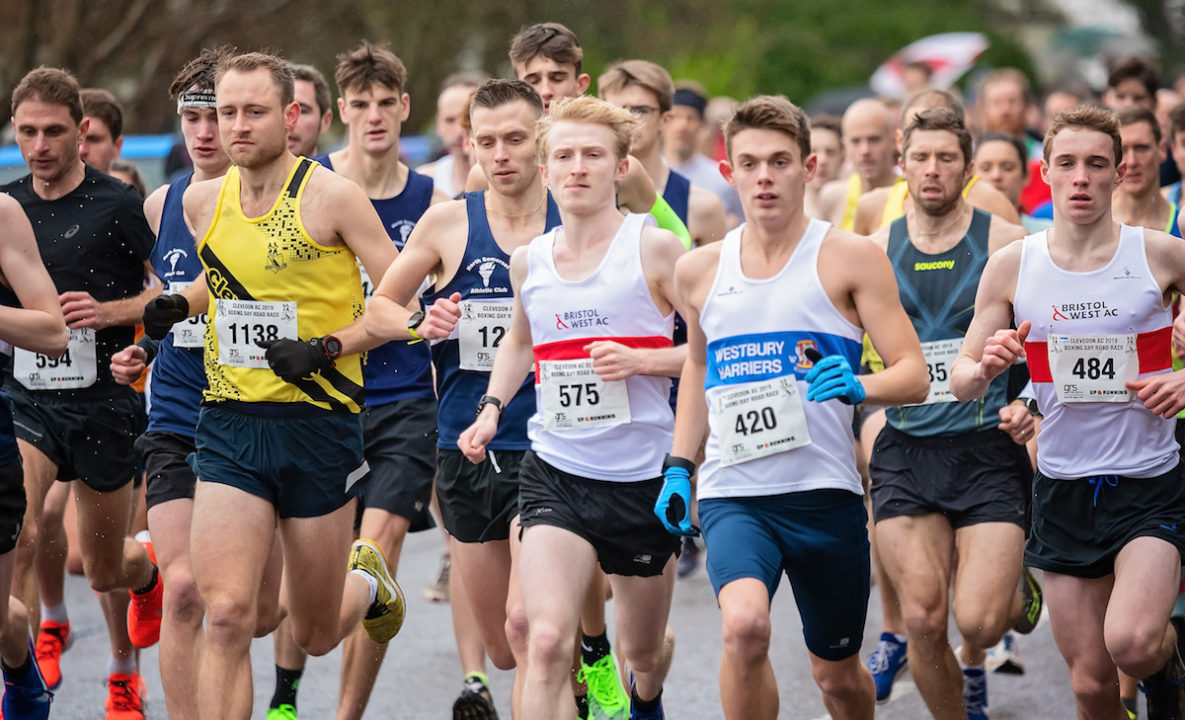 In the closing few days of 2019, PB’s are still being set as athletes take to the roads to race in 5k and 10k races across the country.

It was the Ribble Valley 10k that was the highlight of the end of the year period with some very speedy performances across the board from some high class athletes. The race also incorporated the Northern 10k road championships.

The event saw 12 men run under 30 minutes and 9 women go under the 35-minute mark. It was Jess Judd and Marc Scott who secured the titles at this years. After coming second to Beth Potter at last years’ event, Judd proved her strength and improved her position. Judd was first woman to cross the line in an impressive 32:17, a huge 25 second road personal best.

This places her 6th on the women’s UK 10k rankings, one place behind Charlotte Purdue. Judd was followed by Rachael Franklin (Manx) who had a huge race to take just under 90s off her lifetime best over the 10k distance. Franklin ran a fantastic 33:24, just 3 seconds ahead of third place. Claiming the bronze medal was Cambridge and Coleridge’s Holly Archer in her first 10k of the year. Archer ended her year on a high with a 58 second PB! A solid year for Archer!

For the men, the top three all came home in under 29-minutes. Marc Scott stole the show in the men’s race with yet another PB at the event. Scott knocked 25 seconds off his previous road best time with a finishing time of 28:32. Scott has also recently moved club to Cambridge & Coleridge; a good day out for C&C!

10k PB’s for the two of us, and Bruce slept through the whole thing🐶 29:45 and 32:17 on what we hope this time is an official 10k, and in proper old school trainers #adidas😉 worth the 7hour drive in the end and grateful to end the year with a PB after a lovely christmas 🎄🎅🏼 pic.twitter.com/K98dDeP8Ek

The race attracts top African and European talent with a separate elite race taking place after the mass race earlier in the day. The gently undulating course over laps of the Paris suburb was the location for Julian Wanders European 10km record.

The four mile Clevedon Boxing Day Race always sees a highly competitive field with clubs in Bristol and Cardiff always turning out good numbers. There was an excellent depth in this year’s race again with Bristol & West’s Felix McGrath taking the win in 20:51 ahead of team mate Andrew Chambers (21:02) and North Somerset AC man James Rodgers third in 21:35.

World Junior 1500m medallist Emma Pallant is one of the top triathletes in the world and is a two time world elite duathlon champion. Pallant has a proud winning record at this race and claimed the title again this year in 23:07. She was challenged all the way to the line a high quality women’s field with Bristol & West’s Stephanie Barnes (23:16) 2nd and 2:31 marathoner Jenny Spink 3rd (23:19). A busy week for Jamaal

The Serpentine Last Friday of the Month 5k saw 34 athletes run under the 18-minute mark. The winning time was set by Seyfu Jamaal of London Heathside in 14:42. After a year of considerable racing, Jamaal set a personal best over the distance, ending his season on a high. It is astounding to note that Jamaal ran identical 15:08 parkrun’s either side of the race on Christmas Day and the Saturday after the race! Club mate Jem O’Flaherty ran himself to a second place finish in 15:11, a 17 second lifetime best for the distance. Coming in third for Bideford AAC was Jack Hutchens in 15:25.

The top three women also came in with speedy times, all under 19-minutes. Melissah Gibson of Ealing Eagles ran herself to a gold medal in 17:54, a huge 90s PB. Sarah Hanley was 2nd in 17:56 with 18:10 for April James-Welsh of South London Harriers in 3rd ahead of Megan De Silva (Ranelagh Harriers) who crossed the line in 18:26.

The Tilli 10k also took place this weekend. The majority of the race follows the Devon Way before peeling off for a 1km loop and then rejoining the Way and heading towards the finish. This year saw a high quality field turn out with two sub-30 minute times.

It was Lamar University athlete, Jamie Crowe, that took home the gold. After an impressive 8th place finish at the Liverpool Euro Trials at Sefton Park, Crowe proved his quality on the roads too. He crossed the line in a blistering time of 29:19, a huge 24 second personal best. In second place was Grant Sheldon of Cambuslang in another impressively quick time of 29:49. Sheldon set his personal back earlier in the year at the Scottish 10k champs where he finished second. Rounding off the men’s podium was Alastair Hay, shortly behind Sheldon in 31:00.

There was also some very high quality running in the women’s race with the top three finishers all dipping under the 37-minute mark. U23 Glasgow Uni athlete, Annabel Simpson, ran a strong race to earn herself the win in a cracking time of 34:56, just 14 seconds off her personal best. Just 10 seconds behind Simpson in 35:06 was Fiona Brian (Metro Aberdeen). Brian boasts an impressive 2:42:51 personal best over the marathon distance. The third female finisher was Claire Bruce (Metro Aberdeen) in 36:38, her best time of 2019.

Great morning at the brilliant Tilli 10k! Big thanks to @phracingclub for putting on a really slick 10k! Top event 👏

Wins for @Jamescrowe7 in a super fast 29:20* and @belliesimpson in 34:55*. TRS well represented with both of us + wives + plenty listeners out in force!

Boxing Day also saw the Round the Lakes 10k in Poole. Despite extremely windy conditions, athletes did not fail to give strong performances. William Bryan of Southampton Athletics Club was first over the line in a cracking time of 32:14. Bryan was closely followed by Thames Valley’s Dan Mulryan in 32:30. Rounding off the podium with yet another Southampton athlete was Sam Costley in 32:39, not far off his personal best time for this year.

The Brocagh Bay 10km also saw the winner take home the gold with a clear lead. Colin Heron ran himself to victory in a time of 32:41. It was the top two women who had storming races for Armagh AC, finishing 3rd and 4th overall. Danielle Fegan ran herself to the overall bronze medal and was the first female finisher in a time of 35:55 in her first and last 10k of 2019. Fegan was followed by club mate Natalie Hall, in 37:43.

There were also some speedy performances over other 5k races. The Brocagh Bay 5km saw Loughview AC’s Ethan Dunn take home the gold medal with a time of 16:40. Elaine McGuckin was the winner of the women’s race in 18:29 in her 5k debut.

The Cavan 5k was won by Ben Brunton with a strong time of 15:46. Niall Smith was next across the line in 16:44 and Shane McCaul was third in 17:12. Catriona Mullen had an absolutely storming race to finish in third place overall. She stopped the clock at 17:07. Irish marathon legend Catriona McKiernan claimed the second place finish in 17:46 and Rachel Birt completed the top three in 18:28.

In keeping with the festivities was the Ayrodynamic Turkey Trot 5k. The top three male finishers were all U17 athletes putting in excellent performances. Reuben MacDonald (Giffnock North) ran an impressive race to finish first in his 5k debut. He clocked a time of 16:21, 9 seconds ahead of Cameron Green (16:30). The third place finish went to Jonathon Downey in 17:14, also in his 5k debut. It was Hannah Terrance who secured the win for the ladies. Terrance knocked a whole 2 minutes off her lifetime best set back in 2010. Under 15 Iona Stroma Hubbard was second in 20:14 with Morven Hubbard 3rd in 20:28.

The Turkey Trot also saw a 10km race taking place. In a run that was definitely more than a trot, Alasdair Campbell took home the winning title in a time of 31:44. Campbell was followed by Greg Templeton in a solid 33:24 and Colin Whitby in 33:27.

First woman across the finish line, with a time of 39:09, was Jill Smylie of Giffnock North. Next was Amy Vincent of Edinburgh AC, in an impressive PB time of 39:53. Completing the women’s top three was Lucinda Beresford (Westerlands Cross Country Club) in 40:06.