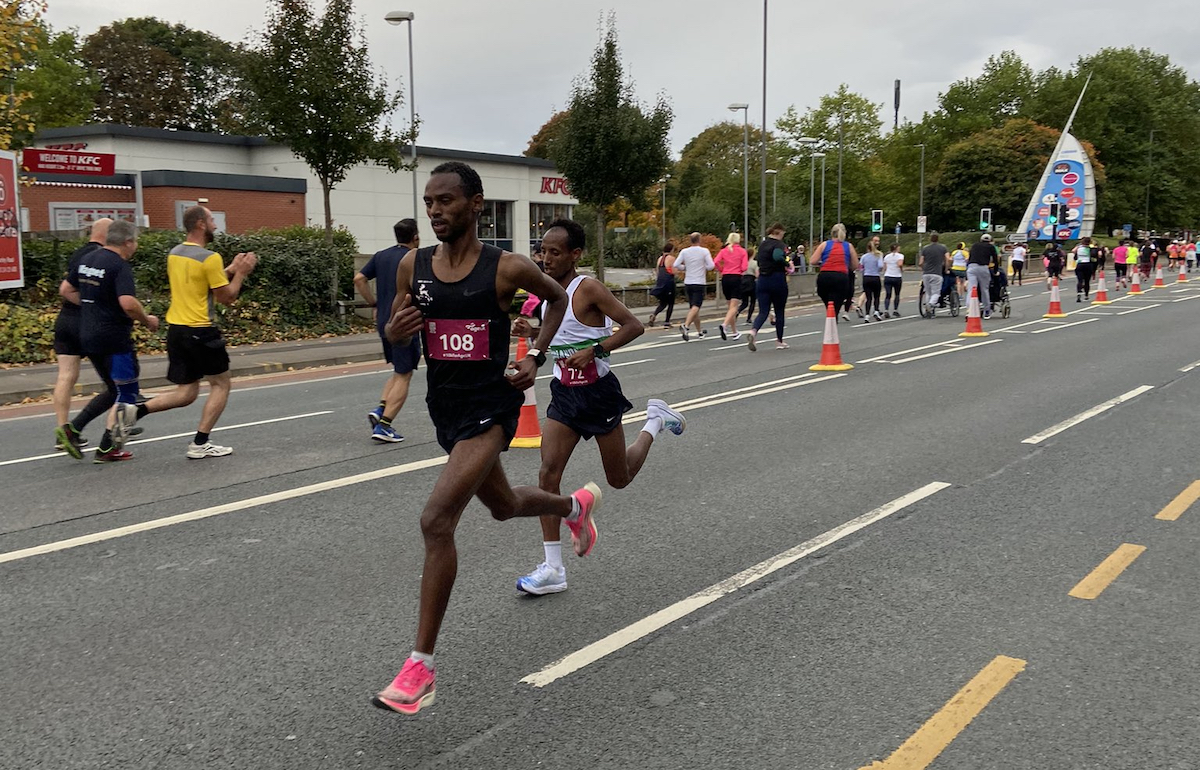 From Valencia to Leeds and everything in between the weekend delivers astounding results.

A World Record and European Record, countless PBs National Cross-Country glory. There’s everything to cover from this week so let’s take a look at the global scene first. Yalemzerf Yehualaw had been touted as a contender for the WR after breaking it at Antrim earlier this year, a time that was denied ratification. Yehualaw  did indeed break the record, finishing in 63:51 but it was only good enough for second as Gidey led the whole race. Sheila Chepkirui finished third with 64:54. Ireland’s Fionnuala McCormack ran a fantastic race and goes home with a new PB of 69:32.

Kenya dominated in the men’s race, filling nine of the top ten positions. Abel Kipchumba won the race with a time of 58:07a world’s best for this year. Rhonex Kipruto was next in 58:09 and Daniel Mateiko third in 58:26.

Clara Evans continued her rise up the Marathon ranks, bettering her Olympic Trials time to take fourth at Rotterdam Marathon in 2:31:19. Kerry Prise was next UK athletes, running 2:50:55 for eleventh. In the men’s race Bashir Abdi set a new European record, running 2:03:36. Jake Smith was on pacing duties, running his third fastest half marathon in the process!

Leeds Abbey Dash has to take the home-turf headlines this week.  The race is known for attracting a fast field and providing a course that gets the best out of them, but this year was something else.

As our resident stat-man James Rhodes points out, prior to today, 32 GB men had broken 30:00 for 10k this year. Today, 27 guys did it today at the Leeds Abbey Dash.

The top three of those were Kadar Omar who won in 28:46, smashing his PB of 29:12 set earlier this year at Cardiff Bay 10k. Right behind him was club-mate and fellow Ethiopian Omar Ahmed in 28:50 and David Mullarky was third in 29:13 – also a big PB. The women’s race easily matched that quality as the top three all went sub 32 – something that only two ladies had  done prior to today. Jess Piasecki stormed to the win in 31:19 bettering her previous best of 32:01 which was only set in September and putting herself fourth on the all time list.

Charlotte Arter upgraded her best to a time of 31:30 for second place and Jess Judd took her frustration about the recent funding announcements out in the best way possible by smashing her 10k best and taking third in 31:38. On top of that six ladies ran sub-33 and 13 sub-34.

The Lindsays National XC Relays returned after a two-year absence and this year they moved to Scone Palace, Perth.

Edinburgh University Hare and Hounds took gold in the Senior Women’s race in a combined time of 53:53 Hannah Anderson set things rolling in 13:51.95 followed by 13:58 from Katie Lowery, 13:14 from Holly Page and a 12:47 anchor leg by Megan Keith. Fife AC made their best ever showing at the event taking silver in 55:20 and Glasgow Uni Hare and Hounds took bronze in 55:49.

From nationals to regionals but no less hard-fought, the Northern Athletics Cross Country Relays took place at Graves Park in Sheffield yesterday. The Sale Harriers Manchester ‘A’ won the Senior Women’s race in a combined time of 35:20.

Triathlete Georgia Taylor-Brown set the tone by running the fastest leg of the day in 10:58 and from then on no-one else got a look in. Emma Tilley held the lead in 12:19 and Sophie Wood brought it home in 12:03.Second team wasRotherham Harriers & AC ‘A’ in 36:47 and their B team took bronze in  37:26. Fastest of all legs were:

In international cross-country news, Francine Niyomukunzi  won the 2021 Cross Internacional Zornotza, a World Athletics cross country tour gold race. Her time of 22:39 was just one second ahead of Dolshi Tesfu. Awet Habte was top man in 25:54.

Now, excuse us as we dot around the place for a round-up of the rest…

The Willen 5k saw some swift times as Jack Rose and James Orrell duked it out to finish in 15:51 and 15:57 respectively. Rosanna Andrews ducked under the 19 minute mark to take a convincing win in 18:48, holding off Frances Haines in 19:23.

RunThrough held the latest in their Chase the Moon series at Battersea Park on Saturday and it was Ben Shearer who saw off the satellite (sorry) first in 32:16 and Haley Bellerby who was fastest woman in 41:16. At their Lee Valley Velopark race on Saturday, the half marathon distance was won by Dylan Holmes Williams in 85:58 and Sarah Flanagan in 87:06 which also got her third overall.

Also in Battersea Park this weekend was the Sri Chinmoy 10k. Chris Wright ran a season’s best and was nearly a minute clear out front, finishing in 31:33. Caoimhe Nic Fhogartaigh sped away for the women’s win in a huge PV of 36:56 with Rose Penfold runner up in 37:30.

Around 8,000 runners registered for the marathon and 10K events, and hundreds more took part in the Family Mile in cool conditions ideal for fast times.

GB triathlete Adam Bowden, stormed to victory on his marathon debut. The 39-year-old led from the front and he continued to push the pace to win the men’s title on his marathon bow.

Rebecca Gallop stormed to victory in the women’s marathon to continue the record breaking day. The Newark runner held a one minute lead at 13.1 miles with Ealing Eagle Melissah Gibson chasing her down, but Gallop upped the pace to leave the chasing pack behind.

In the opening race of the day, Thames Valley athlete Paulos Surafel was on course to comfortably break the previous best 10K time of 29:43 at the halfway mark, but after slowing in the final few kilometres, he managed to take the tape just a second under Matt Clowes’ record time to add to his victories at the Kew Gardens 10K and Windsor Half Marathon. Hannah Alderson won gold in the women’s 10K race with a stunning performance to shave 22 seconds off the previous standard. Cornwall’s Imogen Ward took second in 35:32, 39 seconds ahead of Donna Morris in third. Abersoch Half Marathon was a horribly wet and windy affair today, so much that the organisers noted their respect on the results site. That being so, Russell Bentley (71:50) and Fiona Carter’s (83:58) wins were even more impressive!

Langdale Marathon was won by Jarlath Mckenna in 2:41:34. Catherine Williamson was first lady and ninth overall in 03:18:45. Over the Half Marathon distance Beau Smith rced home first in 70:02 and Rebecca Howard was first female in 1:42:39.

After an announcement by the Ironman group who own the  “Rock’n’Roll” run series that it would be the last year that Liverpool would host an event, there was all to run for. Matt Crehan took the win in the marathon in a time of of 2:2638 with Fay Hughes breaking the tape for the women in 3:03:14.

In the half Emma Styles saw of the challenge of England runner Kirsty Longley to win in 76:22, for the men Kieran Walker took the win in 68:09.

Sophie Grant won the Ecotrail 30km in Madeira with a fantastic display to break the tape in 3:14. Grant is building up to the 113k Madeira Ultra Trail on the 20th November and recently celebrated selection to the GB&NI Trail team for Thailand in 2022. Gloucester Elite Track 24 Race saw a couple of great female performances with Jo Murphy running over 230km to take third overall and Sam Amend fourth with 223,6km. 237km for was enough to secure second for Gareth Pritchard but it was Hungarian Norbert Milhalik who won overall, running over 252km not that long after winning the North Downs Way 100.

There were wins and CRs for Finlay Wild of LAC, and Nicola Jackson of Keswick, at Meall a’ Bhuachaille Hill Race which incorporated the Scottish Athletics North District Hill Running Championship. Wild ran bang on the hour mark last year but this time around he retained his crown in a seven second PB, finishing in 59:53.

In form Jon Albon has won the Grand Trail des Templiers race in France in a time of 6:32:19. It’s 80.9km with 3678m of up and down, with a really competitive field each year.