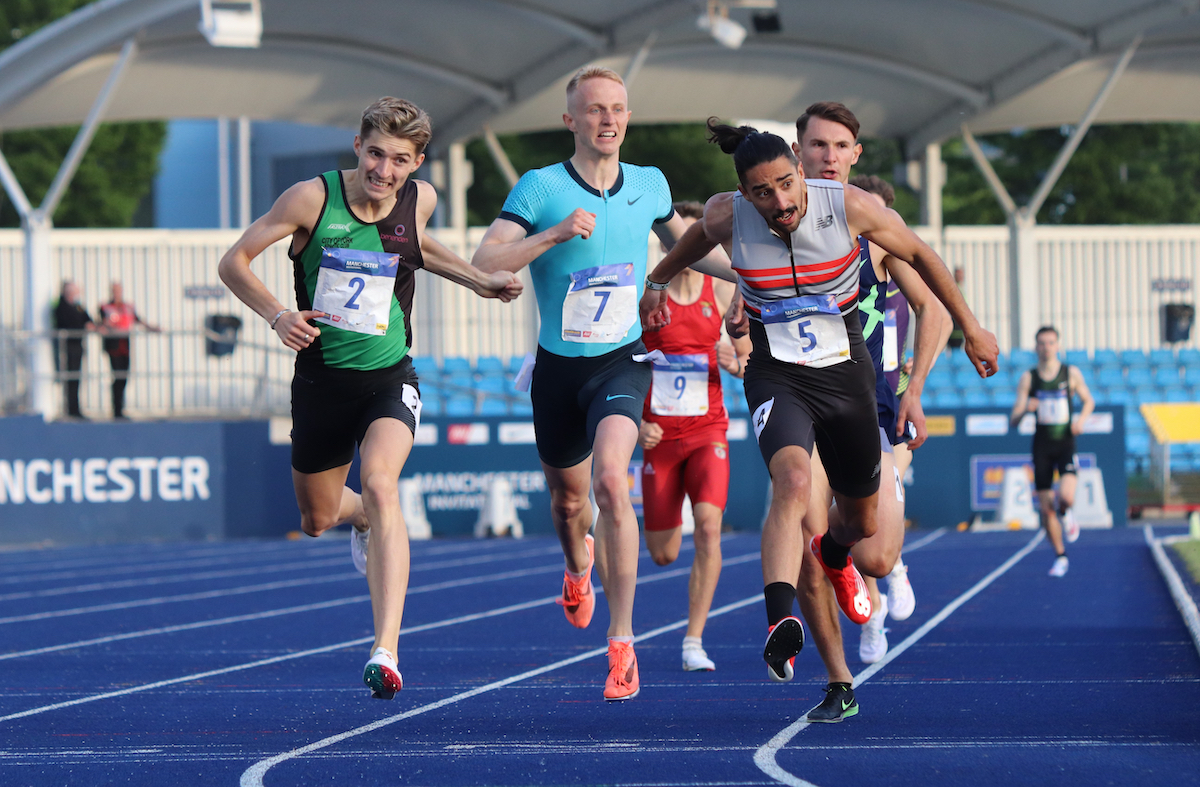 A sunny Manchester witnessed the inaugural Manchester Invitational on Thursday, a high-quality meeting organised by Bryggen Sports that aims to join the World Athletics Continental Tour Gold series of meetings for next year’s edition. Based on the quality of racing, organisation and streaming, this seems a perfectly believable aspiration.

Alongside a host of field events and shorter track races, there were exciting battles over 800m, 1500m and 5000m as athletes made the most of good conditions and competitive fields.

The 5000m races provided wins for Izzy Fry (15:42.85) and Cameron Allan (14:05.12), with both setting new PBs by 12 and 50 seconds off respectively. Izzy, having been paced to 3000m by Ciara Mageean (who earlier had raced the 800m), trailed Jenny Nesbitt for much of the race, but finished strongly to catch the Welsh athlete on the final home straight. Fry’s time

The men ran a more packed and tactical race over 12.5 laps, with Cameron making a move for the lead in the final 200m, finishing ahead of Ireland’s Connor Bradley and Southampton’s Mahamed Mahamed. The men’s race in the Diane Modahl 800m saw a field including reigning British Champion over 1500m George Mills, Spain’s bronze medallist at the 2018 World Indoor Championships Saul Ordenez and City of York’s Alex Botterill. It was the Spaniard who had led for much of the race, but a fast finishing Botterill caught him on the line in 1:46:57, a fraction outside his PB set in Dessau last week. There was also a PB for George Mills (1:46.91) in fourth, a European U23 Championships qualifier.

The women’s race over two laps provided Ellie Baker and Issy Boffey with – at the time – the second fastest performances of their careers (2:01.73 and 2:02.02 respectively). Issy was also rewarded with a European U23 Championship qualifying time, whilst Ellie improved to 2:00.95 on Saturday in Poland. There was a PB for Jemma Bromell in third (2:03.16). Over 1500m there was a PB for George Hartigan (4:12.00) in the women’s race, with an incredibly close battle for first in the men’s, with training partners Adam Clarke and Henry McLuckie, both coached by Geoff Watkin, separated by less than one one-hundredth of a second (3:40.82). That’s a PB for Henry.

The steeplechase races provided wins for Aimee Pratt, who fell five seconds short of her bid for an Olympic qualifier (9:35.35) and Ireland’s Brian Fay (8:33.93). There was also a PB for Daniel Jarvis in second. Pratt’s time did secure her a Commonwealth Games standard and won her the £500 best women’s performance by the British Athletics Supporters’ Club.

The feedback after the meeting was fantastic and we hope it becomes a fixture in the UK racing calendar.