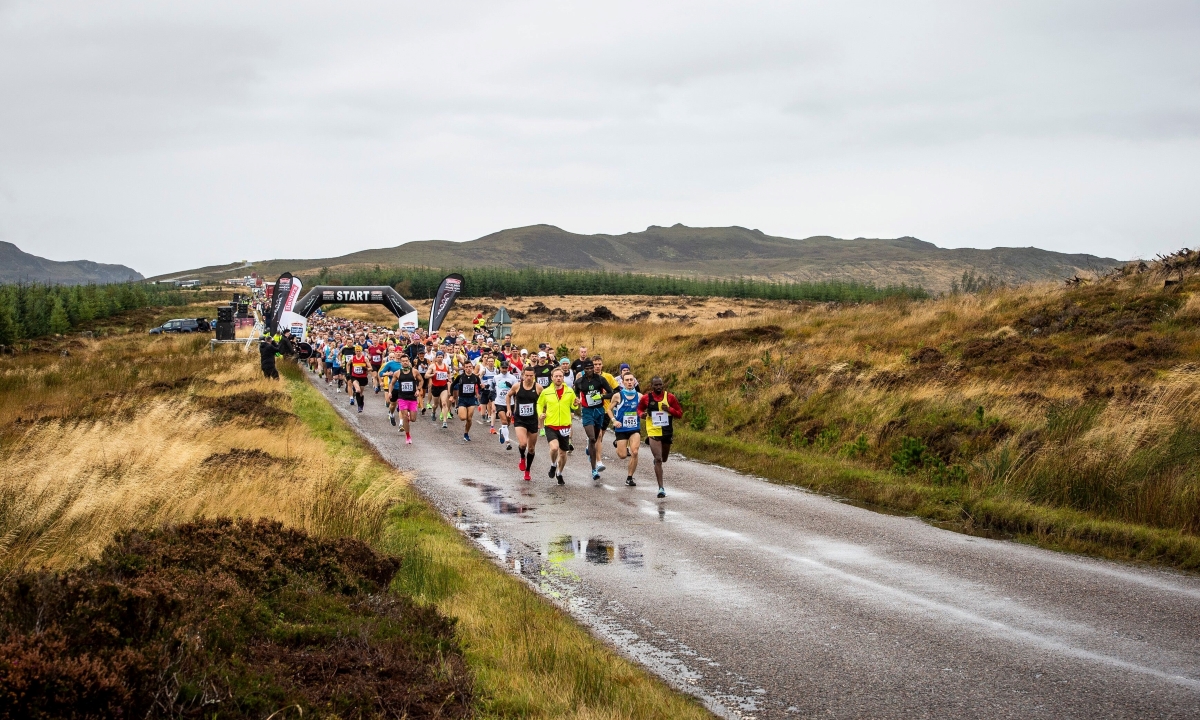 Over 9,400 runners tackled the beautiful and challenging marathon course, the super fast 10km race and the accessible 5km and junior races.

Amongst thousands of runners and supporting spectators, Isaiah Kosgei from Metro Aberdeen RC came through to win the 26.2-mile event in a time of 2:29.31. Katie White from Garscube Harriers was the winning female athlete setting an 18-year marathon record with an impressive time of 2:42.03.

White’s time is particularly impressive given the challenging nature of the marathon course and having run 76:22 only a week before at the Great Scottish Half Marathon.

44 year old Kosgei has a marathon best of 2:09 and this was his first win over the Loch Ness course having finished 3rd last year behind Mohammad Aburezeq and Adam Holland.

In the men’s race 2nd place when to Andy Hobdell coached athlete Nick Harris-Fry in 2:36:30 has he builds up to Valencia Marathon on December and 3rd place went to Ed Rees of Clapham Chasers 2:37:07. One of the UKs fastest 10km courses

In the Baxters River Ness 10K, the first male over the line was Cameron Strachan from Metro Aberdeen
RC in a time of 30:31. Shortly followed by leading female, Megan Keith from Inverness Harriers AAC in
34:42.

Loch Ness Marathon coach, Tom Craggs, said “the 10km course is one of the fastest in the UK and should appeal to performance focused runners looking to nail a PB”

The oldest competitor in the Loch Ness Marathon was Roger Macmillan from Canada who at the age of 82 travelled from Canada to complete his 9th marathon at Loch Ness, proving to the hundreds of children under 5 taking part in the Wee Nessie that they had a long way to go to beat his milestone.

Runners have again been dedicated to helping raise thousands of pounds for charity. Official charity partner Macmillan Cancer Support hope to receive in excess of £75,000 to help people living with cancer and their families.

Renowned as one of the most scenic and beautiful marathons in the world, runners came from over 45 countries to take on the route that starts between Fort Augustus and Whitebridge before following a spectacular route along the south-side of Loch Ness into Inverness.

Thousands of entrants for the other distances took to the streets of the Highland capital before finishing collectively at Bught Park on the banks of the River Ness. Commenting on the 2019 event, Race Director Malcolm Sutherland said, “What a fantastic event it’s been, welcoming thousands of new and returning faces to the Highlands. The atmosphere all weekend has been remarkable and the energy around the finish line is unprecedented.

Seeing the event grow to record numbers over our rich 18-year history has been a highlight – it’s become a staple in the Scottish sporting calendar. Entries for the 2020 race are now open and we look forward to welcoming you all back next year for our 19th event.”

Audrey Baxter, executive chairman and group CEO of Baxters Food Group, said: “We are so proud to
be the title sponsor of the Loch Ness Marathon for the 18th year running. The event continues to reflect the company’s commitment to supporting the local community and providing food full of goodness to encourage a healthy and active lifestyle.

We are delighted to have been part of the event from the beginning, working with and supporting the team to help make the Loch Ness Marathon & Festival of Running the world-class event it is today. Well done to all the runners who took part in this year’s races!”

Early bird entry for the 2020 Baxters Loch Ness Marathon and Festival of Running, which takes place on 4th October is now open. Sign up for the 2020 races at www.lochnessmarathon.com