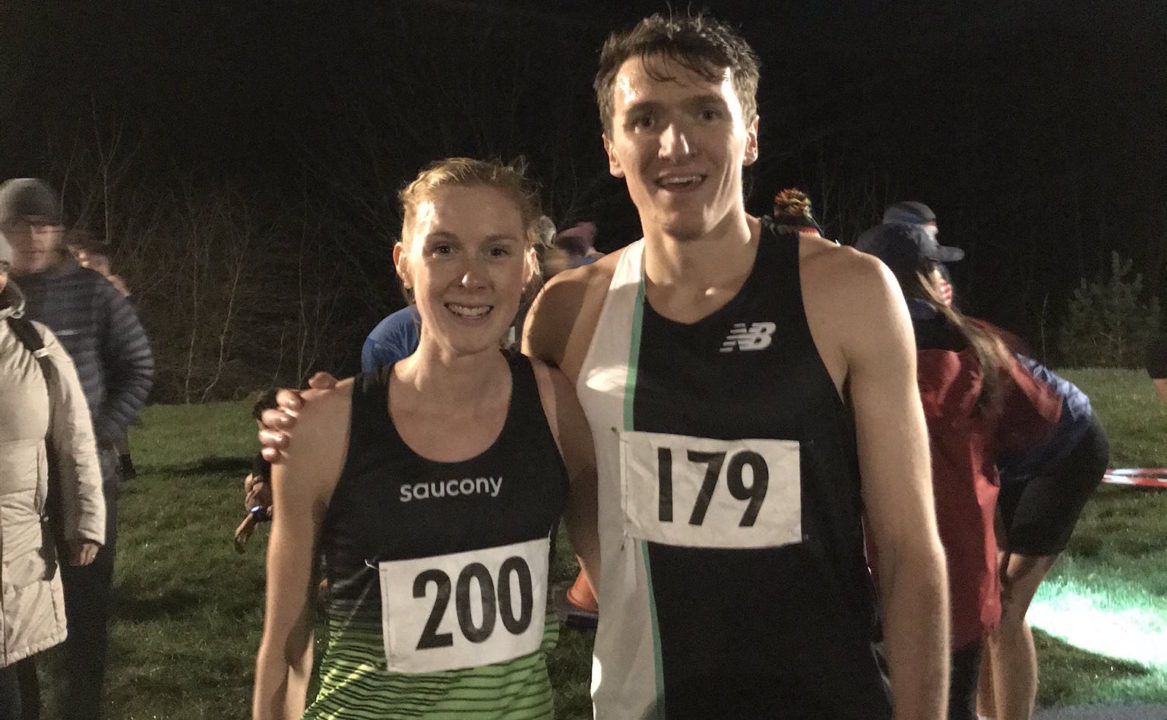 Amidst uncertainty over racing calendars and multiple cancellations, Arter and Weightman run swift Podium5ks, a Belgian champ sneaks in a Hyde Park 10k victory and Bath half is a beaut for Pollock and Briggs

As I was looking for results this week I was struck by the amount of apologetic messages from races that were going ahead. All seemed to have had a LOT of contact expressing views on each side of the cancel/don’t cancel fence.

It was always going to be a tough call for race organisers this weekend as to whether to go ahead with their event and our sympathies go to all those who are suffering the impact of Covid-19 in whatever form that may take – financial, physical or mental. Let’s celebrate what we can this week and leave the judging to the clock as we work our way through the remaining rosta of events.

Arter & Wightman light up the Podium

Lancashire’s Podium 5k is known for being a swift one and this edition was no different. Parkrun World Record holder Charlotte Arter topped the ladies race in a blistering 15:53 (her parkrun record is 15:49 and PB is 15:39).

Jake Wightman was the fastest man on the day, breaking the tape in 14.30 (PB 14:19). Daniel Racle of Altrincham & District AC took the 2nd in 14:42, smashing his 15:39 previous best in the process. Nick McCormick of Morpeth Harriers & AC took his place on the third step of the podium thanks to a 14:44 finish.

Backing up Arter’s run were Jemima Elgood of Ilkley Harriers who took eight seconds off her PB to run 16:46. Megan Davies from Sale Harriers Manchester also destroyed her previous best, running a 16:51 for 3rd.

In the B race, Sally Armitage of Ilkley Harriers was first woman in 18:52 and Jack Wilkinson was first gent in 16:45.

Strong fields still turn out for Bath Half

Bath Half Marathon seemed to take the full force of social media criticism. One of the UK’s biggest half marathons the race drew criticism from MPs and doctors at the local hospital. Former winner, Kate Read, expressed surprise at the race’s decision to proceed. Many good athletes decided to not race but despite this there was some impressive depth in the results. Whatever you think, it’ll be a race to remember for several reasons for Paul Pollock (Kent AC) and Becky Briggs (City of Hull). 2:10 marathoner, Pollock broke the tape in 64:04 this morning. Briggs, who debuted for GB at the Junior Cross championships in Denmark last year, set a new PB to take the women’s crown in 74:34.

Second and third in the women’s race went to Phillipa Williams (Sheffield RC) and Rachel Felton (Shaftesbury Barnet) in 74:34 and 75:01 respectively. For the men, it was Central AC’s Jamie Crowe who took silver in 74:38 and bronze went to Hercules Wimbledon’s Jonathan Cornish with a 75:17. The race saw 24 men dip under the 70 minute mark and eight women run under 80 minutes.

The Bath Half Marathon should not go ahead tomorrow. Here’s my full statement: pic.twitter.com/IHH1excswA

In South London the Croydon Half Marathon also ploughed ahead and Daniel Gaffney made lemonade out of those lemons by setting a course record to break the tape in 70:47. Ben Chown (26.2 Road Runners Club) was right on his tail in 71:00 and Alix Ramsier chased down third place in 72:34.

Brentwoood Half Marathon boasted two under 70, as Paul Whittaker of Thurrock Harriers won in 67:55 and James Conner of Havering AC clocked 69:11, leaving Billericay Striders’ Crispian Bloomfield in their wake to take third in 72:48.

However, the Striders stood at the top of the podium in the women’s race after Alexa Joel beasted her way around the course in 80:47 to set herself a rather tasty new PB. Catrin Tyler (Heathside) took the next medal position in 81:22 and her clubmate Rebecca Piggot was third in 82:06.

England International Kirsty Longley was on to win Knowsley 10k outright but was sent the wrong way by a marshall and so her huge course record (34:17 despite running long) doesn’t feature in the results with the male win going to Aiden Moyles in 36:18 and Lisa Gawthorne in 39:44.

We’re waiting results for the Liverpool Skyline Half Marathon and 10 miler (due to be posted here).

Milton Keynes hosted a busy day of racing with its MK Festival of Running. What was probably planned as a long run to build for London became the end-game for many runners on the 20 mile option.

Marshall MK AC’s Laura Bromilow may not have beaten her time from last year but she upgraded her placing from 3rd to 1st and can go home triumphant after finishing with 2:14:08 on the clock. Sharon Wright of Harlow AC was second in 2:14:54 and Gabriella Moriarty (Northamptonshire Country AA) third in 2:18:42.

In the men’s competition Chiltern Harriers garnered a 1-2 thanks to Nick Hughes smashing out a 1:58:32 and staying just ahead of clubmate James Repper (1:59:25), while North Herts RC’s Mark Vaughan came tantalisingly close to #breaking2 (!) with a 2:00:06 for third.

Rounding up the week

Earlier in the week before we saw the full extent of race cancellations hit training calendars, the latest in the Run Through Chase the Moon 5 & 10k series took place. In the 5k Sarah Worley of Billericay Striders was first home for the ladies in 19:07, followed 20s later by Trent Park RC’s Cara Huckstep. Cara’s team mate Cyn Cano took third in 20:24.

In the gent’s race it was Thames Valley Harriers who took the win with Ryan Keane finishing in 16:49. Martin Murray of New Marske Harriers was second, representing the V50 field rather respectably with a 17:03. Dan Collins rounded out the podium in 17:15.

Over the 10k it was Jack Watson who took top spot in 31:14. Serpentine RC’s James McCann was a safe distance behind, taking second in 34:59 ahead of David Searle (35:20). Jenny Tilley was first over the line for the women in 39:48, though V40 runner Rebecca Ward actually ran faster, with a chip time of 38:17 – two minutes faster than her gun time. You need to get further forward Rebecca! Sarah Cox was third in 39:01.

On Friday 13th as part of the BBC’s Sports Relief efforts, the Beat Beethoven 5k took place in Media City, Salford. Whilst the BBC Philharmonic Orchestra played Beethoven’s 5th Symphony, which lasts roughly 30 minutes, runners made their way round Salford Quays just outside the BBC Sport buildings. The aim was to beat the duration of the music.

All podium placers easily aced the challenge with Simon Stannard doing so in the fastest time as he ran 18:08 for first place. Atsley & Tyldesley’s Tim Campbell came home second in 18:23 and Barnaby Gordon took third place in 18:39. In the women’s race it was the BBC’s own Sophie Raworth who took the win in 21:02, followed by Emily Simpson (21:58) and Sheila Jones (22:22).

1st lady @bbcradio3 #beatbeethoven 5k 😁 First time I’ve won a race…but im not allowed to keep the trophy! 🤷‍♀️ Great race, great fun. Thank you to everyone who turned out to raise money for @sportrelief

On Saturday, many races were cancelled but the Richmond Riverside 10k went ahead, resulting in a first place Werner Kranenburg in 36:03 and Emily Meins in 42:01.

The Benbecula 10k also took place in Outer Hebrides. It looks like a beautiful place to race. The race was won by Aaron Hoyle in 34:52 and Morina MacDougall in 43:51.

At the monthly edition of Buxton Pavillion 5k Will Spalton finished first in 18:31 and Sienna Phillips in 23:24.

Malaysia’s Wai Ching Soh who normally specialises in Tower Running broke the tape on the flat with a 34:16 as Fulham RC notched up the next two podium places thanks to Stuart Macdougall, who seems to have run well within himself for a 35:01 second place and Hassen Bedhiafi who was third in 35:21.

In the 5k edition Abi Andreev was victorious in 21:28 and for the gents Michael Rix took the honour of first place and the only sub-18 with his 17:46 run.

Unsurprisingly, the Scout-organised Dronfield 10k was a tour de force for the young lads, with the podium entirely populated by M18 category runners. Alfie Manthrope set the gold standard in 32:37 leaving Tom Shaw (33:48) and Joe Sweetnam-Powell (33:58) for dust. Heather Hatton was first female home in 41:34.

Phoenix Running’s Track Wars continued with its 3rd instalment which was a 6hr challenge. Ian Hammet covered the most ground, knocking out 76k (47.2mi) and take victory by a 6k margin over Ciaran McAneny (70k / 43.4mi) and Ben Sunkell (66.8k/41.5mi).

Ashridge Boundary Run has been on my ‘must get around to doing that’ list for a long time. 16.5miles of trails and paths around the edge of this beautiful estate sounds like a rather lovely prospect. This year it was Charlie Palmer of Bedford and County AC who ran round in the fatest time, finishing in 1:52:02. Matthew Wade of Tring RC was hot on his trai-heels in 1:52:40 and Gaetano Basiaco was next in 1:54:13.

The Endurance Life Sussex trail 10k, Half Marathon, Full Marathon and Ultra Marathon are still pending and will be released here. Herne Hill Harriers 1 hr challenge took place earlier in the week at Tooting track – we’re told that results will be posted on Power of 10 soon.

Kicking off the Commonwealths – weekend roundup