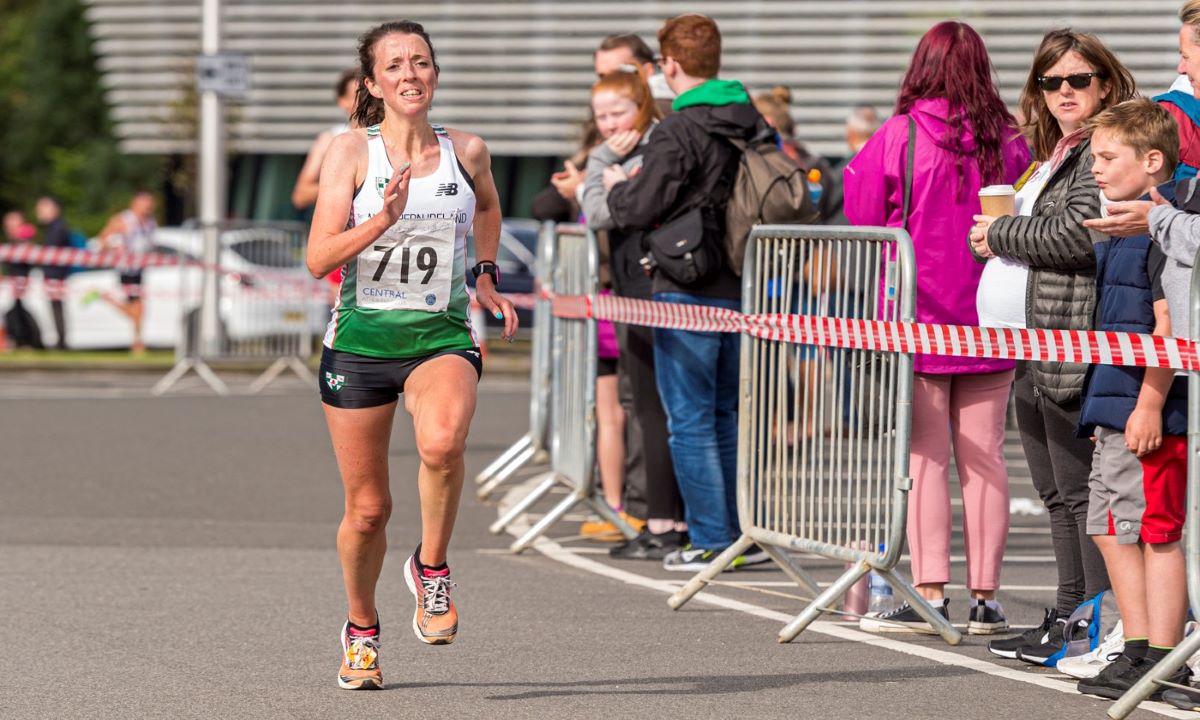 Fionnuala Ross – five in wins in a row of the Scottish title Credit: Bobby Gavin / scottishathletics

Purdue is on fine form at a record breaking Great North Run, Fionnuala Ross retains her Scottish 10k title and Finlay Wild keeps up a long winning on the fells.

With the promise of another Mo-show, the men of the Great North Run get plenty of publicity but it’s the women’s race which usually offers the most interest and this year was certainly no different. Reigning London marathon champion, Kenya’s Brigid Kosgei ran the fastest ever half-marathon by a woman to finish over three minutes ahead of any of her challengers in 64:28.

Now, that’s not technically a World Record because of the elevation profile of the course (Joyciliene Jepkosgei holds the official record for her 1:04:51 from Valencia 2017) but everyone knows that the Newcastle to South Shields course is not an easy half.

That’s one tasty Chicago Marathon build up happening right there. Magdalyne Masai, who one could argue managed to fly a little under the radar in race previews, came second in 67:36 with her sister Linet following in 67:44.

Charlotte Purdue showed the quality of her build up for the World Athletics Championships later this month by running well over a minute’s PB of 68:10 for fifth place, a time which means she’s not only GB’s third fastest marathoner of all time but also holds that honour for the half marathon too. Purdue’s stunning performance saw her taking chunks out of Mary Keitany as she stormed through the final four miles.

Things are looking good for team GB in Doha as Steph Twell is also on the way there, though for the 10,000m, and ran a PB to finish in 70:52 and 10th place. Personal bests continued to fall further down the ranks with Hayley Carruthers continuing her rise in the elite field to run 71:05 (11th) and Notts AC’s Samantha Harrison should be mightily pleased with a stunning 12th place and more than three minute PB of 73:09.

It was two world records in a week for Aly Dixon after breaking the world 50km record last week this week it was the rather more light hearted record for fastest half marathon dressed as a super hero which she smashed with her 78:27.

Six in a row for Mo

Over in the men’s race there was the familiar tale of an early challenge to Mo, a brief moment when we thought it might not happen but then a confident finishing surge resulting in another win for the running Knight. He finished in 59:07 after taking the lead from Tamirat Tola in the final mile, leaving the Ethiopian to finish in 59:13 and Dutchman Abdi Nageeye third in 59:55.

Super Stirling for Ross and Ahmed

Whilst Tyne and Wear was host to many runners on Sunday morning, there was top notch action happening even further north in The City of Stirling 10k which included the Scottish Athletics 10k road race championships.

Fionnuala Ross (Shettleston Harriers) retained her champions crown and improved her time from last year, winning in 33:34. Charlotte Taylor-Green was a good few paces behind her this year, though she would have been only seconds last year, and took second place in 34:09. Rachael Franklin was third in 34:52. Close behind in 4th and 5th were Laura Graham (35:01) and Jenny Bannerman (35:08).

For the men, Omar Ahmed finished in a much faster race than last year in a blistering time of 28:53. Grant Sheldon (Cambuslang Harriers) ran over a minute faster than last year but perhaps frustratingly for him, it still gained him the same placing, his 29:27 earning him a silver. Bronze was the reward for Central AC’s Jamie Crowe who also dipped comfortably under the 30 minute mark with a 29:49. 2018 England 10,000m Champion Ollie Lockley also finished inside 30 minutes clocking 29:54 and Alistair Hay was 5th in 30:11. Brits perform on the fastest 10km course on the planet

Talking of speedy 10ks, it’s worth noting that in the Birell 10k in Prague on Saturday evening results in two, yes two women running sub 30 for a road 10k. That’s the second and third fastest times ever in the world for Kenya’s Sheila Chepkirui and Dorcas Kimeli who both ran 29:57.

Clara Evans was first GB female over the line in 33:50. While the men’s race was still fast, it wasn’t quite so eyewatering, though it did have the excitement of a pace-maker who refused to drop out. Paul Graham (Pontypridd Roadents) was first GB gent in 30:49 followed closely by Norman Shreeve in 30:55 with the familiar name of Nick Samuels finishing in 31:07.

Miles on the road

On the road around the UK

Lake Vyrnwy Half Marathon saw some stunning performances with Jonny Mellor winning in 64:36 just ahead of Andrew Davies in 64:46 with Jack Pickett third in 67:58.

On Saturday there were a slew of Run Through races taking place in Victoria Park (what is the collective term for non-track races? Is it still a ‘meet’? Answers on a postcard). The most notable results came from the Half Marathon. London City AC’s V40 Caoimhe Nic Fhogartaigh was victorious in the women’s race in a PB of 1:24:20 while an even more local lady, Mandy Dohren of Victoria Park & Tower Hamlets AC was second in 1:26:20.

Polly Warrack rounded out the podium in 1:31:57. For the men, Matt Chipping led the charge to the line in 1:11:49, an improvement on his Leeds HM time from May of 1:12:49. That said, he probably didn’t really need to charge very much given that James Sullivan was nearly 5 minutes behind him in a second place time of 1:16:32 and was himself holding off Florian Montemat’s 1:16:39 third place.

Chippenham Half Marathon was a touch faster than those London results and was won by Tom Merson (Devon County) in 1:06:09. Simon Nott (Calne RC and Ben Cole (Swindon harriers) were behind him in 1:08:04 and 1:09:16 respectively.

For the women’s, Sidmouth AC’s Kirsteen Welch was first in 1:20:15. Welch was a recent winner of the GB trial for the World Mountain Runing Championships. Bristol & West Ac’s Annabel Granger was shortly behind her in 1:20:25. She was one minute clear of Cornwall AC legend Emma Stepto.

Earlier in the week the Edinburgh edition of the Sri Chinmoy Self transcendence 5k series resulted in a 15:06 win for Tom Martyn with Peter Avent in second (15:11) and July’s winner Martainn Ramsay (15:43) only managing third this time. 20:35 was enough for a win for Wendy Malkin. Cath Ferry was second in 20:44 and Hannah Graham third in 21:07. On the mountains and fells

Despite damp, cold conditions in Switzerland Robbie Simpson took his third victory within four years at the Jungfrau Marathon, conquering the course from Interlaken to Kleine Scheidegg in 2:59:29. Simpson didn’t take the lead until around the 32km mark having found it tough going earlier in the race but powered up through the final kilometers to win over 2 minutes clear of his nearest rival.

On more local inclines Finlay Wild made it ten victories in a row at the Ben Nevis Race with a time of 1:32:05. Just behind him in the legendary race ascent and descent of Britain’s tallest mountain were Lochaber AC teammateJohn Yells and Sam Fisher (Howgill). First for the ladies was Sarah Graham of Mourne Runners was first back down in an unconfirmed time of 2:12. Second and Third place are to be confirmed.