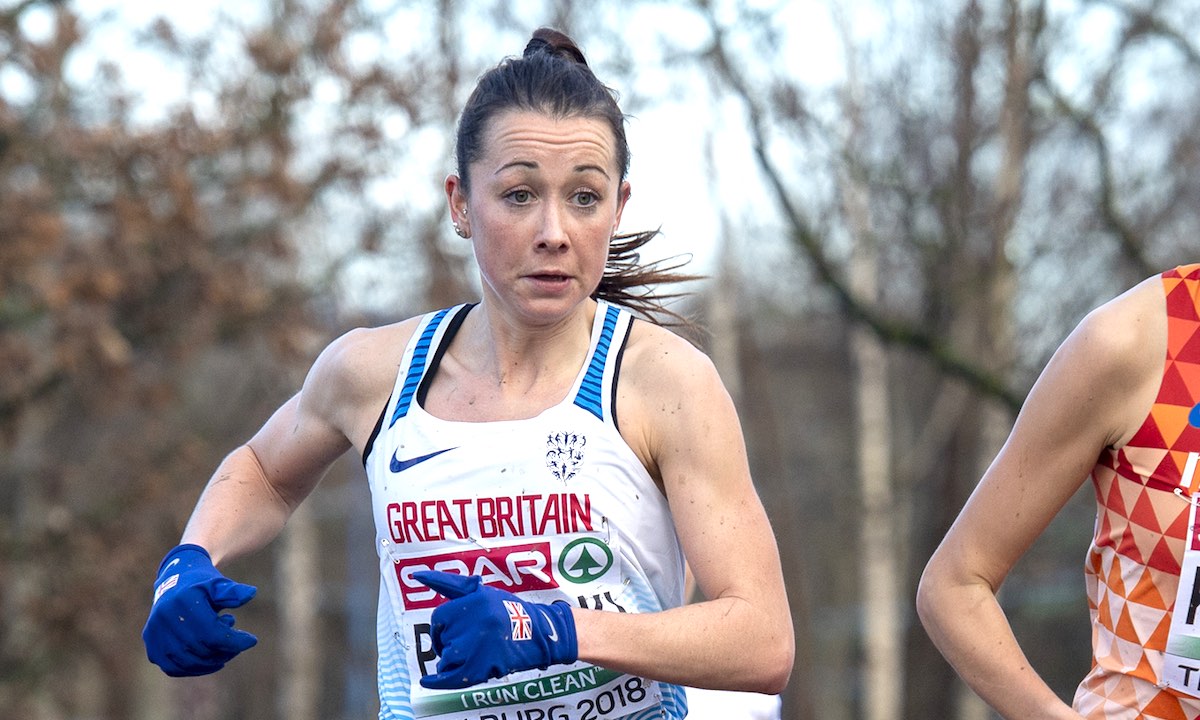 There may have been stormy weather, but that has not detracted from another week packed with superb performances. Let me run you through some of the highlights.

Last week, I started the round up by lamenting the weather and bringing you news of Eilish McColgan’s exploits on the roads in Dubai. It is a case of déjà vu, as I do exactly the same this week. Whilst Storm Eunice has been playing havoc with racing and travelling plans of many at home (more of that to come), Eilish McColgan has been continuing to show her record-breaking form with a 66:26 at the RAK Half Marathon.

The event, held in Ras Al Khaimah in the United Arab Emirates, is a notoriously fast course and Saturday’s race was no exception, with Eilish significantly improving on her debut at least year’s Great North Run and taking 21 seconds off Paula Radcliffe’s British Record in the process (it is worth noting Paula ran 65:40 at the Great North Run, but its elevation profile and point-to-point nature mean the course is not eligible for record purposes).

Despite the exceptional performance, that time was only good enough for sixth. Ahead of her, Girmawit Gebrzihair Gebru, took the win in 64:14 in her half marathon debut, followed by Hellen Obiri (64:22) and Sheila Chepkirui (64:36). Those times place the trio in fourth, fifth and seventh on the all-time list respectively.

World Record holder Jacob Kiplimo took victory in the men’s race in 57:56, a time that only Kiplimo, Kibiwott Kandie and Rhonex Kipruto have bettered. Such is Jacob’s emerging dominance in the event, he owns three of the six sub-58:00 performances in history.

Eilish was not the only athlete racing abroad chasing a fast time; a plethora of Brits took to the streets of southern Spain in search of qualifying times for the World Championships, Commonwealth Games and European Championships at the Seville Marathon.

The highlight of the action came from Jess Piasecki, who obliterated her lifetime best with 2:22:27, a time that elevates her above Mara Yamauchi to second on the British all-time list; only Paula Radcliffe has run quicker. It was a well judged run from Jess, passing through halfway in 70:33, who has had a fantastic 12 months including PBs at 10k, 10 miles and half marathon, and of course her debut Olympics.

Oh my days that was hard!

So pleased that the last few months (and years…) of work have paid off.

Behind her, Rose Harvey continued her magnificent rise over the distance, improving to 2:27:20 to be the tenth fastest Brit in history. That time is also a World Championships qualifier, a mark five women have now bettered. After running alongside her clubmate and training partner for the early stages, Steph Davis had a tough last third and finished in 2:37.41.

The men were in equally impressive form. Josh Griffiths (2:11:27) and Andy Davies (2:14:23) both ran PBs alongside European Championship and Commonwealth Games standards, the latter improving his own M40 British Record. Mo Aadan (2:12:37) was the second Brit across the line, finishing just 17 seconds shy of his best from last year’s Olympic trials at Kew Gardens.

Saturday saw a welcome return of top-tier indoor athletics in the UK with the Muller Indoor GP Birmingham, the next stop of the World Indoor Tour Gold. With a sell out crowd and a host of superb athletes competing, it was rather special to be there in person, no more so than to hear the noise for Keely Hodgkinson’s last lap over 800m as she broke the British Indoor Record (1:57.20).

That time puts her sixth on the all-time list indoors and is not only the fastest OF her life, but the fastest IN her life, as no one has run faster since the precise day she was born – when the World Record was set.

Back to the results. Another good outing for Elliot Giles see him finish second in the 800m with his fastest time of the season (1:45.42), with Guy Learmonth running an indoor PB and World Indoor Championships qualifier (1:46.46) behind.

After the withdrawal of Laura Muir due to injury, the women’s 1000m field was left more open, and Issy Boffey, running just down the road from her training base at the University of Birmingham, recorded one of her biggest senior race victories with 2:38.25 in her debut at the distance. Jemma Reekie had led for much of the race, but faded in the last lap to finish second (2:39.74). Georgie Hartigan was seventh with a new Irish Record (2:40.01).

The women’s 1500m saw strong runs by 3000m European Indoor Champion Amy Eloise Markovc (4:08.68 PB) and Erin Wallace (4:08.90 PB), the duo becoming the first athletes to run the World Indoors standard this year. The men’s race over the same distance had been touted as an attack at Peter Elliot’s longstanding British Record; however, it did not quite live up to its billing and the record lives to see another day. George Mills, however, continued his fine start to 2022 with a fourth placed finish (3:36.03), taking almost three seconds off his PB set last weekend, with a PB also for Piers Copeland in fifth (3:36.12). Also competing were Charlie Grice (3:39.59), Archie Davis (3:44.32) and Neil Gourley (3:52.08), whilst Jake Wightman did not finish.

Two days earlier, the World Indoor Tour Gold stopped in Lievin in France and the Meeting Hauts-de-France Pas-de-Calais. Elliot Giles ran over 800m (1:46.50), but the highlight of the evening was Jakob Ingebritsen taking almost half a second off the 1500m WR (3:30.60).

To the Mud (Literally)

This weekend was the traditional end-of-leagues weekend, as the cross country season looks towards next weekend’s Nationals at Parliament Hill. Sadly, however, a number of cross country fixtures were victims of Storm Eunice, with the Met League, Kent Fitness League, Derby Runner League and some races in the Surrey Leagueall suffering from cancellation.

One fixture that was not cancelled but was subject to a somewhat surreal set of circumstances was the Chiltern League. We hear that the landowners ordered the course be cleared swiftly mid-way through the senior men’s race, or the police would be called. Sure enough, the police were called, and some athletes were forced to either abandon their runs, avoid landowners in golf buggies or not start at all. Truly bizarre.

There are no results for the senior women’s race as a result, although Strava shows some women did run at least part of the race. Jack Goodwin took the honours in the senior men’s race ahead of Richard Slade and Ben Cumberland. All the drama from our reporter live at the scene

Croydon Harriers’s Dominic Nolan took his third victory in as many races in Division 2 of the Surrey League at a home fixture at Lloyd Park, helping to secure Croydon’s promotion to Division 1 next season. The Division 1 fixture at Effingham Common did not take place, neither did the ladies races.

George Beardmore was victorious in the senior men’s race at the Birmingham League (for which women’s races do not appear to have taken place this weekend), whilst Elena Carey took the honours in the combined senior, veteran and U20 women’s race at the Hampshire League ahead of Pippa Roessler and Charlotte Calwin. Some result queries mean the men’s results are not published at the time of writing.

The stormy weather did not stop athletes taking to the many 10k races across the country. One of the fastest races of the weekend was the Watersons Hale 10k, where victories went to Sophie Wood (35:25), crossing the line over two and a half minutes ahead of the next female finisher, and London Olympian Ross Millington (30:56), the only entrant to run under 31 minutes.

The next fixture of the Tempo Winter Series in Ilmington provided Donna Allen (46:41) and Andy Lawrence (37:43) with wins, whilst Shaun Hughes had an excellent run at the Ruthin 10k, finishing over three minutes before the next in the field. Llinos Griffith (45:31) was the first women home.

At the time of writing, results for the Tunbridge Wells Half Marathon and Deal Half Marathon, both of which took place on Sunday morning, were not available online, whilst the Village Bakery Wrexham Half Marathon and Run Nation’s Run London Victoria Park Half Marathon (plus 10k and 5k races) were sadly cancelled due to the weather.

One half marathon which did take place, however, was Sunday’s Great North West Half Marathon, where Josh Hall-Brown (77:34) and Ffion Williams (90:30) took wins over the Blackpool course.