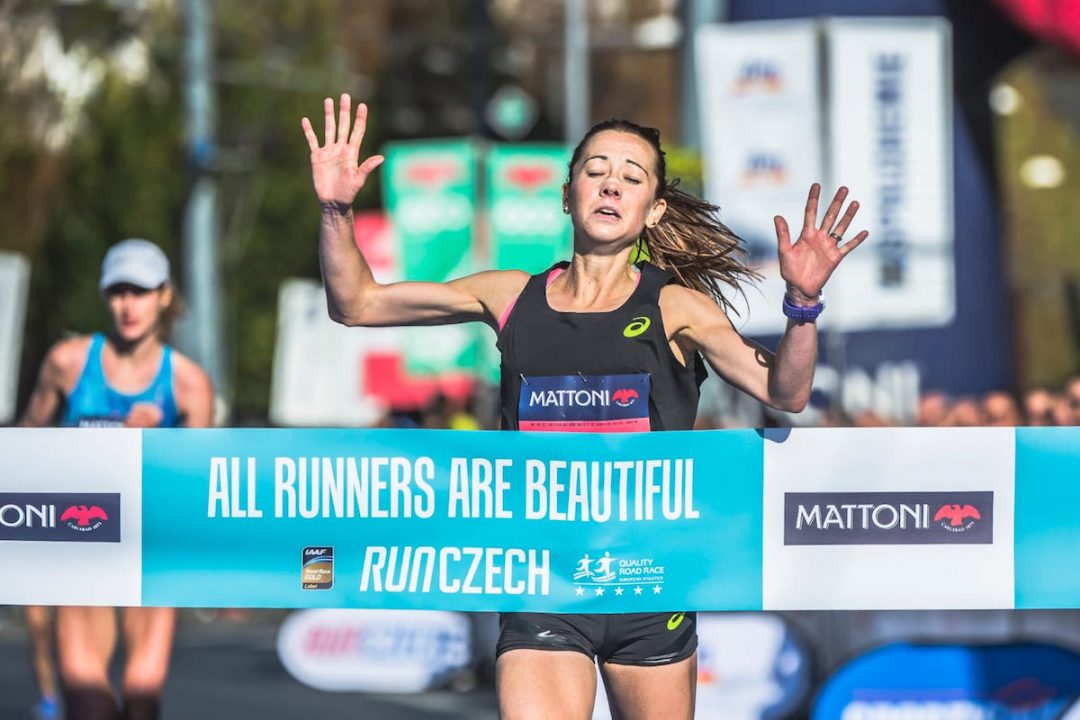 Jess Piasecki stormed to an excellent win and PB in the Czech Republic, whilst the road relays once again showcased some of the UK’s finest club running.

Brits excel in the Czech Republic

A few British athletes headed out to the Mattoni Ústí nad Labem Half Marathon in the Czech Republic and it was a very worthwhile trip with Jess Piasecki’s run the pick of the bunch.

The women’s race offered some huge surprises. A small group of runners came together shortly after setting off, but at the fifteenth kilometre mark the only two left were Jess Piasecki and Daria Mykhailova. In the end victory went to Piasecki who delivered a fantastic time of 1:11:34, enhancing her personal best by two seconds. “The time is great, though I had wanted to do it a bit faster. I mainly concentrated on beating Daria. The finish was pretty tough. It was a good performance because I’m training for the Frankfurt marathon,” the winner revealed.

Seventh placed in 1:15:31 was Bristol and West AC’s Jenny Spink, who we interviewed earlier in the year after the evergreen athlete won the Manchester Marathon. In the men’s race Josh Griffiths was fifth in a strong 1:04:23, which is a 31 second PB for the Welsh marathoner.

The road relays remain a central feature and of the British endurance running scene with all the romance of the national cross. Whilst the depth may not be what it once was when I speak to athletes road relay medals and successes are almost amongst the first mentioned and imbued with the most pride.

We had a full update on the Welsh Road Relays last week. Also taking place last weekend was the Northern Road Relays. Great thanks goes to Elizabeth Renondeau who gave us a real sense of the competition in a closely fought women’s race where just one minute separated the top five teams.

A stunning 21:12 final leg from Nicola Devine dragged Rotherham Harriers & AC (1:27:07) from 5th place through to take the win a performance which saw her finish a full 38 seconds faster than the next quickest athlete on stage four, Rochelle Harrison of Lincoln Wellington. A strong overall team performance from Leeds saw fastest legs from Matthew Grieve (leg two – 20:19) and Phil Sesemann (leg four – 19:18). Finishing leg one in 7th place 21 seconds down on the lead after the leg run by John Ashcroft (20:12), Grieve’s performance on leg two pulled them into the lead which they held and extended to the finish with efforts from Linton Taylor (20:26), Philip Sesemann, Alex Bellew (20:26) and Graham Rush on the anchor (19:50). It was actually Team Bath Ac who led at the end of leg one with Birchfield back in 7th but this had been overhauled by the end of leg four with a fine performance from William Richardson in clocking the second fastest leg of the day.

AFD and Cambridge & Coleridge victorious at the Southern’s

Cambridge and Coleridge’s women’s team clinched an exciting victory passing Reading AC in the final 200m with Aldershot Farnham and District in third. The AFD men however came out on top ahead of Serpentine in 2nd and Bedford & County in 3rd. Birchfield Harriers A (1:00:47) were women’s winners as they led from start to finish after a strong first leg from Bryony Gunn (14:55) saw them with a 24 second lead. Carli Baldwin (15:50) and Elizabeth Watters (15:41) maintained the lead but a strong run from Taunton AC’s Hannah Taunton (15:21)  saw their lead cut to just three seconds before handing over to Hayley Carruthers. The England marathoner ran the fastest leg of the day (14:21) to make the overall win look more comfortable than the numbers appear on paper.

Charnwood AC are always expected to be in the mix and they finished 2nd with 1:02:40 with stalwarts Juliet Potter (15:14) and Gemma Steel (15:02) joined by Mia Atkinson (15:32) and Eleanor Here (16:52). Charnwood were one second off the lead at the end of leg two but slipped to 4th after leg three before Gemma Steel ran the third fastest leg of the day to pull them into second.

Taunton AC were one of the stories of the day claiming bronze with a fine overall team display from Alice
Murray-Gourlay (15:26), Katie Drew (15:42), Hannah Taunton (15:21) and Kirstie Booth (16:59). Well done to club coach Charlotte Fisher for carving out one of the strongest teams in the area. Natasha Cockram claimed a huge PB to win the Admiral Swansea Bay 10km running 33:26 to take over a minute off her previous best. The Micky Morris Racing Team athlete will count this as one of the best wins of her career as she fought of a strong challenge from Clara Evans (33:35) and Jenny Nesbitt (33:46).

The men’s battle was just as right with Shaftesbury Barnet’s Kieran Clements taking the win with 30:03. Second place went t0 10km first timer Liam Dee whose incredible debut time of 30:17 was enough to see off the challenge of James Hunt (30:22) for second.

It was an incredible at Stafford 10km with first three athletes dead level on their chip times. James Egleston of Telford Harriers was the winning man with 33:42, exactly the same chip time as 2nd place Pravesh Patel and 3rd place Lee Gratton just sneaking the win by a second off the gun.

Giorgia Chattwood was the standout performer overall taking over three minutes off her PB to win in 36:05. Heaton’s Danielle Smythe was 2nd a few seconds outside her own PB in 37:46. Third was Kelly Butler in 38:40.

Thompson in back to back wins

Having won last week’s Richmond RunFest Marathon Chris Thompson won the Great Eastern Run Half Marathon this weekend in a time of 66:43, two minutes clear of Andrew Rooke of Framlingham who ran 69:38 and Danny Rock in 3rd in a PB of 70:21.

Both course records tumbled at Rutland Water Marathon with Beth West the winning woman in 3:13:54 and Phil Martin crossing the line in 2:47:17.

There was also a dominating performance in the men’s race with Gideon Kipsang Kimosop winning in 66:58 ahead of Eoin Hughes in a new PB of 68:30 and John Black of North Belfast also running a big PB of 69:12.

The Swindon Half Marathon is now in it’s third year and it was Christopher Wood of Wimborne who triumphed with a time of 73:44 in a tight race with Brendan Morris who finished eight seconds back with 73:52. Alex Smith was third with 75:13. Susannah Gill was the women’s winner running 86:57 again in a tight race just beating Rachel Owen (87:06) and Miriam Jones-Walters (87:40) to head the podium.

Douglas and Collinge win the British Mountain Championships and Trial

The British Mountain Running Champs, and the trial for the World Mountain Running Association Championships in Patagonia this November, were held on Moel Eilio, in Llanberis this Saturday. Andy Douglas, who is taking a year’s sabbatical from work to focus on his mountain running, was the star of the day, winning by almost three minutes.

Douglas, who is the current leader for the WMRA World Cup series, was running for Scotland as part of a home countries international (we’re not really sure how many races were included in this one race, it was also the final of the British Mountain Running Challenge too).

Emmie Collinge has raced sparingly this Summer so it was unsure how well she would run over the up and down course. It was a much closer race in the women’s event, with only 33 seconds separating the top three. Italy based Collinge ran 62:32, whilst Philippa Williams was 10 second back in 62:42 and Heidi Davies just another 14 seconds back in 62:55.

The men’s podium was completed by Joe Steward (55:21) and Tom Adams (55:30), a fair way back of seasoned international Douglas in 52:32. A fine performance by Gary Priestley, a man rumoured to run through brick walls as part of his training regime, saw him take fourth spot in 56:46 ahead of fell runner Chris Holdsworth.

More in the mountains

At the Salomon Skyline Scotland Ring of Steall race Britain’s Holly Page was racing again and finished 2nd in 3:54:18 behind the winner from Switzerland Judith Wyder who ran 3:36:46. Fanny Borgström was third in 4:02:01.

In the Ultra Scotland’s Murray Strain took the win in 7:51:31 with Yorkshire’s Katie Kaars-Sijpesteijn finishing 3rd overall and winning woman with 8:05:28. Finally there was a fair bit of noise in the week about a sub two hour marathon attempt on a downhill course billed as The World’s Fastest Marathon’. As with many things in life the internet billing didn’t quite live up to reality with Kenyan Antony Karinga Maina eventually clocking 2:09:38.

A tweet from the race organisers stated that he was on for sub two hours until 30km, presumably before the wheels came off – an experience familiar to many readers I am sure. We think it was Grete Waitz who said “the race starts at 30km”…