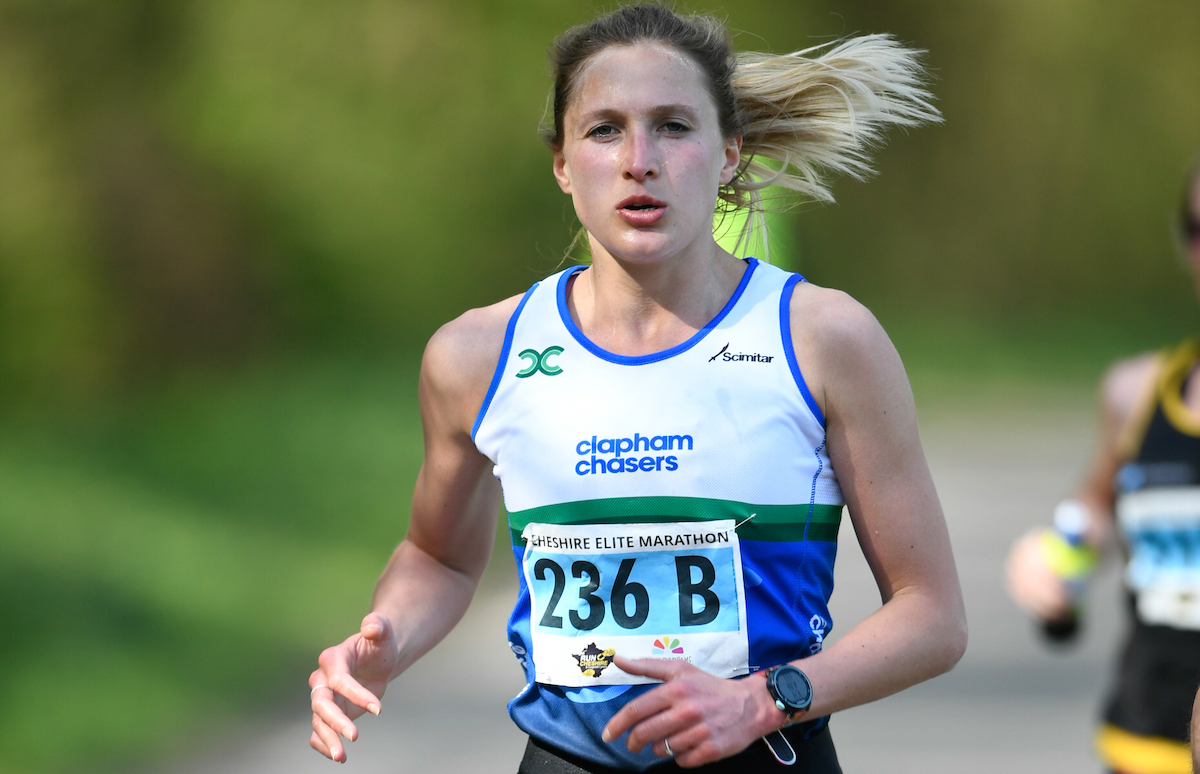 You will recall our first piece celebrated the work that Phil has done with Tokyo Olympic marathon selectee, Steph Davis, who booked her ticket on the plane to Japan with a stunning 2h27m16s in the Kew Gardens trials on 26th March.

Almost exactly one month later on 25th April to be precise, fellow Clapham Chaser, Rose Harvey, proved that lightning can strike twice with an eye catching 2hr30m58s at the Cheshire elite marathon in Pulford. Pandemic accepted but aside from a notable 75m03s recorded for the half at Dorney Lake back in October 2020, its fair to say that Harvey’s recent exploits constitute a raising of the performance in the order of the ‘meteoric’ given that she was trotting round the Commons of Tooting and Clapham in 19 and 20 mins at the weekly Saturday morning 9am recreationals we have come to miss so dearly in recent months.

Clearly the development of Davis and now Harvey, offer irrefutable evidence that the work that Kissi does is no fluke and needs unpicking.

I resume our interaction by acknowledging the proverbial elephant in the room. With sensitivity I point out that as a black and minority ethnic coach, I am intrigued as to whether people may in the past have unwittingly stereotyped him as a speed-based coach.

In pointing to a civil service career as a diversity manager for the Department of Work and Pensions, Phil’s laugh reassures me that he has realises my probing around the sensitivities of race in an age where Black Lives and dare I say black coaches matter, has been made in good faith. “Definitely, definitely, definitely!”, he affirms- “People could assume that because there are not too many BAME coaches especially in the marathon. I’d like to see more because there are some great coaches out there both black and white”.

Having asked a question relating to diversity, I am then treated to an education on the matter with Phil reminding me that his coaching across event groups, including the sprints, plus his recently being challenged to work with a high jumper, is evidence that he as a coach is unwilling to be put in a proverbial box.

I pause to reflect that this offers the first clue as to his success- namely that because he is keen to work across event specific groups, he is more finely attuned to making sure the fundamental and foundational aspects of athlete development are taken care of than some of us who would willingly frame ourselves as merely endurance based coaches.

The influence of Frank Horwill and the BMC

As an athlete, Phil was coached in the 1970s by the legendary founder of the British Milers’ Club, Frank Horwill. In 2001, he was re-acquainted with his old mentor when taking his own son Sam, a talented 800m runner, to Frank’s training group over in Battersea. “He’s much better than you ever were Phil!”, prodded the mischievous maverick, before agreeing to coach Sam on the proviso that Phil shadow him and learn his trade. Anyone who ever met Frank Horwill will know that Phil had no choice! Their working relationship and deep friendship would last until Frank’s passing in 2012.

Following his mentor’s passing, Phil would enjoy considerable success with his Blackheath and Bromley based Katy-Ann McDonald who would not only excel over two laps in terms of taking a British age group record but who would achieve success in winning her category at the English National cross country in Sunderland in 2013 and the London mini marathon in 2015.

Phil attributes the success he had with the now Louisiana State based McDonald and others to Horwill’s inculcating of the ethos of multi-tier training. The famous five-paced system of effecting 400m, 800m, 1500m, 3k and 5k specific sessions over a set microcycle was articulated in Obsession for Running (1991). In addition, Frank introduced Phil to his close ally, Peter Coe, who of course guided his son Sebastian to double Olympic 1500m gold medals in the 1980s. With evident awe, Phil eulogises that, “Coe senior gave me a different dimension to my coaching. I realised I had to tweak Frank’s multi-pace system and refine it for the individual athlete that I was working with”.

In looking both to and yet beyond the admired Horwill, this offers our third and final pointer to Phil’s success and again diversity is the golden thread.

Patrick Sang who of course guides Eliud Kipchoge in Kenya, has in Phil’s words, “Taught me that no athlete is bigger than the coach. Sang has so many top athletes but no one gets the star treatment. Every athlete is treated the same”. Whilst a big fan of the aforementioned Peter Coe, Phil gives a nod to the late Harry Wilson who guided Coe junior’s arch rival Steve Ovett to Olympic 800m gold in 1980 and whose own philosophy was espoused greatly in Running Dialogue (1982).

Phil alludes to the influence of the late Stan Long, who honed the talents of 1976 Olympic 10,000m bronze medallist Brendan Foster as well as 1984 Olympic marathon silver medallist, Charlie Spedding. Ron Holman, whose co-authored Focus on the Marathon (1983) is well worth a read, is credited by Phil as aiding his coaching development. The Cambridge Harrier based Holman used a lynchpin session of 1000m reps alternating between 50m easy and 150m hard which is compatible with Phil’s desire to inculcate the ability for the likes of Steph Davis and Rose Harvey to be able to change pace quickly.

The above being said, the addition of the Scot, Tom McNab, to his list of influences is perhaps most significant due to his work with multi-event athletes and again emphasises Phil’s conviction that the real lessons endurance coaches can learn often lie outside the boundaries of their event specific comfort zones.

Phil clearly leans towards empowerment rather than being a directive coach and for him, “you need a team behind an athlete and that includes a physio, nutritionist, S&C specialist and then for some, an agent.” Empowerment of others does not mean the abdication of responsibility or relinquishing of control.

Phil’s parting shot is that, “You’ve got to lead as a coach”. On that note, judging by the progress of the aforementioned Davis and Harvey, he clearly is….