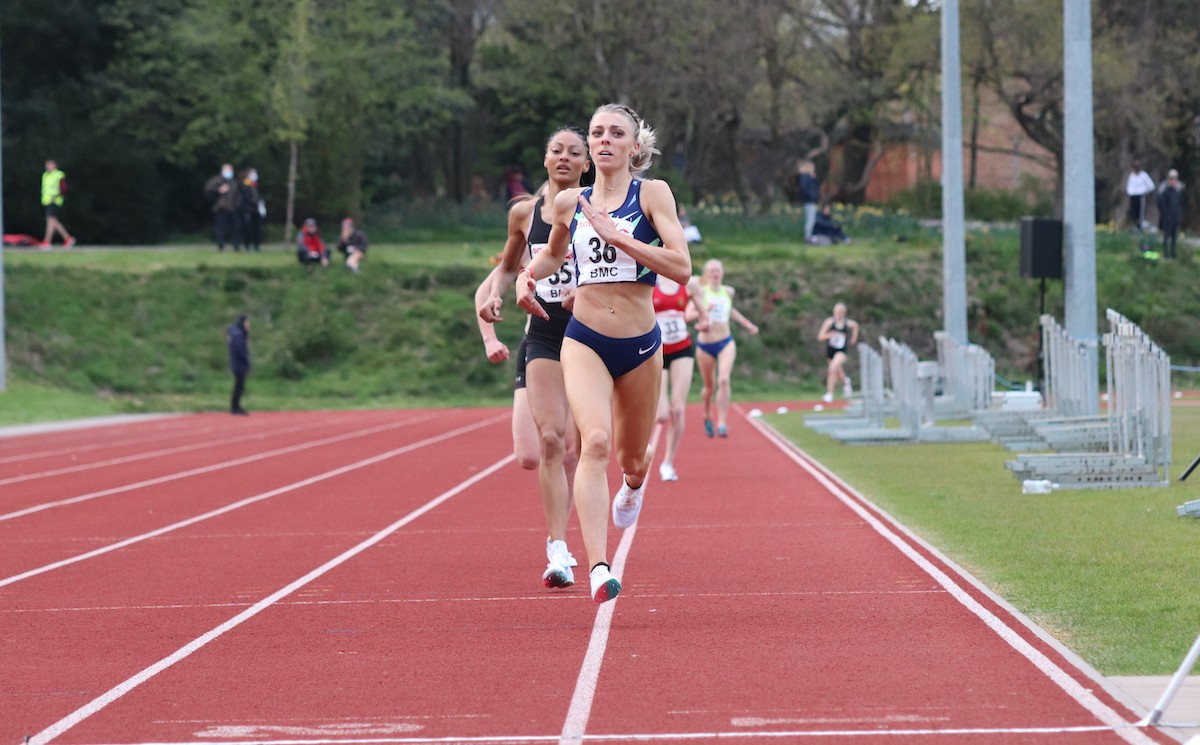 Olympic qualifiers for Charlie Da’Vall Grice, Jake Heyward and Alex Bell. Walcott-Nolan and Mortimer show great form in Europe, Jess Judd continues her buildup and, well there’s a LOT of racing to catchup up on from this week. Settle in.

The European Team Championships in Poland continue as I type but as things stand Revee Walcott-Nolan has to take the headline. She’s flying at the moment and after setting a new best over 800m recently she just upgraded her 3000m time too, taking the win in 9:13.36.

The Inaugural fixture in the Welsh 5k series took place in Pembrey Country Park this week. Over five laps Alaw Beynon-Thomas (Les Croupiers) dominated, pulling well clear of the rest of the field to win in 17:14. Donna Morris (Built & District RC) was second in 14:44 and Jasmine Cooper (Cardiff Met) third in 17:58.

In a separate race for the men Josh Griffths was back out there putting his marathon legs through more speed work. Just a week after equalling his 5k PB of 14:19 in Bristol, he grabbed victory in Pembrey with a 14:23 finish. Dan Nash (Cardiff) was hot in his his heels for second place in 14:29 and Morgan Davies (Swansea Harriers) was third in 14:35.

A win in Pembrey for @AlawBeynon with a time of 17:14 ⬇️ pic.twitter.com/1HoWNvbYgu

Earlier in the week the Welsh Endurance Meeting in Carmathen tested the same distance but on the track. Split over two races Shaun Pinch (Pontypridd) won the A-race in 16:43.06 but it was Cardiff U20 Lloyd Sheppard who rather outran his B-race, finishing over two minutes ahead of the rest of the field in 15:42.46 and therefore also the fastest time of the night.

It was his first official track race over the distance but he’s been logging some great times on the road lately – last week he was third at the Bristol Track Club elite 5k in 14:58 and this week he went on to race the above-mentioned road 5k where he placed seventh in 15:12.

BMC delivers a stackof PBs and Euro U/23 QTs

The BMC Grand Prix in Stretford was the second in the series and saw a great set of results. Jess Judd continued to show great form, running a confident 4:07.92 to win the 1500m.

Running fast under the lights

The Manchester Invitational 2021 organised by Bryggen Sports saw spectators, lights and a DJ inspiring athletes to some fantastic performances. Izzy Fry clocked a Euro u/23 standard to win the 5000m running 15:49.85 to outsprint Jenny Nesbitt who clocked 15:50.60. Fry recently joined Team NB Manchester and it already seems to be showing signs of being a great move. Mhairi MacLennan was 3rd in 16:12.12.

At the Battersea Friday Night 5k Under the Lights despite an epic day of work and travel, Nicole Taylor smashed out a PB to win in 15:53.4. A swift race, it saw Niamh Brown place second in 16:54.7 and Ruby Woolfe third in 16:55.

The men’s race was a tight won – Charlie Eastuagh fought off Charlie Brisley and Freddie Hessian in a podium with only four seconds separating the athletes who ran times of 14:17.6, 14:20.5 and 14:21.5.

In Northern Ireland, Alex Bell grabbed herself an Olympic qualifying time over 800m at the Belfast the Milers Meet. She took 1.30 seconds off her previous best to dip just under a second inside the required qualifying mark.

It is great to see Ealing Eagle’s Melissah Gibson topping the podium at the Kempton Park Marathon – it’s two and a half years since her last marathon due to a variety of setbacks, but her 2:53:20 finish here suggests that she’s well and truly on her way back. James Dazeley won the men’s race in 2:40:57.

As always, Run Through have had a slew of events on to keep us busy. Their Chase the Sun series Brixton event certainly isn’t their flattest option, but that didn’t stop  Steve Skinner from taking the win in 34:13 . Nicky Hayes was first woman in 49:07. The 5k was won by Jessie Law (20:37) and Joe Cochrane (18:34).

The Battersea Chase the Sun which took place a day later is a better setting for fast times and the results this week support that. Hazel Jackson won the women’s 10k in 37:40, the men’s winner was Alix Ramsier in 32:11. In the 5k Luke Triccas will be grateful for the chip-time as he finished in 15:59 with Polly Warrak working her way forward quickly to win on chip time in 17:51.

At the Run Media City 5k / 10k Yasmin Suleman was first woman home in 40:22 for 10k and Ian McBride topped the men’s results in 33:49. The 5k saw Jed Bartlett (alas, not running for West Wing AC) win in 16:05, obliterating the competition. Staggered starts are still the order of the day at the moment Ellen Mcloed (19:25), Alice Alcock (19:29) and Lucie Goddard (19:31) made the women’s podium a tightly fought affair, but again this wouldn’t have been quite so apparent until after the event. We can’t wait until it’s time for the old-school battle to break the tape again.

If you like going round in circles then the Lee Valley Velo Park races are the ones for you! Ryan Mitchell won the men’s half marathon in 1:13:56 and Megan MCDonalnd in 1:22:45. The 10mile event was won by Stephen Fabes in 57:23 – the only runner to go under an hour. Natasha Michael took the women’s win in 1:20:07.

Annabel Gummow (who was due to run the GB Marathon trials earlier this year but had to pull out) outclassed everyone else in the 10k, finishing first overall in a time of 34:52 and beating Alex Hardy who was first male in 35:32. Over 5k it was Rhys Rowlands and Emma Clements who were first in 16:57 and 22:07 respectively.

The Richmond Park Half Marathon was the scene of a near ten-minute victory for Ollie Garrod thanks to his 1:12:03 time and Ania Gabb also had a good margin when she finished in 1:25:35 to win for the women.

Meanwhile, in the States…

Finally (and slightly randomly) there was a marathon competition going on too, at which Liam Barnsby (Inverness U23) decided to make his marathon debut and finished 15th in 3:03:30.

Charlie Da’Vall Grice ran a season’s best, but more crucially an Olympic qualifier, over 1500m at the Portland Track Festival to take silver in 3:33:81. Jake Heyward will also be delighted with his PB and Olympic Qualifying performance of 3:33.99 which gained him bronze.

The Boston Marathon and Half Marathon takes place in Lincolnshire on Bank Holiday Monday. It’s one of the flatest courses available in the UK and bound to attract some fast times, so watch this space for updates after the event.

Next Saturday is the GB 10000m Olympic Trials in Birmingham. It won’t have the crowds or the spectacle of the Night of 10000m PB’s but it’s certainly going to be a great race to watch. We’ll be covering it in full here.