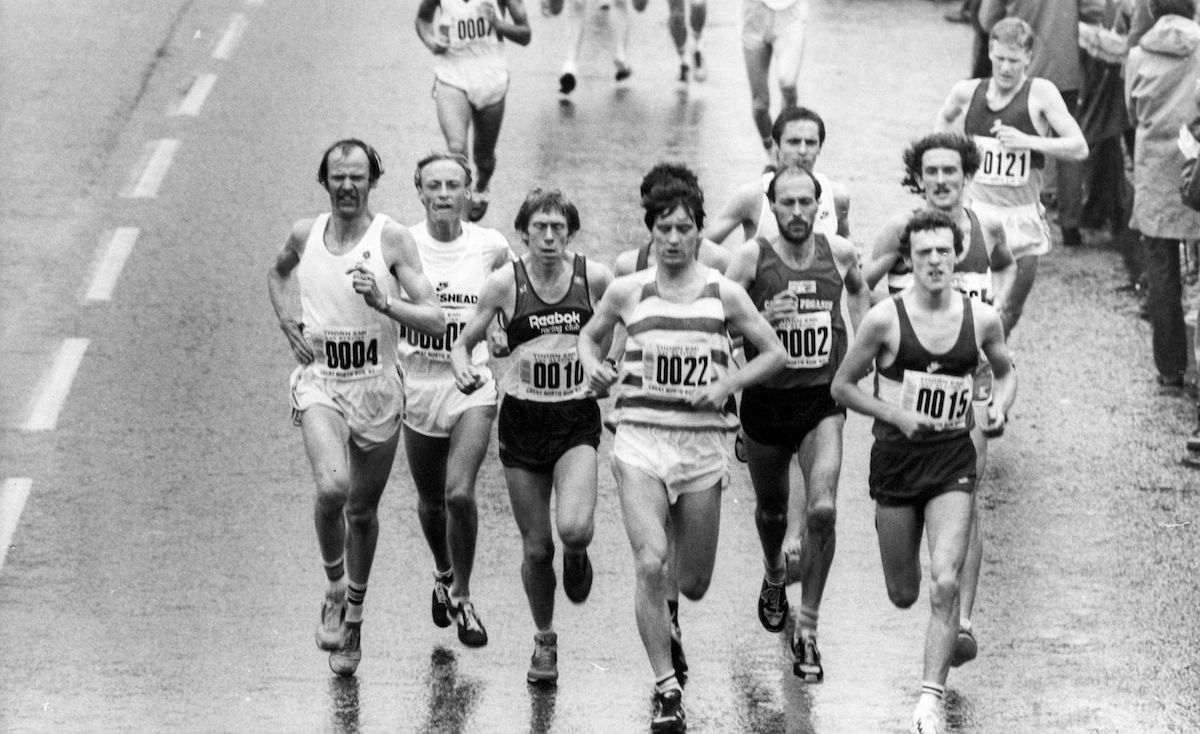 Its 28th June 1981 and charging towards the finishing line is a native of the North East who is about to head a 12,000 strong field and be crowned inaugural winner of the Great North run.

Wearing no.11 and clad in all red vest and shorts, he gently brushes away an all too close BBC cameraman as he is shepherded from the road to the comfort of the grass as he turns right to stop the clock at 63:23- it’s a feat he will go on to repeat a year later.

Olympic silver medallist Mike Mcleod is arguably one of the most underrated British distance runners and that can in part be explained by the fact that he ran in an era where British middle distance stars dominated at the major championships – his silver would never shine as brightly as Coe’s gold at those very Los Angeles Olympics.

To put Mike’s 1984 Olympic 10,000m success into perspective, its worth reinforcing the fact that it would be some 27 years before a British male athlete would win a medal on a global scale over the 5,000m or 10,000m.

Of course, the next man to do so was a certain Sir Mo Farah, when taking silver in the 10,000m World Championships in Daegu in 2011. ‘Sir Mo’ would go one step further in the 5000m at those same championships, claiming his first ever Gold medal on the global stage. This was the start of what would be an astonishing track career for Farah, which catapulted him into his status as sporting megastar.

‘Racing brains’ and ‘tactical prowess’, are sentiments which could apply equally both to Farah and his forerunner McLeod, as they were and are two men each with a unique ability to win races. Mike candidly explains that, “For me it was always about who crossed the line first. That’s all that mattered”.

In a generation when time trials have become a frequent spectacle, especially on the lucrative Diamond League circuit, some hard core track and field enthusiasts inevitably feel that the sport is missing a real piece of what McLeod and Farah could undisputedly do so well- namely race!

Growing up in the North East of England and with a strong working-class normative orientation to the work ethic, it’s obvious McLeod never had it easy. He readily acknowledges that, “we had to work for everything, but that’s what made us”.

He believes this mindset is what set him up for tough winters where he fondly recalls, “the Gateshead track being covered in snow”. Even when the track was shut, McLeod would willingly jump the fence, lace up his trusted spikes for extra grip and tough out some half mile reps.

These sessions tended to be run entirely to feel with the stopwatch being put away till the light nights of the Spring. “We had to get used to bad conditions in the North East”, he recalls as if it were yesterday. “Sometimes when it was blowing a gale, we could change the session of 400m reps to 200m reps.

This would become a Fartlek, with 200m hard and 200m floating recovery. We never let the conditions stop us training, but we did have to adapt”.

Those gruelling winter sessions were often set by Alan Storey, who was coaching him at the time. McLeod is adamant that he benefitted from the endurance-based approach that Storey adopted.

Mike stresses a very methodical yet bespoke approach to his training. He warns that, “You can coach 10 people and easily put them in the same session, but everyone is different. For that reason, they might have a different purpose within that session, or the session might be slightly different for one athlete to another”.

He continues “To start the winter, it was about conditioning and running within yourself. We would not race each other. We trained as a big group and we had some great lads in the group, but we all helped each other out”.

The subcultural appeal of group training clearly benefited him in being able to link in with other emerging North East stars including the likes of Steve Cram. He continues that, “Alan was always open to other people joining in to help out and Steve was great to train with. He was much stronger than people gave him credit for. The 5 mile or 10 mile handicaps we used to do got quite competitive, especially in the spring before the track season, as we used these sessions to see where we were, almost like a test”.

Mike recounts how Storey clearly liked to vary the type of training, with short hill sprints, fartleks and tempo runs all being part of the periodised schedule. He feels strongly that this helped give him the tools to potentially win any type of race.

He explains that, “You just didn’t know what was going to happen in races in the 70’s & 80’s. The plan you had, or the one I had planned out with Alan may go out of the window in the first 400m. If this was the case you had to adapt, but ultimately you had to be prepared for anything”.

Preparing for every eventuality is nigh on impossible, however the variance of training provided by Storey which targeted the different energy systems on a regular basis meant that in Mcleod he had a very well rounded athlete who could compete over a range of endurance based distances.

As evidence of this, in later years during a Vo2max test, physiologists would reveal to him that he may have been in fact more suited to the mile. Mike himself attributes this potential for speed and power to the hill work he used to complete, where he would be forced to drive his knees high and hold good biomechanical form on tired legs and in addition he flags the gym bases conditioning work that Storey would also insist on.

He clarifies that, “A lot of people had different views on gym work back then, but I followed Alan’s advice. I used to do a lot of reps and low weight, more for conditioning”. It’s fair to say that athletes enjoy the benefits of a more scientific and evidence based approach to strength & conditioning work but Storey was perhaps ahead of his time in never seeming to leave any stone unturned, which again could be an argument to why his athletes were very robust and always prepared.

What should not be overlooked is that McLeod’s consistency was almost unprecedented, and this is highlighted by his 17 straight wins at the Saltwell Road Race.

Remember that it wasn’t easy to win any race in the North East back in the 70’s & 80’s and this kind of streak is an unbelievable achievement. This isn’t the achievement he will be remembered for though, for that would come in LA in 1984.

A relative underdog, McLeod would again surprise the athletics world, if not himself, by picking up a Bronze medal, which would later be upgraded to Silver. With the benefit of 36 years of hindsight he remembers that, “I knew I was in good shape, maybe World Record shape, but I also knew that I couldn’t go with them guys. Something just wasn’t right”

His darkest suspicions were later shockingly confirmed when second placed finisher Martti Vainio, of Finland, tested positive for a banned substance. Mike was immediately upgraded to 2nd but degradingly would only receive his medal in the post.

There is still controversy to this very day over that result, not just because of Vainio’s positive test as Alberto Cova, the Italian who took Gold that day, would later admit to using blood transfusions, which are now known to give athletes a clear advantage.

It’s fair to say we could be chatting to an Olympic champion rather than a Silver medallist and perhaps the shortfall in terms of financial benefits and endorsements missed due to this, is not something Mike chooses to dwell on.

If Mcleod’s achievements go under the radar a little it is also testament to a modest and humble man who doesn’t feel the need to shout about them from the rooftops. The quiet and very funny family man is a living legend in the North East and that’s what matters to him.

Stories are still told about ‘Mick the Kick’ and how, “you could not win a race against the great Mick Mcleod”. Mike signs off with a smile and quietly says, “as long as this interview helps at least one youngster or coach in the sport, I will be happy”. In a nutshell that’s Mike McLeod for you- there may be an Olympic silver shadow but he’s pure Geordie gold.

Matt Long is a former winner of the British Milers’ Club Horwill Award for Coach Education Research and author of more than 260 coaching articles. Lewis Moses is a former World Championship athlete and British indoor 1500m champion and founder of New Levels Coaching. He has tutored and mentored a host of Team GB junior athletes. Both authors welcome contact for further advice on this piece at newlevelscoaching.co.uk and mattlongcoach@gmail.com

The marmite session
And the fell winner is…