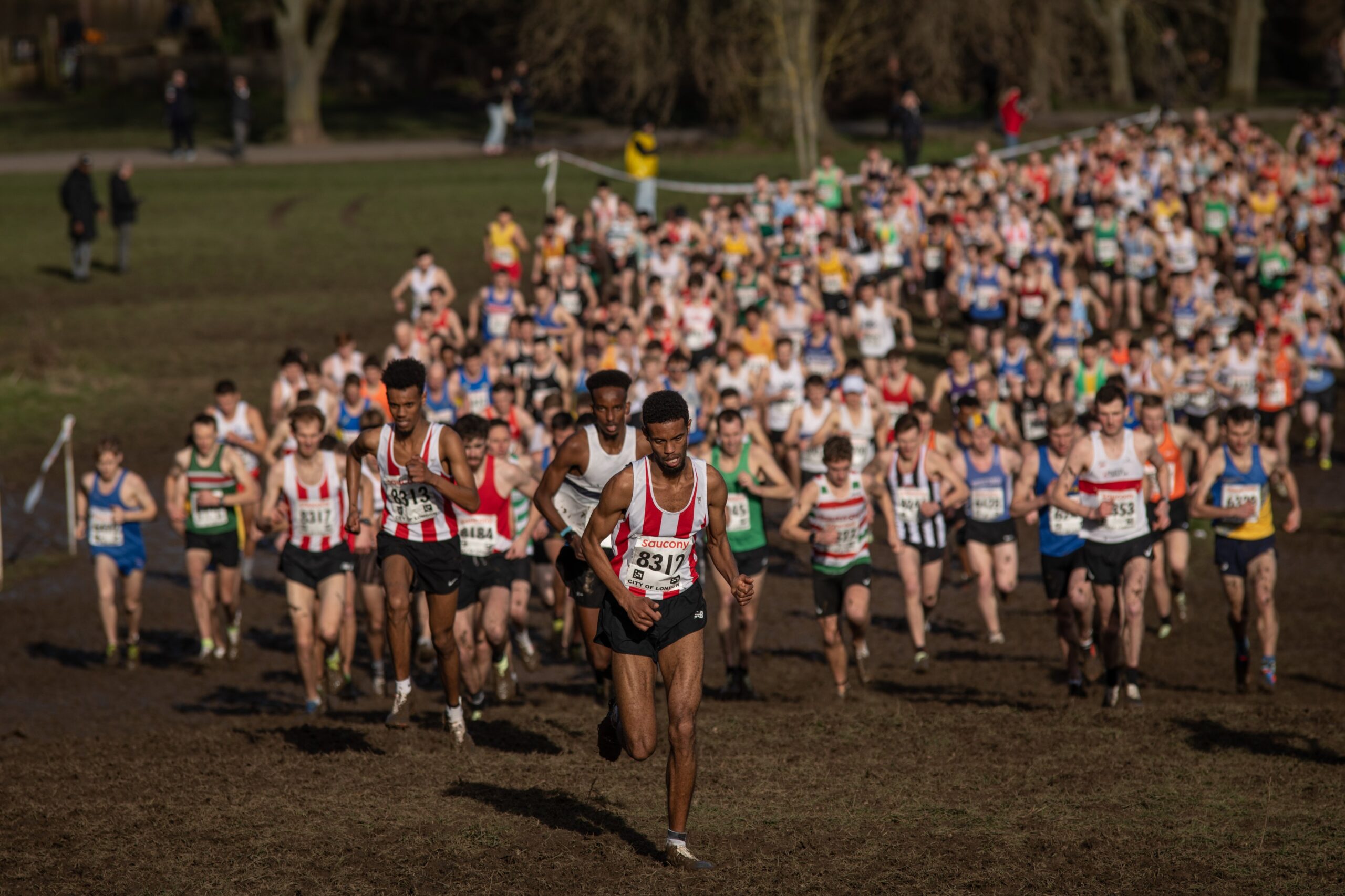 A late addition to the round up, but deserving top spot is a stunning performance from Josh Kerr to break the British indoor Mile record with a stunning 3:48.87 – the third fastest indoor time in history. Not only did Kerr break Peter Elliot’s long standing mile record but also ran inside the British indoor 1500m record with a 1500m split of 3:32.85.

Parliament Hill and Falkirk played host to the English and Scottish XC Championships, with an ideal combination of clear cold days and a lot of mud underfoot.

As Scottish Athletics noted, there “was a strong sense of déjà vu around the podium when the medals were presented” at the Lindsay’s Scottish National Championships. Mhairi Maclennan won the senior womens’ race for the third time, having recently returned to her youth coach Ross Cairns. Silver went to GB international hill runner Scout Adkin and bronze to Morag Millar of Central AC .Edinburgh Uni Hare and Hounds won the Senior Women’s team race.

Jamie Crowe, who was first senior man,has topped the podium once before in 2020 but this one will have been particularly sweet after recent battles with injury and Covid. Not only that but Crowe’s run contributed to Central’s record of 11 successive team golds. Individually, the silver went to Ross Gollan of Shettleston taking silver at 32.44 and Andy Douglas of Inverclyde took the bronze. Full results here.

The iconic charge up the starting incline at Parliament Hill felt particularly powerful this year as the ECCA Saucony English National Championships returned to a boggy Hampstead heath after the all-too-familiar Covid break. Mahamed Mahamed showed his class once again with a confident victory in 40:52, holding off Emile Cairess who clocked 41:07 and Alex Yee with 42:04. The top 25 men all ran 44 minutes or under for the 12k course.

Yee wasn’t the only Olympic triathlete out on the course, as Georgia Taylor-Brown took on Southern champion Jess Gibbon from the start in the women’s race. However, by the second loop it was Gibbon and Northern champ Eleanor Bolton who were up front.

Finishing a perfectly judged race, Gibbon crossed the line in 29:00 to take the win for Reading AC. Eleanor Bolton (29:08) was next over the line and Leeds City’s Bronwen Owen made it her second bronze in a row, finishing in 29:23. Taylor-Brown was fourth in 29:43. Full results here. Team results are pending verification. Pembrey Country Park was the setting for the Welsh National XC Championships and had by far the firmest and windiest conditions of the National events happening that day. The Senior Women’s race was won by Lauren Cooper of Parc Bryn Bach Runners in a time of 27:37. Caryl Jones of Swansea Harriers took the silver medal and Chloe Dooley of Pontypridd Roadents the bronze. Swansea were the women’s team winners. Reigning champion James Hunt held onto his title despite clubmate Dan Nash’s best efforts. Triathlete Adam Bowden was the last man on the podium taking bronze for Bridgend AC. With a top two, it was no surprise that Cardiff won the men’s team trophy.

You can read full report on the race from Alex Donald here.

Kelly Hodgkinson made her debut over 400m winning her heat and semi final to progress to Sunday’s final. There are plenty of results to still come in from today’s action but so far we have seen Elliot Giles take the 800m title in 1:47.99 from Guy Learmonth (1:48.58) with Ben Greenwood claiming bronze with 1:49.13.

Running through the week

With the big ticket events dealt with, it’s time to take a tour through the week and around the country to look at all the other events which have happened over the past seven days.

Kicking the running week off on Tuesday in Torun at the World Athletics Indoor Tour, Elliot Giles whet our appetite for the end-of-week indoors by winning the 800 meters in     1:45.42

On Wednesday night the Even Splits Leeds 5k finished in a dead heat for first place as Pierre Devimeux and George Ravenhall of North Leeds Fell Runners both ran 15:48. In third was Matthew Chipping (Valley Striders) with a time of 15:56.

Neither of January’s winners were in action at the Serpentine Last Friday of the Month 5K, leaving the coast clear for Ollie Garrod (South London Harriers) to take the men’s crown in 15:27 and Julia Wedmore (Herne Hill Harriers) the women’s in 18:20. Sage Pearce-Higgins was second man in 16:09 and Stuart Farmer third in 16:13. Alex Cross (19:02) and Emerie Sheridan (19:41) completed the women’s podium

The results of Glasgow’s 3K on the Green are pending but will be published here.

Onwards to the weekend and for those who weren’t in Birmingham or hurtling round Parliament Hill and Falkirk in the mud, there were still plenty of chances to get a race on.

After setting a Half Marathon PB in Granollers in February, Naomi Mitchell was ready for another upgrade and did so convincingly at Wokingham Half Marathon, taking another one minute twenty off to win in 71:53. Becky Briggs was runner up in 73:51 and Kirsteen Welch took nearly three minutes off her previous best, finishing third in 74:42. Josh Grace led from early in the race to take the win in a solo run off 66:06 with Tom Merson finishing 2nd in 67:05 after fulling in fellow South West athlete Ronnie Richmond. The podium was completed by Nick Torry in 67:23. Josh’s training partner Ross Skelton raced back along the seaside to break the tape in 67:48 at the Brighton Half Marathon. 68:18 earned Marshall Smith a silver spot and local boy Simon Heath went home with bronze in 68:58.

Charlotte Regan led the charge for the women, taking her crown in 79:16, followed up by Rachel Gifford ten seconds later and Emma Navesy in 79:46 in what looked a very competitive race.

Further afield, the 10K BP Castellón will mainly be hitting the headlines for Yalemzerf Yehualaw breaking the world record to win in 29:14 , clocking a 14:28 5k en route – the second fastest in the world. However, we shall not let it go unnoticed that Rebecca Brassington was also out on the course and ran 37:19. In Italy, FastRunning’s Robbie Britton ran a brilliant half marathon PB of 69:27 to place sixth at Trecante Half Marathon.

At Carsington Water William Hunter won the 10k race with a fine margin and a time of 36:40. Charlotte Buck was first woman across the line in 43:25. Over the half marathon distance, Andy Harding was a good two minutes out front, taking victory in 1:13:44. Katherine Lau earned her gold spot in 1:32:23. 150miles or so south, the Pontypool 10k was won by Alice Murray-Gourlay in 36:15 and Matthew Brunnock in 33:45.

In the Midlands the RunThrough Leicestershire Half Marathon benefitted from beautiful sunshine and relatively still conditions at the start of the race. Gemma Hillier-Moses made the most of it, running 75:55 for a clear win and a huge PB of over two minutes. Justine Anthony was next over the line in 79:56 and Raquel Garcia-Cabrera followed up in 82:33.

The men’s race was a bit of a tighter podium but Jason Bennet managed to keep nine seconds ahead, running 71:29 to beat Daniel Lloyd’s 71:38. Mark Hill was third in 72:10. Elsewhere in Leicestershire, the first of the Leicester Road Running League races took places, setting up rivalries for the year to come. Results for the Stilton 7 will be posted here later today.