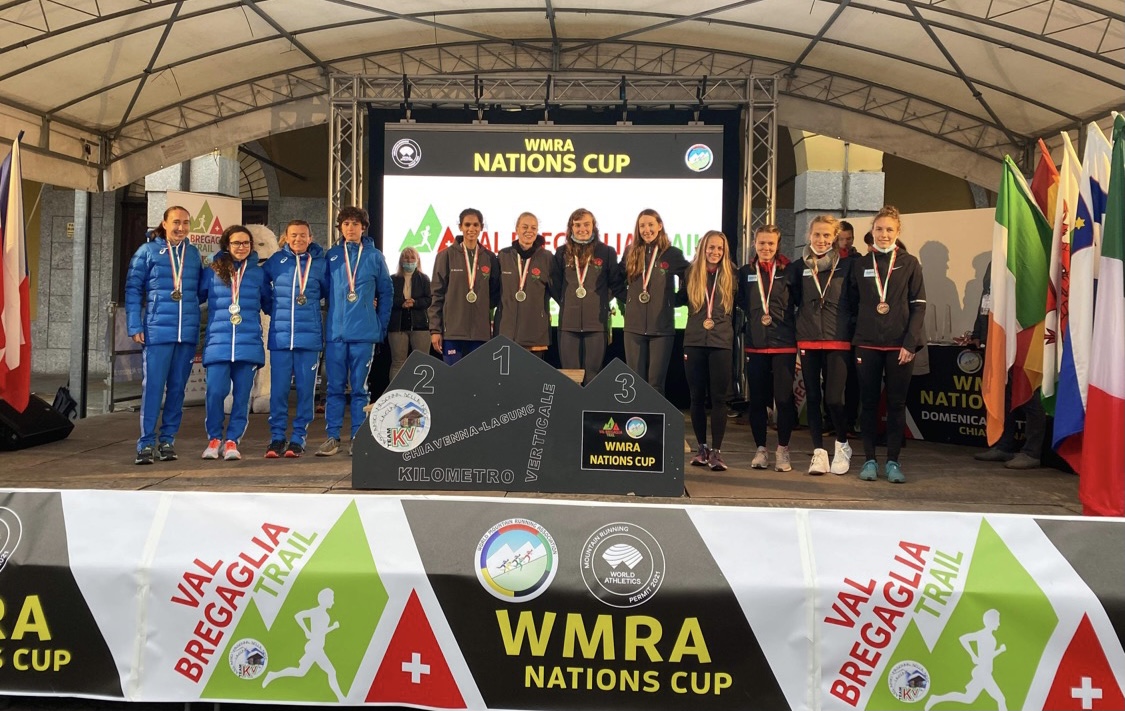 Gill Bland brings you this weekends action from the roads, cross country and mountains

The Val Bregaglia Trail Half hosted the World Mountain Association Nations Cup. The race saw Scotland’s Scout Adkin run a storming 1:35:47 for silver, just edged out by Italy’s Francesca Ghelfi who won in 1:34:01. The men’s race was won by Filimon Abraham of Germany in 1:18:29 and England took the Silver in team race after Chris Richards ran an excellent 1:22:46 for fifth place, Max Nicholls took tenth in 1:24:15 and Billy Cartwright 13th in 1:25:51. Eve Pannone was second and Finty Royle third in the under 23s race.

In Switzerland, Jasper McDowell ran a PB of 2:34:13 at the SwissCity Marathon to finish eighth.

Torrential rain in the Midlands made for conditions more akin to cross country, with flooded roads and wind hampering runners in Leicester and Coventry. Nonetheless, Mo Hussein threw down a 1:10:38 to win the Run Leicester Half Marathon,  with Ben Di Salvo (1:12:25) and Jason Baker (1:12:58) in his wake (perhaps literally).

Rebecca Randell was a clear winner of the women’s race in 1:22:48 with Leicester Road Running League legend Charlie Nurse second in 1:29:29 and Emily Hall third in 1:30:22. In the domestic XC champs many leagues were in action this weekend. Gloucestershire League took place at Cirencester Park and saw Dominic James of Western Tempo break the tape in 35:59. Clubmate Ben Price was right behind him in 36:08 – a big part of the reason that Western Tempo topped the team rankings on the day. Adam Stokes of Bristol & West was third in 37:14.

Julie Emmerson of Uni of Bath was first over the line for the women, running 27:31. Kiya Dee of Cheltenham & County Harriers second in 27:58 and Phoebe Hayashi also of Uni Of Bath, third in 28:13, meaning they took the team win in the Senior Ladies competition. Thanks to everyone who sent us the link to the results – you win most engaged XC league by a country mile!

The North Staffordshire League round three took place at Park Hall Country Park. Lee Gratton of Rugeley Runners managed to hold off a Stoke clean sweep by winning in 23:03, but silver and broke spots went to the potteries as Jamie Arnold took second in 23:45 and Jordan Thomas third in 24:01.

There was success for them in the women’s race too as Donna Sherwin of City of Stoke AC topped the podium in 21:45, but it was Newcastle (Staffs) AC who held the next two spots thanks for Rebecca Twardochleb (21:50) and Sophie Goodfellow (22:16).

Finally, in the results that we have so far, the West Yorkshire League in Leeds saw York Knavesmire Harriers top the women’s team rankings and Jemima Elgood (Ilkley) fastest overall in 19:39. Behind her were Almi Nerurkar of SkyRac(?) in 19:56 and Knavesmire’s Helen Crossin 20:14.

Sam Dickinson was first Senior Male in 31:12 for City of York, followed by Joe Sagar (Spenborough) in 31:46 and Joseph O’Brien also of City of York in 31:55. His team also came home first overall.

Please do tweet us  or me (@gillbla) your league’s results if you’re competing as it’s the best way to make sure they are included.

There were a host of NCAA XC races taking place over the pond and many Brits taking part, but the most noticeable of the results were:  American Athletic Conference in Lakeland FL, USA where Scott Beattie (Morpeth / Tulsa University) was home first in 23:50 over the 8k men’s race and the PAC-12 Championships in Salt Lake City UT which saw Charlie Hicks (Shaftesbury Barnet/Stanford Uni) also take victory in 23:35.

Meanwhile, Alice Wright took on the UK National track one hour record in Phoenix. Wright trains with Hoka and after a few years struggling with injury and a few DNS’s she looks to be finding some form and will be making her marathon debut in Valencia on the 5th December.

This was designed to be a fun way to test her out and get a bit of publicity at the same time. The previous marker was a 21 year old distance of 16,495 held by Michaela McCallum. Wright easily hit the target, covering 17,044m.

Back to the roads

At the RunThrough Newbury Racecourse Half Marathon / 10K / 5K the 5k was won by Amelia Drew in 22:49 and William Trew of Swindon Harriers in 17:02

In the Half Marathon it was a close affair in the men’s race, as Richard Davidson’s 83:48 win was just four seconds ahead of John Austen. In the women’s race Carla Stokes was well clear of her nearest rival with her finish time of 1:38:06. The Wimbledon Common Half  was won by Adam Ridler in 1:22:34 and Francesca Smith in 1:29:18.

In Leeds and the Even Splits 5K at the Cyclopark Jack Kelly (16:21) and Angela Hall (20:07) won the sixth race in the series. That leaves Hall top lady overall at the moment with two left in the series. Martin Fillingham was third in 17:05 on the day but currently leads the overall standings.

Llanelli Half Marathon hosted the Welsh Half Marathon Championships in dreadful conditions. Demi Griffiths took the men’s win in a time of 69:14, well clear of Andrew Horsfall-Turner (74:11) and Sam Humphrey (75:02). Sioned Howells took the women’s title in 80:28 with Donna Morris (81:15) and Carys Hughes (82:50) joining her on the podium.

“The greater the storm, the brighter the rainbow!”

Delighted to retain my Llanelli half marathon title and add another welsh title to the collection. Thanks to all the volunteers who braved the weather today and the team behind @frontrunnerevents for making it happen. pic.twitter.com/wfQ0JXuJNf

And finally, the Sri Chinmoy 3100 had 5 finishers this year. The race took place from September 5 and is the world’s longest certified road race, running 6 am to midnight for 52 days. There were 7 runners in total including one woman.