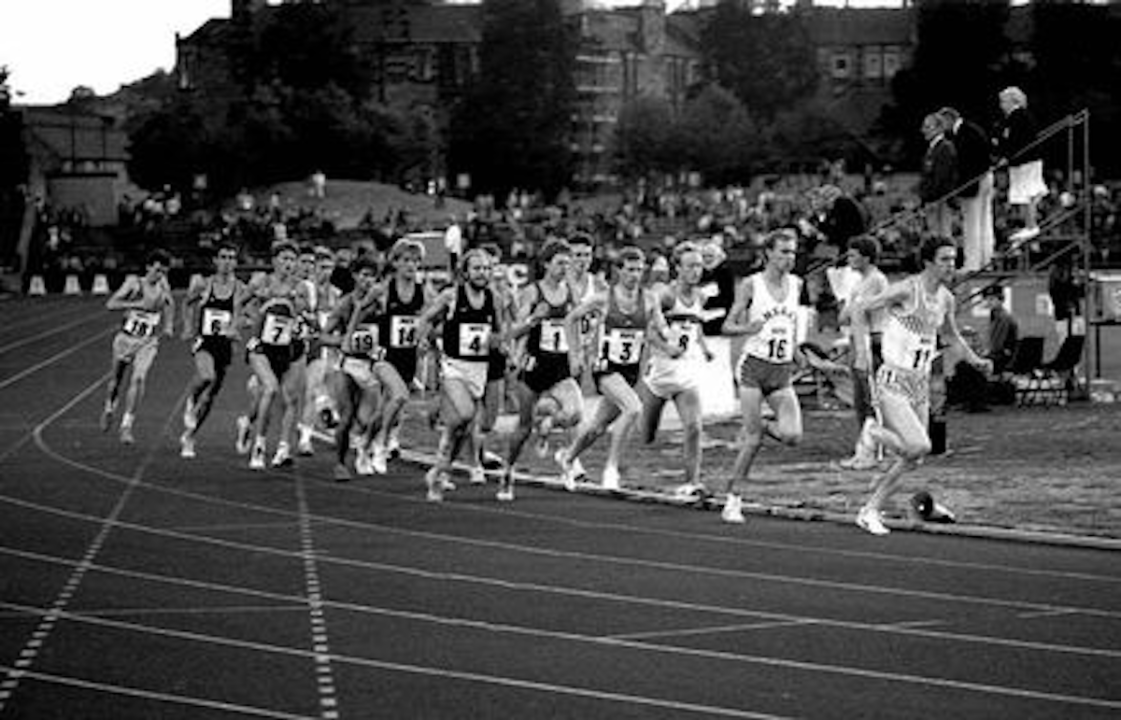 Mike Deegan tells it as it is to Matt Long

The dictionary definition of a ‘raconteur’ is someone who tells anecdotes in an interesting way. Matt Long digs a little deeper to find a story teller, who was also an international athlete and who continues to be a successful businessman in our sport. With over five decades in our sport, Mike Deegan is a story teller worth listening to.

Matt Long: Let’s start with your own illustrious career. Pick out one or two highlights for us?

Mike Deegan: As you get older and reflect, you can recall good races. I guess winning the Northern XC as a youth in 1973, placing 5th in the National Juniors 1975 behind Steve Ovett and then a decade later finishing 5th National senior race in 1985. The ironic thing was I didn’t have a passport back in 1975, so I panicked for 3 weeks, as I was in Birmingham at University. 10 years later my passport had expired so clearly I didn’t expect to make World Cross team either time.

Fonder memories are regular trips to France for XC and road races with my wife Angela before we had kids. I was lucky enough to have many trips with the Ron Hill Race Team to the Paris 20km, a few memorable races in Geneva, and a business trip with Ron taking in Hong Kong Half Marathon and Bangkok 10km a week apart in 1989. I won both!

As a student I have great memories of racing and training at Birmingham University (1974-77) with the likes of Ray Smedley, Mike Kearns, Ian Gilmour, Mike Longthorn, Roger Hackney amongst others. I was proud to captain Lancashire, winning many inter counties titles in the 1980s, and played a part in helping Salford Harriers win numerous team titles through the 1980s.

ML: Given your longevity in our sport, what changes have you witnessed over the decades?

MD: As a young teenager I was inspired by Ron Hill, Dave Bedford and later Brendan Foster. Running in the 1970s was all about being in a running or athletics club. It was probably a combination of the Ovett/Coe rivalry, BBC TV and the London Marathon and Great North Run coverage changed that in the 1980s. It seemed that everybody suddenly wanted to do a marathon and there were quickly races in every town and city.

Looking back we had a great depth in club running were 14 minutes for 5000m might just rank you in GB top 50. I mean finishing in the top 50 in the National XC was a big deal.

This buoyant club scene was joined lots of beginners and the charity driven runners had arrived. Race for Life events arrived, and more women joined the boom. This has continued over the past 30 years with couch to 5km programmes and parkrun. So now we have more people than ever running, but a sadly a decline in numbers in athletics clubs. You seem to have a declining competitive pyramid at the top, more races and less quality. It’s more about participation than PBs.

The sport has also changed with central funding and a professional governing body. For me, national funding driven by medal success rather than athlete development. The sport faced many challenges pre COVID, and will face considerably more post the pandemic.

The way forward is we somehow need to harness the participation numbers to help fund elite sport which is now so dependent on Nike, TV revenues and Government/Lottery monies. Mike and his wife, Angela, after both won Munich 10km..winning 2 bikes!

ML: Many in our sport understandably associate you with Ron Hill. Tell us about your friendship and working relationship with the great man?

MD: I first met Ron in January 1978 for a 5 mile run and an interview. I started work doing accounts for him on February 14th and was late because of snow and having to catch 3 buses. I soon got into running to and from work, 8 miles each way! Ron and I shared a small office above his shop in Hyde. As the first importer of Nike into UK and Europe, Ron was developing freedom shorts, mesh vests and tracksters.

With the running boom upon us we started wholesaling, and eventually had 6 stores as well as customers throughout the UK. The business grew from £200k to £6million from 1979 to 1989. I was managing director from 1980-1995. We hired runners who were graduates, then some who weren’t, and had a great Ron Hill Race Team travelling around Europe running road and xc races. Ron would describe the business as a hobby that got out of hand!

From a personal perspective, my dad died unexpectedly in July 1978 and Ron became a bit of a father figure to me, encouraged my running and we had great fun building a business together. We became good friends, and spent many New Years Eves together.

I have seen Ron and his wife May about half a dozen times in this past 18 months. Its well known he is sadly suffering Alzheimers, but he still knows me and it was great to catch up with him and many ex colleagues in January, when he received the freedom of Tameside. The business has be bought and sold a few times, but it celebrated 50 years on 9th September. I retired in 2013 and moved to Yorkshire, so don’t see Ron as much as I would like. ML: So tell us about the Yorkshire runner shop because you’ve found a way to celebrate Ron Hill’s legacy I believe?

MD: Yorkshire Runner started 5 years ago. I had some money from down-sizing, and some ex employees in Tim Agar and Steve Brooks wanted to open a running store- hence Yorkshire Runner was born. We apply the same principles as we did back in the 80s. Immerse yourself in local running and races, get involved, become the running hub with a great reputation for product and service at great prices.

The business had been growing steadily, until Tim suddenly died of a heart attack in August 2019. I was ready to close or sell as Tim was the main man day to day, and my passion wasn’t in it anymore.

Fortunately, Dave Norman became available in November 2019 and we are growing again. Steve Brooks has finished with the Altra brand, and has built an online/printing business during lockdown. We have been doing home drop offs and one to one gait analysis, and are now in a very strong place. Over the next 2 years I hope to transfer my shares to Dave, so that the team can take this business forward together.

The Ron Hill t shirt idea came from 2020 being the 50th anniversary of Ron wins in Boston and Edinburgh at the marathon, and also the 50th anniversary of the company. I had to get permission from Ron’s family and the Ronhill brand, so we agreed to do 3 limited edition t shirts. A great way to remind everyone what an innovator Ron was in so many areas of running. ML: How do you view the future of our sport?

MD: There is lots of talent coming through in middle distance but that talent is not always making it through to senior levels. As I’ve said previously, the elite sport is funding and medals driven. At grassroots level it’s about volunteers with fewer athletes and less meaningful events, area leagues and so on with Health and Safety barriers.

Looking back at the 80s the success of Ovett, Coe, Cram, Peter Elliott and Daley Thompson shows success can be achieved ‘outside ‘the system with one coach for life and relatively little funding. I wonder what may happen to the likes of Max Burgin, for example, if he leaves home for a university hub, and maybe a new national coach and so on. Does that need to happen? Or do we have follow the cycling/rowing model?

In my opinion we need to support young talent through championship experiences, maybe thinking more about finalists than medalists. We should look back to the Moscow Olympics in 1980 when the likes of Ovett and Coe would have to run 6 world class races in just over a week and ask how do we achieve that again. Money needs to get further down the sport, beyond the already established stars who don’t really need it. Supported athletes need to compete in National Champs both for the sake of sponsors, TV and eventually spectators. The pandemic is a massive worry. Everyone needs a plan B, governing bodies are in difficult financial predicaments which will worsen post Covid. Emerging talent should look to local businesses to support them. Remember Ron Hill set up the British Marathon Squad in the late 70s and free British meat was part of the deal!! Independent training groups working together for young athletes benefit would help.

We need young entrepreneurs helping local talent. We should remember the likes of Eddie Kulakundis (the husband Susan Hampshire) who helped athletes in the 1980s and 90s. There needs to be an informal ad hoc local safety net for future athletes, because we have no idea where athletics and our sport generally sits in the list of priorities for Government over the next 10-20 years.

Matt Long is a Midland Masters Men’s Team Manager and an England Athletics Coach Education Tutor. He welcomes contact to discuss these ideas further at mattlongcoach@gmail.com