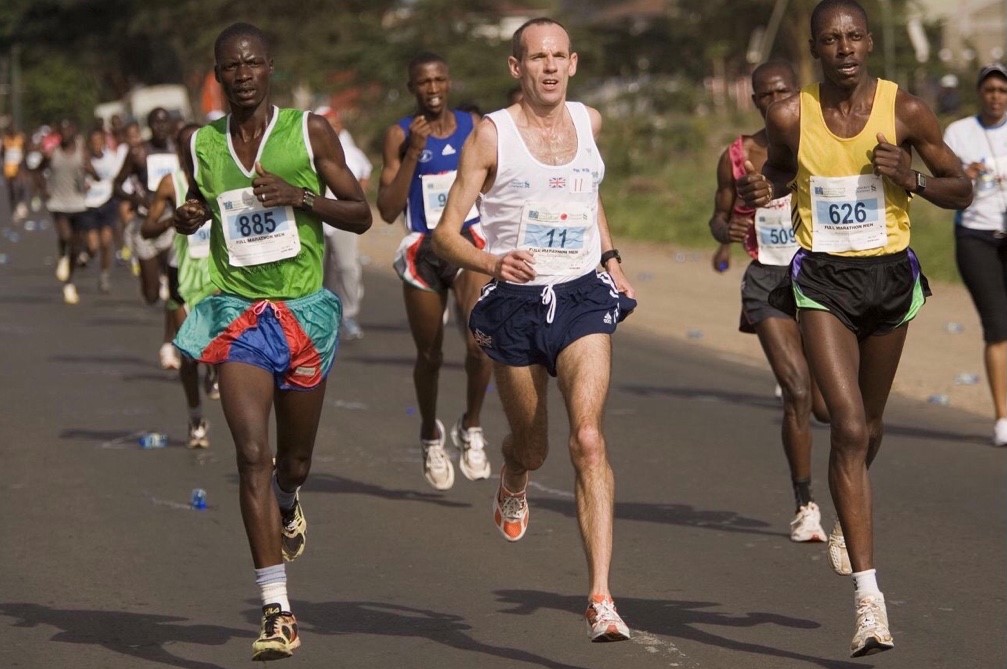 The actress Billie Burke, perhaps most famous for appearing in the iconic Wizard Of Oz, once quipped. “Age is something that doesn’t matter… unless you are a cheese!.” Like a mature cheddar, Darran Bilton’s career has tasted better with age and we unpick it in bite sized chunks.

The man who would go on to become a six time age category winner of the London marathon started with fledgling career in earnest with the City of Hull at the age of 12. With a laugh he recalls, “I wasn’t really ‘sporty’ at all. I was never a big fan of PE. In my day it was seen as a form of punishment and given a choice, I’d have rather not had PE on my curriculum!

Being a ‘PE-phobe,’ I got told to do the Hull and District junior 1500m as a kid and came 4th in the race. Even though I was way behind the winner it was my ‘Eureka’ moment in terms of how sport could be a tangible benefit in my life. I found the race effortless and also got called up on stage in school assembly to receive a merit badge it front of all my mates. I was dead chuffed that day and wondered where I’d have finished in the race if I’d have trained for it”.

If PE was framed in disciplinarian terms, the flip side is that he credits senior high school PE teacher Stuart Sherman for encouraging him into a club based environment, it being no surprise as Sherman was himself a national hurdles coach.

From this point, Hull’s Costello stadium became a focal point and Darran got to train with a young Sebastian Coe with the future double Olympic champion regularly making the journey from Sheffield with his coach and father, Peter.

Darran learned the basics of warming up, cooling down, stretching and adding variety to training (basics which have served him well) and as a junior ran Internationally on track.

After a relatively short period of desistance to focus on his A levels, HE returned to the sport in his twenties. In total he boasts a Training age 40 years plus. There are shades of the great Ron Hill as he proudly slips into the conversation that, “I have logged over 100,000 miles in my lifetime!”

Darran was in his thirties when he decided to take on the marathon, finishing 4th in the 1997 Manchester marathon in 2.31.07 and then in the following year ran 2.21.33 in he first of many London marathons. His best London result was being placed a fine 3rd Brit on the 2003 London marathon (at the age of 38).

Despite his aversion to sport as part of the formalised school curriculum, he has always led an active lifestyle- “My parents bought me a Raleigh Chopper when I was 12 years old”, he says, before continuing that, “The first day I bought it I cycled a 70 mile round trip to York and back. This seemed a pretty normal thing to do at the time!”.

As a non weight bearing activity, cycling would have given the young Darran tremendous aerobic gains which would have a transferable value later in his endurance running and marathon specific career. He didn’t realise at the time that cycling 6 miles to the track on his heavy bike, running a quality session then cycling back home would lay the foundations for an endurance career, seemingly without a major hitch.

With regard to developing those all important ABCs of Agility, Balance and Co-ordination, Darren regularly twisted and turned as a roller skater from a very young age. This is something of course that the famous Ingebrigtsen brothers notably did as a variation to cross country skiing in an underground car park beneath their Norwegian home.

In gaining Team GB representative honours as a senior for the marathon in Hong Kong, Nairobi and Toronto it’s perhaps no surprise that Darran is drawn towards the philosophy of the late, great Arthur Lydiard, who was an advocate of course of having a well developed foundational aerobic base.

He enthuses that, “Lydiard is the guru or running. If ever you are walking by an old charity book shop, have a look to see if they’ve got Running With Lydiard in there, as it’s the best £2.50 you will ever spend in your life”.

For most of Darran’s career he says he has run to ‘feel’ rather than stopwatch, with 70% or more of his work being undertaken at ‘very easy’ effort. Perceived exertion has been proved to be a useful training tool that runners up to International level often employ.

The man who has been coached by Dr Ian Boardley of the University of Birmingham regularly ran up to and in excess of 120 miles per week in his senior career, citing 7 mile progression runs with an incremental building of the pace as instrumental to his development along with his marathon staple of running 8 miles easy and 8 miles at marathon effort (becoming ‘a friend of marathon race pace on tired legs’).

His belief is that the habituation of moving through the proverbial gears rather than getting into a running rut of one-pace familiarity. Even splits, he says are, “the art of the perfect marathon. You tread a fine line as you look over the precipice. One step to your left and you fall to your death- one step to your right and you are too far inland, too comfortable and too slow!”.

When questioned about the inevitability of injury as one’s biological and traini9ng age increases as an athlete, the man who has bagged numerous 12 stage and national cross country team titles with Leeds City AC says with tongue firmly in cheek – “Endurance runners never have injuries! We have niggles don’t we, because we all live in denial!”

He is keen to talk about prevention rather than cure, cautioning you to keep things simple by reminding you that, “Only two basic things cause injury- too far and too fast! By taking a proactive approach to maintaining your strength, fitness and health, you take charge of your propensity to injury. Too many runners blame shoes, bad luck or bad physios rather than their own approach to training.”

In citing tight hamstrings as a bug bear of his at periodic points of his career, the athlete who ran in European club cross country championships in both Istanbul and Portugal, stresses the importance of all athletes, including those of masters status to routinely return to the foundational layer of the pyramid of long term athlete development and to work on fundamental movement patterns.

“Drills have always been an integral part of my training. You need them to hone your running style”, he asserts.

As well as his tremendous aerobic engine Darran, who has acted as a Team GB manager, is keen to emphasise his take on ballistics. The term ballistic refers to a method of training, where the athletes’ often an object is explosively projected into a flight phase (Newton and Dugan, 2002) but with Darran it was his own body that would be, “thrown across water jumps and over stiles” on the mud of Yorkshire cross country courses.

“Everyone thinks I’m a tarmac terror!”, he laughs, “but my real love is the country”, before giving a nod to the benefits of off road work in terms of mixed mechanical loading.

Whilst Darran does not engage in formalised cross training unlike many athletes, significantly with a nod to his childhood exploits on both bike and skates he points out that, “My day job involves manual handling to support those with disabilities and I’m a manual handling champion who is obsessed with biomechanics and anatomy. The more you know about biomechanics, the more you can do to prevent injury.”

What is significant with this 55 year old is that unlike many masters athletes who accept the inevitability of performative decline over time. Darran does not subscribe to the biologically determinist school of thought. Whilst accepting that nature will take its course he is adamant that lifestyle choices (are paramount in understanding why many athletes of masters status run slower times.

He asserts that because of the passion he has for his current role working with those with disability for the Joseph Rowntree Housing Trust, he chooses not to train twice a day any more. It’s not that he can’t, it’s just that the things that matter to him in life fill his time more.

With a shrug he says, “Slowing down and having to cut back on your training load is not just down to the ageing process. Some of it is mental. Some people think ‘I’m older so I better ease back on training and racing. This then leads to a decline in performance which leads to further reduction in training. It’s a self-fulfilling prophecy! However, I accept that people have real lives too and often you have to prioritise other things. Ultimately it’s the individual’s choice and you get out what you put in”.

Refreshingly the above sentiments give choice and agency to the athlete and end on a note of optimism for the masters athlete.

1. How does my training age affect the frequency, intensity and time spent on running?
2. What am I doing to return to foundational and fundamental athletic development as an inherent part of my schedule?
3. How does the training philosophy I have embraced guide the core principles of my work?
4. What lifestyle choices am I making in terms of my time and how is this shaping what I want from the sport?

Matt Long and Darran Bilton work together as England Athletics Coach Education Tutors. As both a Midlands Road/ Cross Country Team Manager and Midland Masters Team Manager, Matt can be contacted at mattlongcoach@gmail.com