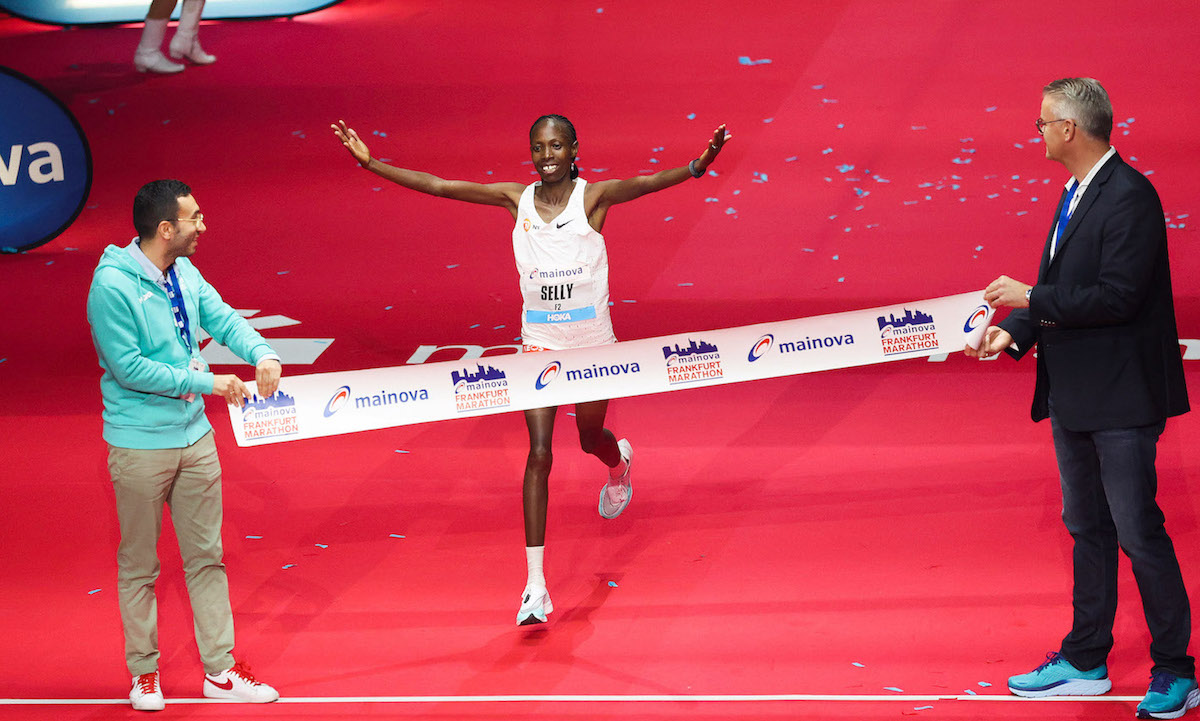 Dublin, Frankfurt and Snowdon offer all kinds of marathon fun. Speedy 5ks in Battersea, Barrowford and Hyde Park and cross country finally gets a bit muddy.

Pre-race favourite Selly Chepyego Kaptich didn’t manage to break the course record as hoped, though she did look like she was at risk of breaking something else when she tripped over the finishing tape. Nevertheless, she’d already won by that point, topping the Frankfurt Marathon podium in 2:23:11 and leading a 1-2-3 for Kenya.

The heatwave put a brake on what might have been a crop of personal bests on the traditionally fast course but one record was set: temperatures of around 20 degrees Celsius towards the end of the elite race made this the warmest Frankfurt Marathon in 33 years.

On the more gnarly end of the marathon spectrum, Marathon Eryri Snowdonia treated runners to hail, horizontal rain and some tasty climbs. Daniel Kashi of Sale Harriers still managed to knock out a 2:39:51 for the win – incredible. Equally awesome, Caroline Brock of Steel City Striders took her victory in 3:13:43 .

Talking of dodgy weather – after gales and torrential rain last year, runners at Leicester Half Marathon were treated to near perfect conditions today. Capitalising on that fact, the top four men finished under 70 minutes – Ryan Creech being the first home in 66:31. Local speedster Mo Hussein clocked 68:41 for silver with Danny Hallan 69:03 and Jason Bennet 69:43 just behind. It was a tight race at the top for the women with less than a minute in it. Kate Wells raced home for the in in 85:21, closely followed by Vicky Baddick in 85:35 and Rebecca Randell in 85:43.

Podium 5k was back at Barrowford this weekend. Andrew Milligan topped the rankings in 14:23 ahead of Sam Charlton in 14:30 and Jack O’Leary hot on his heels in 14:33. Sophie Harris is making the most of the move up north, clocking 16:30 for her win. Eleanor Anderson was runner up in 16:48 and Sinead Bent third in 17:02.

City of Lincoln 10k produced some punchy times. Abbie Donnely ran a storming 32:51 to win the women’s race. Runner-up Sophie Wallis was hardly shirking with a 33:56 clocking and Emma Hodson in third with 35:44. Lewis Jagger logged a 30:32 to win the men’s race ahead of Shane Robinson’s 30:52, with Cameron Dockerill keeping it sub-31 with 30:55.

Cross Country finally gets some mud

Surrey Vets XC also took place on Saturday in Nonsuch Park. There were two races – 6k for W35 & M60 and over, then 9k for M40 plus . We don’t have official results but are told that the ladies winner was Gabby Reynolds of Herne Hill and men’s winner was Duncan Walmer of Walton.

Over in the States Charles Hicks won the Pac-12 XC Champs representing Stanford.