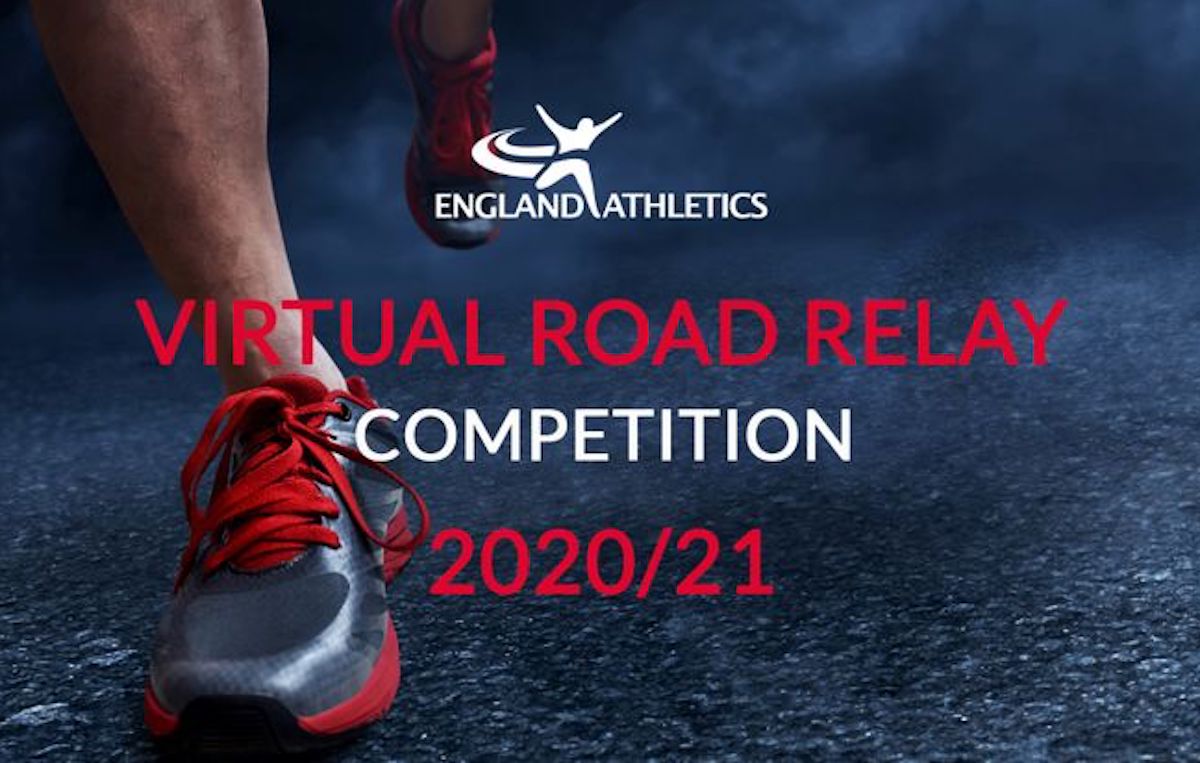 The new national lockdown has once again put virtual racing back on the agenda as the only competitive option for UK distance runners, at least the ones without ‘elite athlete status’. Gill Bland brings us the details.

After a slightly extended racing window due to poor conditions over large parts of the country, the qualifying round of the​ England Athletics Virtual Road Relay​ competition closed for entries this Thursday. Over 3,000 runners took part in the free event covering five mile legs. With mixed teams of 4 women and 4 men to score it was a great chance for clubs to show their depth of talent.

Going into the weekend Guildford and Godalming AC’s Andy Coley-Maud was top of the leaderboard with laps on the former airfield at Brooklands. Coley-Maud who works for Sport England tackling inactivity and inequalities led by example, setting an excellent marker of 24:09. However, a late charge from Matthew Dickinson, making good use of his Dulwich park loops, saw the leaderboard change and the winning time dip under 24 minutes, as the Clapham Chaser logged 23:57.

In third place was M40 Andy Norman of Altrincham & District Athletic club who looks to be returning to some good form, clocking 24:18, followed by a three-way tie for fourth place from Nick Bowker (Clapham Chasers), Jack Gray (Cambridge and Coleridge AC) and Daniel Brookling (WSEH) all of whom finished in 24:19.

Brookling’s result is particularly interesting given that he is an Under 20 athlete who has a good grounding in a variety of distances but has no racing times logged over 5k. In the process of this result he ran 5k just 4” off his PB – looks like there’s more to come from the youngster once racing resumes.

Leading the overall and the age-graded women’s results was Rebecca Johnson of Highgate Harriers who chose a lap-and-a-half route near Perivale to grab a few crowns and a 27:36 finish. Emma Styles (Nuneaton Harriers) took second place in 27:46 in a performance that comes off the back of only two races in the last two years, and those over the Half and full Marathon distance. Gemma Kersey (Basildon AC) finished third on the board with a 27:57, Hannah Viner made a strong bid for Highgate’s progression to the next round, adding a 28:06 fourth place finish to the ‘gate’s tally.

Club team results are currently being ratified and England Athletics will confirm the Top 50 teams to progress to the National Round early this coming week but as it stands Windsor, Slough, Eton & Hounslow topped the 128 clubs who filled a full team of four women. Their time of 3:41:47 is just 16 seconds clear of Cambridge & Coleridge with Wirral AC third with 3:42:42. The leading club from the next round will go on to compete against the leading club from Scottish, Welsh and Northern Irish Athletics’ own relay competitions.

Donald and Johnson lead in Scotland

The ScottishAthletics ​Lindsays Virtual Road Challenge ​closed off its results with James Donald (Dundee Hawkhill Harriers) retaining his early lead and taking top spot over 8k in a time of 23:45. Gavin Smith led the charge of the Cambuslang Harriers as they took second, third and fourth place in 24:30, 24:38 (Jamie Mackinnon) and 24:57 (Craig Jardine).

Rebecca Johnson of Edinburgh University Hare & Hounds was fastest for the women in 27:37 (we’re not sure how it works using the same run for two competitions…if that’s what happened!). She beat Jenny Bannerman’s time of 27:56 for Inverness Harriers AAC and Naomi Lang made it an Edinburgh uni sandwich, taking third in 28:40.

It’s quite nice to have an event which takes place just on one day sometimes to make it feel more like a “race day” and the ​Runderwear virtual 10k​ takes place today. At the time of writing, (if we skip the usual suspect world-record-breaking times!) lots of results were still due to be logged and there are perhaps questions around the leader, Mary Taylor whoops time of 38:58 would see her ranked well inside the top 20 UK all time V55 times if in a real race….

Nick Bester holds the men’s pole position in what would be a PB time of 31:27 for Herne Hill Harriers. He ran his race effort by going out hard in Battersea Park and hanging on for dear life – it seems to have worked!

There are a few club-specific challenges in progress at the moment. The second in the Grantham Running Club ​ 5k series currently sees Sam Clark (18:46) and Holly Durham (21:25) in the lead. The ​Serpieshere virtual 5k series ​is a bi-monthly handicapped race in which runners canl see their results age-graded as well, to provide extra motivation.

After a November 5k blaster and a very muddy December Hash-cross country challenge the ​Huncote Harriers Grand Prix Series ​has moved onto the more palatable Huncote Combo 7 mile race, which runs alongside the mainly-for-fun-but-actually-quite-competitive ​Who Runs The World men v women mileage challenge. Earlier in the week it was neck and neck at aoru 2,300 miles each but the men were starting to draw away again by the weekend. Andy Wilford and Marie Wilford have run furthest so far clocking 122 and 117 miles respectively since since Jan 3rd

Morecambe Virtual Half ​will be tallying up their results and posting out their medals and t-shirts now that the window for running has closed. It doesn’t look like there will be a published leader board but we will keep an eye out.

Miles of dedications for John

The Virtual ​Montane Spine Race ​continues apace. In a very moving gesture runners have been dedicating their miles to popular Scottish runner John Kynaston who sadly passed away form a heart attack this month. Fast Running’s Robbie Britton said ‘John was hugely loved within our sport and his loss was felt personally by many of us. He was a lovely bloke and will be deeply missed’.

The final leaderboard will be published on the 31st January. In the meantime why not have a listen to this fascinating interview with previous OA winner Jasmine Paris ​here​ at Way of The Runner. Paris has been pretty quiet this last year as she took time off the have her second child. It’s a interesting insight into the mindset of a very accomplished Ultra runner.

Please do get in touch if your club is running any events you’d like us to cover. It’s great to hear all the efforts people are going to.