Life’s too short to sit and taper 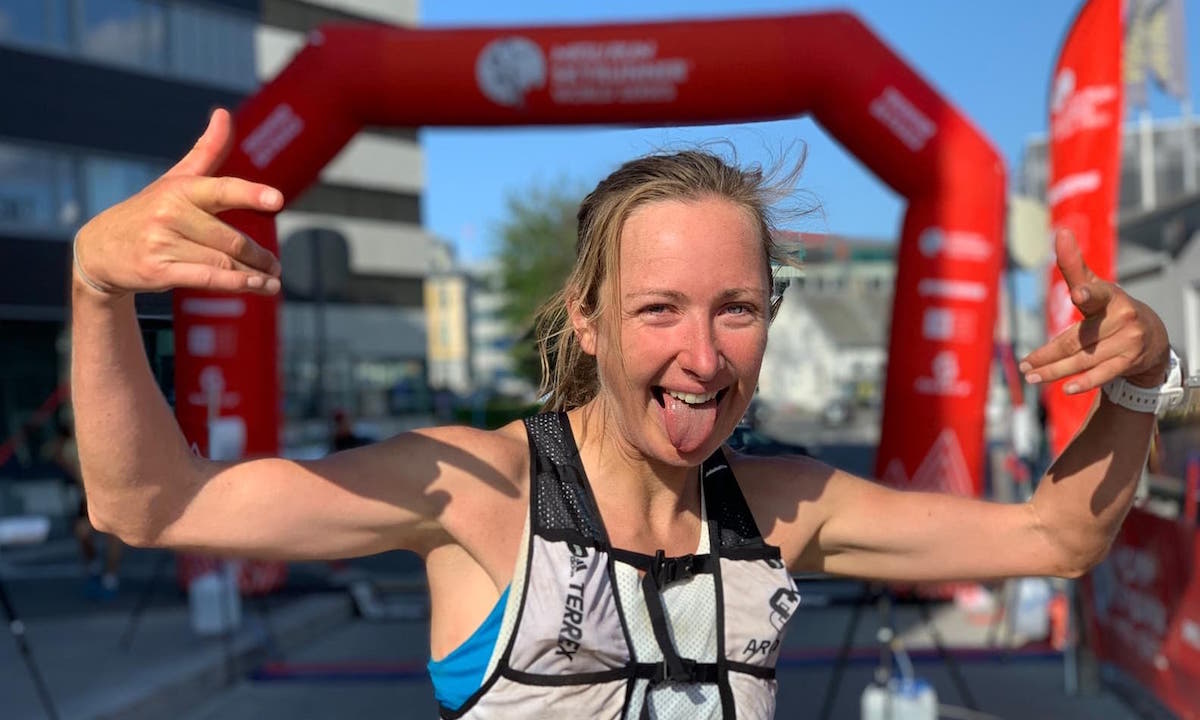 Holly Page is back racing and travelling across Europe so we’re grateful to have another excellent article from the fell and mountain running star.

July seems to have gone by in a whirlwind and it’s already August now as I realise that I have neglected my article writing duties for July. I’m sat in my (now repaired…. at disastrous expense!) van on top of the Simplon Pass on the Swiss/Italian border.

This time yesterday I’d had to be woken up by the air hostess on a flight back from Norway after I hadn’t even noticed that the plane had landed. Why the exhaustion?

I’d just been in Norway for the infamous “Tromso Skyrace”, 57km with 4,800m of climb which I’d known would be the ultimate test for my body and its return to form. More on that later. I may as well start my July update chronologically otherwise I will not only confuse you the reader but also myself.

Back to the start of the July

I’d been asked by my sponsor Adidas Terrex to attend Love Trails Festival on the Gower Peninsula, a fun weekend of trail running workshops, talks and of course showcasing some excellent dance moves. I tied it in with a quick trip back to visit the parents in Yorkshire, obviously also squeezing in fell races on each evening I was back. There really is something glorious about perfect summer evenings in the Pennines; cycling to a race, blasting around a course and enjoying the company of fellow fell runners afterwards.

After Love Trails I flew out to the Pyrenees to race the Buff Epic Skyrace which counted for double points in the Skyrunner Series. I’d hitch hiked to the same race last year but this year I hired a car which gave me much more autonomy to explore the surrounding peaks before and after the race.

A couple of days before the race I headed up Pico Aneto, the highest point in the Pyrenees. A long hike including having to cross the glacier maybe wasn’t the best race preparation but life’s too short to sit and taper! This was my third time coming to this race, but there is so much to do in the area that it would take me a long time to get bored of it – pristine rivers, beautiful meadows, big peaks… Life’s too short to sit and taper

The race itself was a tough one – forecasted storms meant that the course was changed but it kept the same profile; 42km with 2,800m of climb. It was a really competitive field and I had no expectations going into the race but surprised myself (and many others) by somehow managing to finish third, after quite a battle with Ragna Debats.

The next weekend I raced at the Dolomyths Skyrace in the town of Canazei. I am always inspired by the towering peaks of this region. Having travelled all over the world somewhere like the Dolomites really makes you realise how lucky we are in Europe to have such geographic and cultural diversity on our doorstep.

That race didn’t go particularly well and I finished feeling disappointed with myself. I always used to think that downhill running was my greatest strength – I think that comes from having been pretty rubbish as a junior fell runner, having to rely on my downhill skills to make up for all the time I would lose on the climbs. But since the foot breaking fiasco I’ve been really cautious running downhill and I think I lost my mojo a bit – I was three minutes slower on the downhill than last year so that’s definitely something I need to work on.

Beer, pizza and gelato to the rescue

I felt much better after some beers, pizza and gelato though and enjoyed a lovely “recovery” hike up Marmolada, the highest point in the Dolomites the next morning, followed by an overambitious bike ride where I bonked so hard that I was searching for discarded food wrappers in the gutter as I made my way up a final climb.

Lesson learned, I took plenty of gels with me for my next day’s ride over the famous Stelvio Pass before meeting up with friends for a few days of training and van camping in Living. My aim of totally destroying my legs that week was very much achieved, so much so that I wondered whether I would even be able to make it round the short course of the Giir di Mont race that weekend. Of course they managed the seemingly short burst around these Italian hillsides and it was fun to have three Brits on the podium! Some quiet before the storm

Coming up the next weekend was the aforementioned Tromso Skyrace where I knew my legs would need to be feeling good if I was going to make it round the course in one piece. So I packed my tent, a load of food and some good books into a rucksack and hiked off into the Orobie Mountains for a few days of solitude.

It was blissful camping by a pristine lake; no phone signal, just reading, napping, overdosing on wild berries… blissful until I woke up one morning to an almighty thunder storm, huge hailstones pelting my tent and the beautiful meadow I’d camped in had become a torrent of raging water.

I knew that it was safer in the storm to stay in my tent, but I feared that with the rising water levels I risked being washed away. I had no choice but to break camp, though I was admittedly quite scared as I packed up my tent, the storm throwing everything it could at me. As I scrambled over boulder fields, my tent poles strapped to my rucksack, I was worried I would be struck by lightning. I’ve been in similar situations before and it always surprises me how calm you stay, just going into survival mode, only focused on trying to get to a safe place as quickly as possible.

RELATED: Holly is back racing in the mountains

Safe to run another mountain

Anyway, I obviously came out of it unscathed just a little mentally drained. Next stop Norway. After a night contending with hooded Italian youths on mopeds somewhere near Milan, I parked my van in a forest near the airport then walked past the prostitutes and along the motorway to avoid having to put it into an airport car park… I did wonder whether it would still be there when I got back.

Tromso is well north of the arctic circle so daylight is omnipresent. The Tromso skyrace however has become well known for its terrible weather. This year was an exception. A really strong field of women lined up for the race and I had decided to run my own race, try to enjoy it and just see what happened.

I took the first few hours easy, admiring the spectacular views and making sure I kept drinking and eating. I surprised myself by running well down the steep snow and vertical descents early on, getting into second place after about two hours of running.

More than just a running race, an adventure

I love races which combine running with some scrambling and although I was pushing hard, relished the climb along the imposing Hamperokken ridge. The organisers had put a rope up to the summit as it’s a class 4 climb and it was especially useful for lowering ourselves back down the rock face.

I won’t go into great details about the race as that’s not particularly interesting for anyone, but I was very happy to finish second, breaking the previous course record but not quite fast enough to catch the eventual winner, Johanna Astrom from Sweden. I felt strong throughout the second half which was a great confidence boost and shows that my body can still cope with eight hours of hard effort.

Back to the Alps

And now back to my van on the Simplon pass. This year I’m taking everything race by race, not wanting to plan too far ahead. The problem with this strategy is that it means I have to draw on my terrible decision-making skills pretty much on a weekly basis.

If I had a coach I would have been told to have a rest for the next week, let my body recover, but as I don’t have to report to anyone, I have made the rather illogical decision to go to the Sierre Zinal race in Switzerland, a super fast course with next to zero technicality which doesn’t play to any of my strengths… but it’s in a beautiful location and there will be lots of fun and friendly people there.

I go to races to try as hard as I can, I’m not afraid to be beaten by people who I would ordinarily be in front of if I didn’t have tired legs; as long as I know I’ve given it my best shot, I will always come out of it happy. So here’s to a happy August. Enjoy the summer everyone!