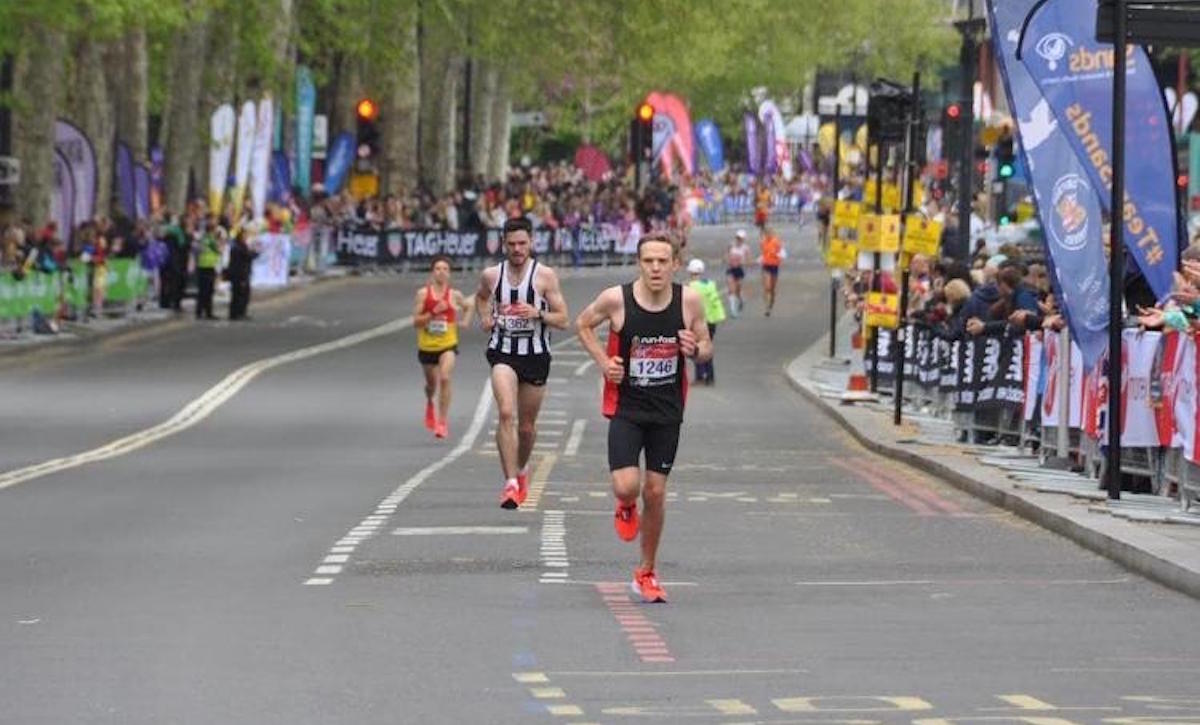 “I was kicking myself a bit at first but in hindsight I am happy with the race, I gave it a good go and it has made me hungry to keep going,” said the England marathoner. “In all honesty I thought 2:20 was in the bag until I saw the clock at 800m to go.”

Many of us have been there, chasing the clock at the end of the marathon and giving it everything. Trusting your maths at the end of a marathon ca be tricky too.

“I thought I worked out I had about 2:30 to cover the last 800m.  I thought this was a tough ask as I was hanging on at that point. In fact I had more like 2:37 to go due to chip times but I wasn’t really thinking. The clock at the finish was on gun time so I thought sub 2:20 was well gone but it turned out I was pretty close…”

With three seconds the difference on the day, the Run Fast athlete is clearly confident that sub 2:20 will come.

It was after seeing the 2016 England team for the Toronto Waterfront Marathon that Johnson figured he was in with a chance. As a 2:26 marathoner after a great run at Amsterdam that year, the IT worker decided to go after the England Athletics 2:22 standard. Why not?

“We built up to London with 2:24 in mind but 2 weeks before the race I knew I was in better shape than that. When they asked I still told most people I was aiming for 2:24 but I believed if I had a perfect race I could get under the standard and have a chance to qualify.”

“I paced it well despite getting out kicked by an ultra runner named Lee Grantham in the closing stages…  When I tried to drop him around half way I thought he was taking the piss as he pulled a bag of pick and mix from his shorts,” laughs the marathoner. “Nevertheless, he came back past me with about 800m to go and finished three seconds ahead.” [Never count out an ultra runner in a sprint finish, we know how to suffer – Robbie]

“Fortunately it turned out we both qualified for Toronto along with Jonathan Poole who was a few seconds ahead.” So in Autumn 2017 Johnson travelled to Canada as part of the England team, but as many have done in the past, the tough waterfront course proved problematic.

“The race was a great experience, we were treated like serious athletes and set out to run 2:20 pace in a train formation, similar to British Cycling. I was in good shape but on this day we didn’t respect the course, conditions and our level of fitness enough.”

“The train got a bit derailed for various reasons, but I was pleased with finishing 12th in an IAAF Gold Label race,” reminisces the runner. “I had been a bit isolated from half way and felt I had more in me in terms of time.  Looking back this was a big learning and I definitely made some mistakes along the way.”

With a marathon PB of 2:20 and small change now there may well be more opportunities in future, although the standard of runners selected for England is growing very year. The runners going to Frankfurt and Toronto this Autumn have all run comfortably under 2:20, some well under.

With three half marathon PBs in eight weeks and a marathon best of over 90 seconds what does the London based runner feel has helped make the difference?

“Nike 4% shoes…” laughs Johnson. “But seriously they’re very light, but cushioned and springy. A great mental boost at the very least. I’ve started working with a new coach, Nick Anderson, and that has helped add some structure, but I’ve worked with a lot of great coaches over the years like Richard Shearer, George Gandy, John Mackay and Peter McHugh. They’re all taught me something important.”

“I also look up to runners like Dewi Griffiths, Eluid Kipchoge, Haile Gebreselassie, Steve Prefontaine, Steve Jones, Charlie Spedding, Callum Hawkins… Almost too many to mention” It seems that inspiration comes from many avenues for Johnson.

When discussing training it’s clear that the former Loughborough student isn’t doing anything too complicated or wild, but nailing the basics.

“It’s 90-100 miles in a full training week, spilt over 11-12 runs. I’ll have some work faster than 10k pace, a medium long midweek, something working on my aerobic threshold and a longer effort including some race pace.”

“Importantly there’s only ever two or three hard days, most of the rest is easy. I used to go out and run steady every Friday lunch time, just because the lads were hitting the canal and chase fitness after a few days off with a niggle but now I’m more trusting of the process.”

“I’ve been taking the running more seriously since November 2015 as before there were always breaks for other life commitments” and the progression can be seen due to this. Consistency and persistence paying off for the “about 30” year old.

Getting it right on the day

“I was always told to respect, but never fear your opponents,” is the start of some solid advice. “Basically run your own race… the only thing you need to beat is the little voice in your head telling you to slow down, you can’t control what anyone else does. Don’t be intimidated by someone’s pervious performances, they could be having a bad day.”

Apart from that, what else matters on race day? “Well three visits to the toilet is better than one, it is better to be safe than sorry.”

Food wise Johnson has a decent formula, with four gels during the race and one at the start. “They’re SiS gels, two with caffeine and two without, take at 6, 13, 19 ad 23 miles. I’ll have some water depending on the temperature and tip some on my head to cool down.”

The watery consistency of SiS gels, each actually 60ml of liquid, means they’re bigger than other gels but you’re getting some fluids in with each one too.

“The best executed race I’ve ever had was my 10k PB on the road. I paced it evenly and felt like I ran that as fast as I had in me on the day.” Had London marathon been five or six seconds quicker we might guess that answer would have been different? Ha.

What’s next for the 2001 Mere Brow youth club Connect 4 champion? Fast Friday at the time of interviewing, although that will have already happened by the time this in on the website, but an autumn marathon is certainly on the cards.

“I’d love to go back to Berlin one day as I think on the right day it’s such a fast course someone could run the world record there. Frankfurt has also produced some good times and a bit later in the year so would suit me. Amsterdam and Valencia are also potentials too.”