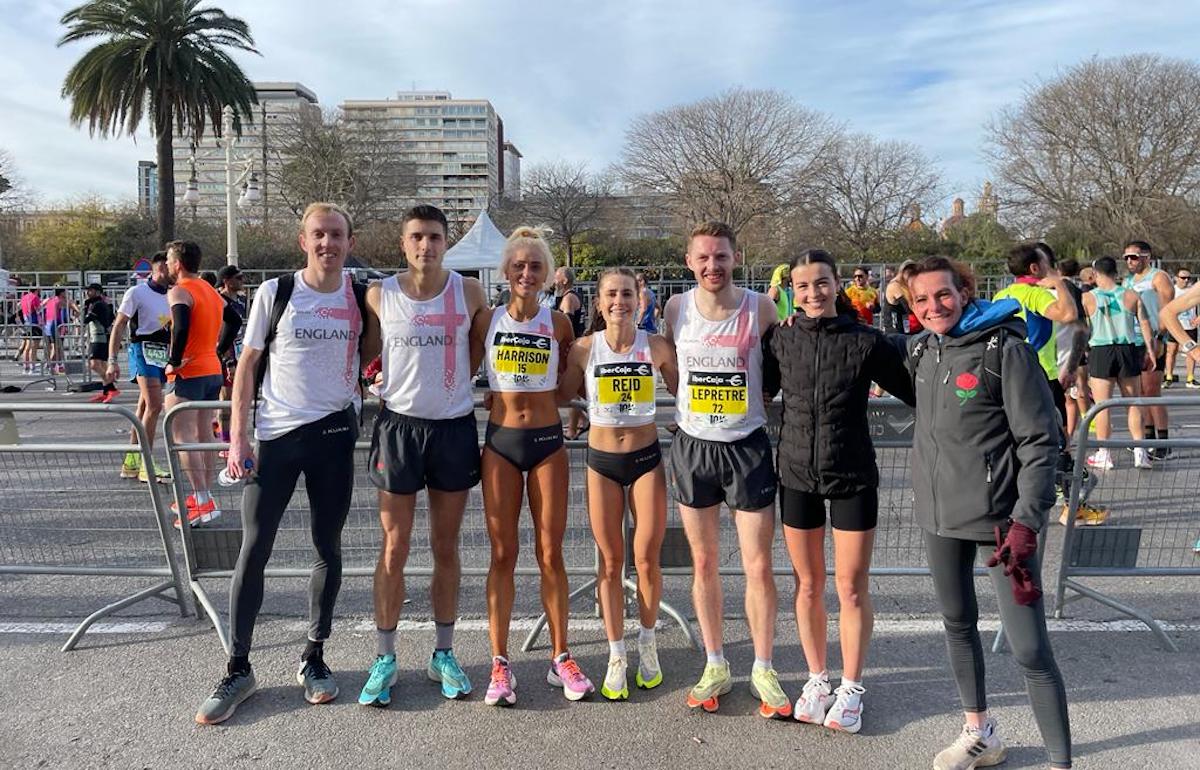 Houston, We (Don’t) Have A Problem

Yes, of course I am going to try and shoehorn in a space-related pun when talking about the results of the Houston Half Marathon, where Jess Warner-Judd produced one of the best British half marathon performances in history with a 67:19 clocking; a time that only Paula Radcliffe, Eilish McColgan and Liz McColgan have bettered. That time is a 33 second improvement in only her second attempt at the distance, her first being the same course last year, and saw her finish third behind Ethiopian Hiwot Gebremaryam (66:28) and Emily Sisson, who bettered her own American Record (67:52).

I think it’s fair to say Jess did it the hard way too, after a blistering 15:31 opening 5km (sub-65:30 pace) and a 31:17 10k split. I’m excited to see what she might be able to do in a more evenly paced race, plus of course more experience at the distance. I firmly believe that Jess is one of our must under-rated athletes; she’s run in major championships at every distance between 800m and 10000m over the past ten years and, if you’re a fan of rather niche statistics, as of today she is the first British woman to have run sub-2 for 800m and a sub 67:30 half marathon.

It was a good day in the Warner-Judd household overall, as Rob Warner finished his debut half marathon in 69:36. US-based Scot Max McNeill was the fastest British male with 67:24 to finish 49th overall.

As a side note, it was good to see one of the all-time racing greats Tirunesh Dibaba make her return in her first race in four years after having two children, she finished sixteenth with 71:35.

A number of British athletes headed to the Spanish coast in search of a fast time in a city well known for delivering PBs. Whilst it’s never nice to start with a negative, it feels necessary to say the scenes at the start of the Valencia 10k were scary, chaotic and I am sure also avoidable. In what seemed a very small starting area for such a large race many athletes fell and were trampled, with one dislocating a shoulder in the process and a number not finishing as a result. Numerous athletes have commented on social media on how unsafe they felt, and some of the performances of those who finished were undoubtedly impacted. Hopefully steps are taken to avoid such scenes in the future.

Had heard a number of Brits were impacted by a fall at the start, I wasn’t expecting this. https://t.co/ZuG8n8ocRt

With that said, there are plenty of positive performances to talk about. They are lead out by Samantha Harrison who has carried her excellent form from 2022 into the New Year with a 30:51 clocking, a significant improvement on her previous best set at Telford. It sees her become only the fourth British woman to run under 31 minutes on the road. Excellent! Behind her there was a fine debut over the distance for Amelia Quirk (31:49), slotting her into sixteenth on the UK all-time list, with Steph Twell running the third fastest 10k of her career (32:25). Lucy Reid (32:54), Elle Twentyman (33:33), Naomi Mitchell (33:38) and Helen Hall (33:42) all ran well and may well have run quicker if not for the chaotic start which left some of the athletes named with cuts and other injuries.

There were plentiful encouraging performances amongst the men racing, also. Andrew Butchart (28:06) was just one second shy of his 2021 lifetime best, with Zak Mahamed (28:24) improving his best by over three minutes – although he has not raced a 10k since October 2018.

Sixteen men ran inside 29 minutes in 2022; twelve did it in one race today. Valencia’s reputation for speed remains intact.

Whilst it may have seemed like half of Britain’s distance athletes were in Spain (or an exotic location warm weather training) this weekend, that did not stop there being some noteworthy performances at home – despite the continued less-than-ideal weather conditions.

Highlights include the Brass Monkey Half Marathon in York, where Joe Sagar (66:21) took victory just six seconds ahead of Kieran Walker (66:27) with Lewis Gamble-Thompson (67:08) third. It was less close amongst the women, with Georgia Malir (75:10) taking precisely one minute off her lifetime best to finish clear of Alyson Dixon (76:48) and Charlotte Mason (77:00), the latter improving by 70 seconds.

Racing at Dorney Lake and following on from a Parkrun PB to open the year, Abdirahman Hamud (72:50) took a commanding win in the half marathon – over five minutes ahead of the rest of the field – his first race over the distance. Rozzie Batchelar (86:50) was the fastest female by a similar margin. The quickest 10k times went to Ian Connock (35:59) and Hannah Pullen (37:26), whilst Sarah Stallwood (20:23) and Spencer Bateman (16:51) took the honours in the 5k.

This weekend saw the return of various cross country leagues across the UK, as well as the British Athletics Cross Challenge. Held in fixture in Perth in Scotland, there were wins for Megan Keith and Jamie Crowe in the respective senior races, the former in her first race in the mud since taking U23 silver at the European Cross Country Championships. She finished 14 seconds clear of Fionnuala Ross and Scout Adkin. In the senior men’s race, Crowe finished ahead of Swansea’s Kristian Jones, a notable victory after missing much of last year with injury. Tonbridge’s James Kingston was third.

There were wins for Herts Phoenix in both senior races of the fourth fixture in the Start Fitness Met League held in Welwyn, thanks to Elizabeth Janes and Oscar Bell in the respective races. Moving south of the capital, Georgie Grgec (Herne Hill Harriers) and Jack Millar (Thames Hare & Hounds) took wins in Division 1 of the Surrey League, held at a muddy Beckenham Place Park, whilst the Division 2 races, taking place at Chobham Common, went to Fulham’s Charlie Sandison and Croydon Harriers’ Penny Oliver.

Moving to Berry Hill Park in Mansfield and the North Midlands League, where just four seconds separated Ben Connor from Samuel Moakes, of Derby and Notts AC respectively, over the 10km course. It was even closer in the 6km senior ladies race where Nikki Bartlett of Race Hubs took the victory by just one second from Frederich Richards of Worksop Harriers. Staying in that general part of the country, Grace Carson was a comfortable winner of the Midland Women’s League Division 1 fixture at Warley Woods in Smethwick, whilst the Division 2 race in Stoke on Trent went to Cheltenham & County Harriers’ Tallulah Robin Redmond.

The Midland Women’s League fixtures were held in conjunction with the Birmingham & District Invitation Leaguewhere Baptiste Fourmont of Loughborough Students and Dom James of Western Tempo recorded wins in Divisions 1 and 2 respectively.

Bedford & County AC took four of the top five spots in the senior men’s race of the Chiltern League at Campbell Park in Milton Keynes, led by Ben Alcock who finished almost 45 seconds ahead of the rest of the field. It was a Bedford victory in the senior ladies race also thanks to Rebecca Murray who crossed the finish 58 second clear.

Kate Estlea (AFD) and Thomas Syckelmoore (Basingstoke & Mid Hants) were victorious in the Hampshire League at Prospect Park in Reading, whilst there was a twelve second margin of victory for Nigel Martin (Sale Harriers) in the Manchester Area League at Tatton Park, with Naomi Kingston (Altrincham & District) taking the senior ladies race by over one minute.

Finally, there were victories for Kirsty Maher (Lancaster & Morecambe) and Matthew Briggs (Lancaster University) in the Mid Lancs League at Lawson’s Ground in Blackpool, with Jordan Howes (Medway & Maidstone) and Renata McDonnell (Deal Triathlon Club) taking the top spots at the fifth match of the Kent Fitness League, held at Betteshanger Park in Deal.

Others turned from the roads and XC leagues to the trails in search of racing opportunities. These included Russell McGavock (1:34:01) and Jackie Stretton (1:50:17) who took wins at the 32nd edition of the Benfleet 15, whilst the Montane Delamere Trail Half Marathon went to Luisa Candioli (89:47) and Chris Holdsworth (74:25).

In Italy, Fast Running’s Robbie Britton and his wife Natalie White both won at the excellently named Monte Prealba Softly Hard Trail race in Bione. It took in over 1,850m of elevation gain over a near 26.5km course, not one for the faint hearted, but Robbie was rewarded with a new hat and some coffee as a prize – not a bad deal I’d say.