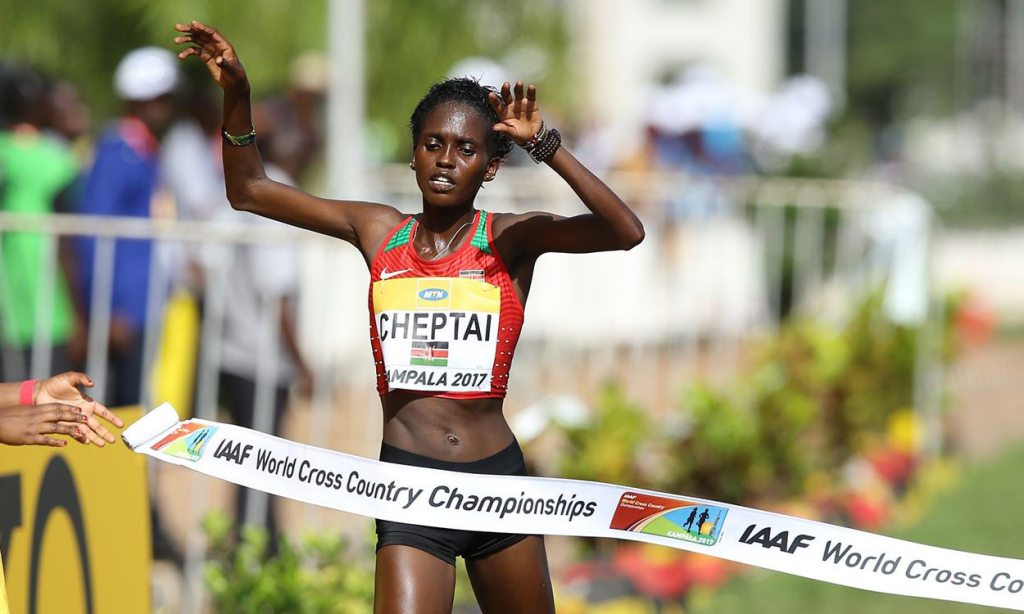 The Keynan team ran most of the race tightly together, before Cheptai broke to the front in final 1K to claim the gold, crossing the line in 31:57. Teammates Alice Aprot followed to claim silver in 32:01, and Lilian Kasait Rengeruk claimed the bronze in a time of 32:11.
Cheptai crossed the line in 31:57 four seconds clear of Aprot, and 52 second before the first woman not wearing a Kenyan team kit.

USA athletes
Three USA athletes finished in the top 30, helping the US claim 5th place in the team standings.

The first to cross the line, was Aliphine Tuliamuk, in 15th place, followed by Stephanie Bruce in 21st, and Natosha Rogers finished close behind in 22nd.

Great Britian Athletes
GB’s Louise Small worked hard to move from 81st after the first 2K to finish in a very respectable 38th. Next to finish for the Great Britian team was Rebecca Murray in 42nd place. Unfortunately Emily Hosker Thornhill and team captain Claire Duck failed to finish the race.

The men’s U20 race produced a bit of history, with Uganda’s Jacob Kiplimo putting in a stunning performance to win gold. The young athlete covered the 8km course in 22:40, and his victory was Uganda’s first ever gold medal at a World Cross Country Championships.

In the women’s U20 race Ethiopia’s Letesenbet Gidey claimed gold for a second consecutive year. The 19-year-old becomes only the fourth female, in World Cross Country Championship history to win back-to-back U20 titles; joining fellow Ethiopian Genzebe Dibaba, and Kenyan’s Viola Kibiwot and Faith Kipyego, on the list.

With no great success on the track to date, the 5000m runner Gidey, will now hope this victory will help launch a successful track senior career.