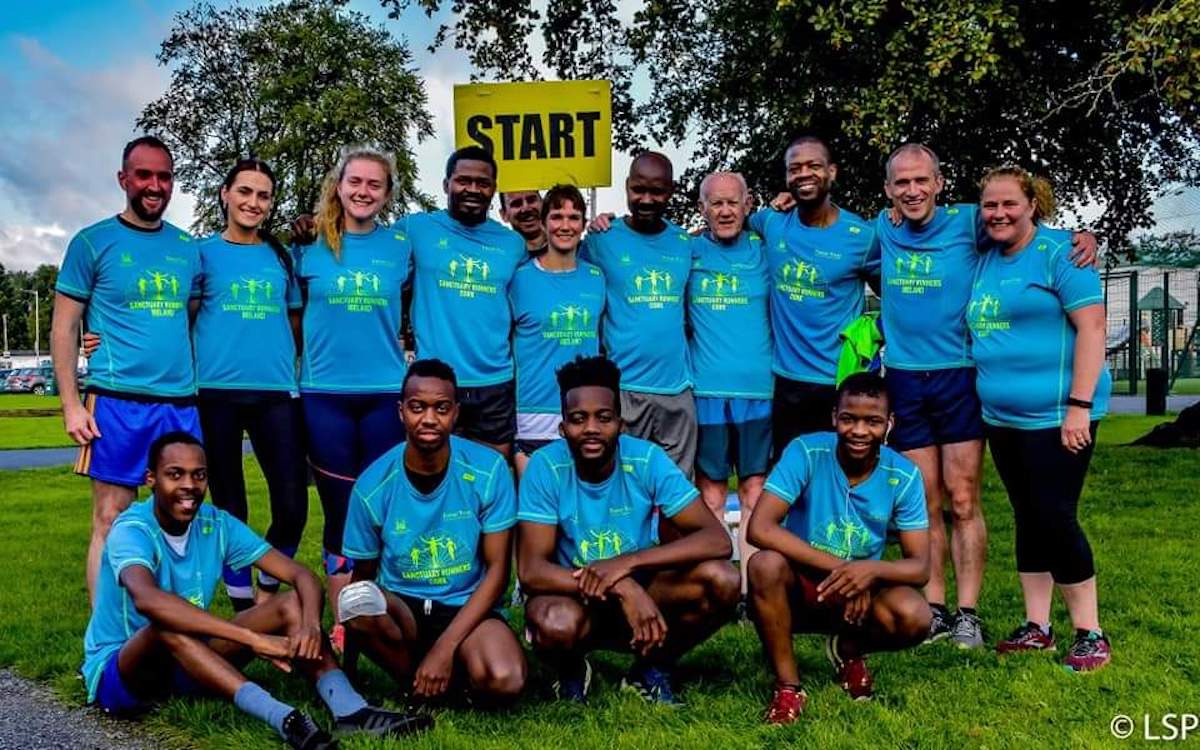 Bláithín Sheil is a Sanctuary Runners regular and wants more people to know about the great initiative in Ireland.

Historically, the Irish migrated away from this island for economic reasons. But now, as a wealthy European country, people migrate here.

That changes the demographic of our country, and now we have a responsibility to engage with the diversity of cultures that live here. As runners, we have a unique opportunity to be open minded and create space in our sport for integration and learning.

So in June 2020 we caught up with Graham Clifford, a proud Cork man and journalist who founded the Sanctuary Runners in 2018.

A non-political running group, its core values are to run in “Solidarity, Friendship and Respect” with people who are living in Direct Provision in Ireland.

Direct Provision is the system through which you go when seeking asylum in Ireland. It is highly criticised as an example of institutional racism, but that is not the subject of this article.

The organisation aims to break down barriers between the Irish and our migrant population.

The running takes place at various parkrun locations around Ireland, the groups now forming part of the regular squad of attendees at each event. They are as much a part of parkrun as the person from the house down the road. We all have our barcodes and our parkrun personal bests. Running presents a unique opportunity to engage with racism

In recent weeks, various Irish athletes who do not have white skin have spoken out about their experiences of racism in its explicit and subtle forms.

Gina Akpe-Moses faced questions about why there was a black girl on the Irish team. Nadia Power called for more conversation about race, and wondered if the reason she has experienced less of it than her teammates is because she has one Irish parent.

The Sanctuary Runners creates an opportunity to meet people from different backgrounds in a very relaxed atmosphere.

“If we say that by virtue of the fact that we are white and live in a society in which racism towards people of colour exists, then we are racist and we need to understand our role in that,” said Clifford.

One of the key tenets of the Sanctuary Runners is that all the members are seen as equal.

It is not a charitable endeavour. “People come to the sanctuary runners with a charitable mindset and of course that comes from a good place. But pity is a fairly useless long term ingredient to have in a situation like this, because pity immediately distorts the balance between two people. And sometimes that is hard to get your head around.”

“It is seeing the person. You don’t block the skin colour out, it is just irrelevant.”

It reminds me of the powerful quote from activist Lilla Watson, “If you have come here to help me, you are wasting your time. But if you have come because your liberation is bound up with mine, then let us work together.” From my own experience of parkruns at Poolbeg, Clondalkin and Poppintree, I found that all the ways in which I might describe myself on paper become irrelevant when I run with this group.

What matters is wearing the t-shirt and being cheered on by the gang as I run down the hill at Poolbeg, high fiving my teammates as they run up it.

What matters was getting two guys to run a sub-25 minute 5k and the sense of collective victory in that accomplishment. What mattered was that this was an opportunity for them to meet me, and for me to meet them, on a level playing field.

What do the Sanctuary Runners seek to achieve?

“People are migrants for a range of reasons, it’s not always economic. We need to challenge our preconceived notions of who is in Direct Provision, and why they are there. We are still a million miles away from these things.” But this is a start.

Empty the head of preconceptions

How does someone join the group? “People ask what do I say, what do I talk about? Just clear your head and come as if you are meeting people that there is no difference, empty the preconceived notions about who the person is.”

“This is not about serious conversations, it’s just running. “If you have huge concerns about migration, if you are a conservative person who would rather less migration, still come!

Find out for yourself. Maybe you’re completely right in your head and maybe you can justify it. I don’t think you will once you get to know people.”

“The reason Sanctuary Runners has worked is because people have become friends with people first and then second, is their situation. The other great thing about running is, if I compare a person the first time I go into the centre, to a person after they have come running ten times, it’s totally different, It’s like it just strips away any of the caution, it disappears.

And I think that can only come with something like running. It becomes very honest. The rare moment in your week when it’s pure. You’re with your mate and you’re sharing that euphoria. It’s almost like a drug.”

It also enables Irish people to run in solidarity with people in Direct Provision.

“The onus is not on people in Direct Provision, it is on wider irish society, and this provides the opportunity for people like you and I to educate ourselves, to show solidarity. I think the key to change is getting white people in Ireland to open their eyes, their hearts and understand that we are all the same.” As the momentum builds in this conversation about racial discrimination, and we at FastRunning hope to see it continue, we ask ourselves what can we do as runners to contribute?

“We need to run and not overburden the running with an overtly structured way. We need to just be in that moment and we will learn as we go in a way that is positive, healthy, and sharing those unique moments with others. When we leave, we leave more informed.”

Clifford emphasises that the relationships we form here have to be natural and mutual friendships. “The transaction, for want of a better word, has to be the person’s time.”

“We are now talking about race in a way we never did before. It platforms the issue of racism in Ireland in a way that will appeal to those on the far right as well, it enables them to reach more people.

“My fear is that Black Lives Matter might dwindle but the right has been bolstered, that is a real concern. Platforming of peoples stories is really important, including young second generation migrants living in Ireland, people of colour in particular, that is really important to get those stories out.”

“People have been shouting and protesting about racism for so long here so that is why I wanted to try a different approach. Instead of focusing on the migrant, focus on where the problem really is: the rest of society.”

“If we see ‘white good’ and ‘black bad’, we will get nowhere. The answer to getting change is not always about who shouts the loudest, it’s about how clever you are, how you come at something from a different way, also how bloody persistent you are.”

Sanctuary Runners are thinking globally. There were plans in the making for a solidarity run at the Tokyo 2020 Olympics.

They have applied for funding through the European Commission with the Olympic Federation of Ireland, to set up groups in Milan, Stuttgart, Nicosia (Cyprus) and Bilbao. There is also lots of interest in the UK, Australia and America.

If you are interested in getting involved with your Sanctuary Runners at your local parkrun, you can find out more on the website here.