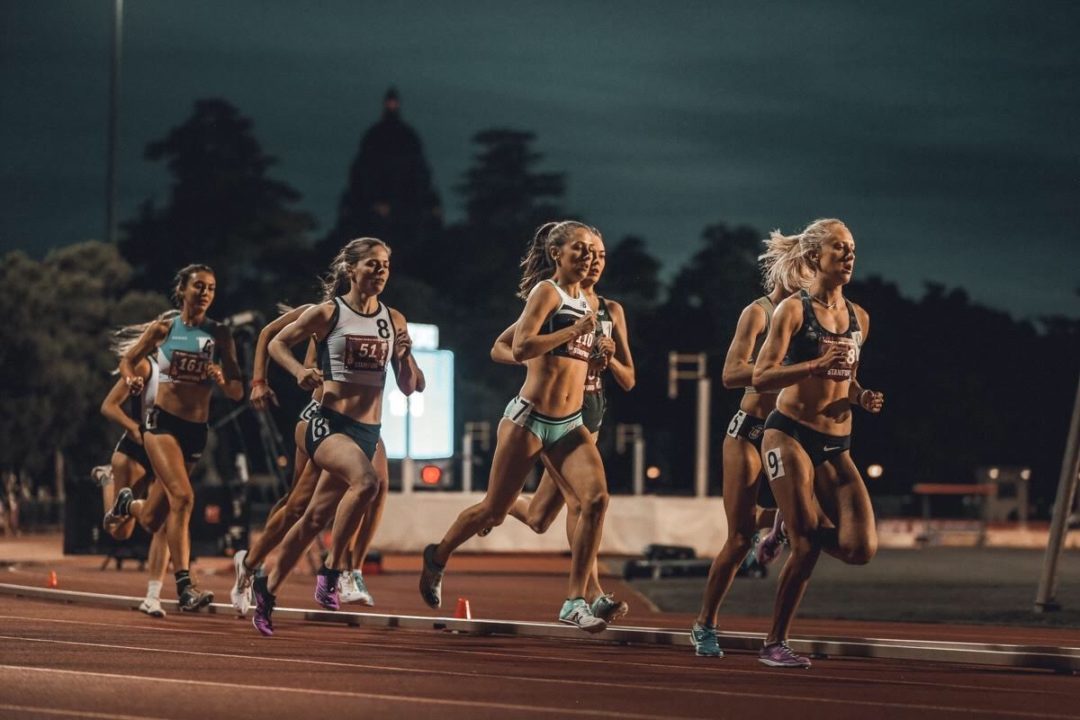 Fast Running’s Blaithin Sheil sat down with Síofra Cléirigh Büttner to talk about the experience of US collegiate running, the importance of communication and going professional after college.

Going to Villanova “was definitely one of the best decisions ever…it was important for me to learn how to race, because I didn’t know how to race before.” Síofra Cléirigh Büttner was used to winning easily in Ireland but in the US she learned “the art of racing”.

She watched back a race video with her coach, who asked “what were you doing?” “I was making a big jump to get into second place, then I’d fall back to fourth, then I’d move again.” She could have just chilled in fourth and moved later. That was the beginning of a big learning curve.

The DSD (Dundrum South Dublin) athlete graduated from Villanova University in May 2018. Career highlights include winning the 4×1500 relay and coming third in the DMR (Distance Medley Relay) at the Penn Relays in 2016 as a Sophomore, and doing the triple as a Junior in 2017, winning the 4×1500, the DMR and the 4×800, and an individual silver medal in the 2018 Indoors.

Going professional after leaving college in 2018 did not happen overnight, “It took a while to get going…I knew it would take a few months but I didn’t know it would take as long as it did.” She wanted to stay in the US as she felt there was better coaching and racing there. She started training officially with Team New Balance Boston in April 2019.

Her brother Fionn helped her out with coaching to keep her tipping over until she found a group. It was hard “not having a base and living out of a suitcase, but I had good friends and people that were looking out for me.”

At a meet in Boston last February she bumped into Katrina Coogan, a college rival but now valued teammate. Katrina suggested she reach out to her dad, Mark Coogan, who coached their group. So reach out she did. They were going to Flagstaff, Arizona for a camp so could not invite her to Boston for a visit, but Mark said if she could get herself to Flagstaff she was welcome to link up with them.

“I’m very grateful to her [Katrina] for offering that gateway.” She is a very kind person and Síofra noted “now that I know her a lot better, I’m not surprised, but I still really appreciate the fact that she did.” “The whole underlying vibe of the group is very laid back, our coach Mark is very laid back and he is very positive…he assists us in any way he can…but he also wants us to be independent at the same time.” The group train hard but are “not constantly thinking about athletics.”

This balance is important to Síofra, but is similar to the approach of her college team so it was not a massive shift in mindset for her. “Literally take a chill pill you know.”

What does she do when she is not training? The last few months have been hectic while getting set up, “the day just kinda gets away from you” between PT, training, gym, maybe a massage, “and then it’s already three o’clock somehow and now I have to go run again.” Some of her teammates babysit on the side or coach part time. They all hang out together regularly too.

One thing that stands out is that Síofra keeps referring to “the girls.” I asked how important it is to her to train with women. “When I was in secondary school, I only really trained with lads, we had a really good women’s team in DSD…but I kinda had a lot of lads that I would train with and I didn’t see any problem with that…I really enjoyed it…

But then when I went to college it was nice because you realise how many good females are over there too…it’s not even that there aren’t as many good girls here, but only recently have people, even the male side as well, people have become more open to training together in groups.”

The great thing about Mark Coogan is that “there is a good line of communication.” If someone feels sick or is carrying a niggle and wants to modify the the run, his approach is “you know your body best.” He says “the most important thing is if you are happy, you will be successful because you are not going to do well if you aren’t enjoying it, you’re going to resent everything. So I think that’s really refreshing.”

You go to practice, then you leave, “tune in, tune out.” There are very good vibes. The team all get on so well, there is no tension at all. Mark said one, “none of us are perfect, but we make a perfect group” because they all piece things well together and all help each other along.

It is interesting that they have such a chill vibe on the team, as some runners function in a different way. Some people thrive on a very busy schedule, work full time, have a family life and run very fast. Síofra made the point though that just because this relaxed atmosphere on the team works for her, doesn’t mean it’s the only way to be successful at running.

Many roads can lead to success

“This isn’t a holy grail of anything, sometimes that’s the issue in any sport, people are always thinking there is only one way to do something to get where you want to be but it’s all trial and error because you have to learn who you are yourself and what works for you.

The light hearted nature of the team means they joke around a lot, and that’s where Síofra got her Good Vibes Only slogan that features on her instagram. When the vibes are good they roll with it. It’s not about ignoring the bad times, but to use the slogan to ask themselves how can they bring a positive outlook to a situation that isn’t going so well. And then other times they just say it to “goof around.”

I mention an interview with Ann Mazur on the Lindsey Hein “I’ll Have Another” Podcast. She ran for Notre Dame alongside Molly Huddle and used to introduce herself as Ann from Notre Dame. She struggled with this when she left. Did Síofra experience similar?

“A lot of people talk about it when they retire. It’s such a big part of your everyday life when you’re in college…for me it became my second home.” When she left “it was very sad.”

“And the more time I spent on my own, because I’m a very social person, the more I was like, you know what, this is kind of shit… you go from everyday being with 15 girls training and then just being on your own, and it’s like, well, why do I do this again?”

When she got a chance with this new team, she said to herself “even if I go to Flagstaff and train with them and it doesn’t work out, I still got six weeks to train with these people and learn. I got something out of it, you know, it was a good shift in my perspective because I appreciated the support and what it gives a lot more.”

Athletics isn’t just about the times you run

And when she refers to what it gives, she doesn’t mean the running fast and success, she means the people. Athletics “is more about who you meet and the relationships you build rather than what you do.”

She recalls one time hanging out with her teammates, they were checking in with each other, especially the girls who were injured or struggling with other stuff. One of the girls asked Síofra how she was doing, and said they didn’t want to take away from the fact that she was doing well.

But Síofra responded that it wasn’t really about doing well for her, “when I die I dont to be on my grave just my PBs. Nobody cares about that. It’s more about what type of person they were, if they were good to their friends. That’s way more important.”

She learned a lot about herself in this respect in college. As Co-President of the Student Athlete Advisory Committee she worked on building a community across all college sports, rather than focusing on individual teams. “That was really important to me, we got the different sports supporting each other.”

This was the community that was sad to leave, but it seems she has found a similar community in Team New Balance Boston, with plenty of very, very good vibes indeed.