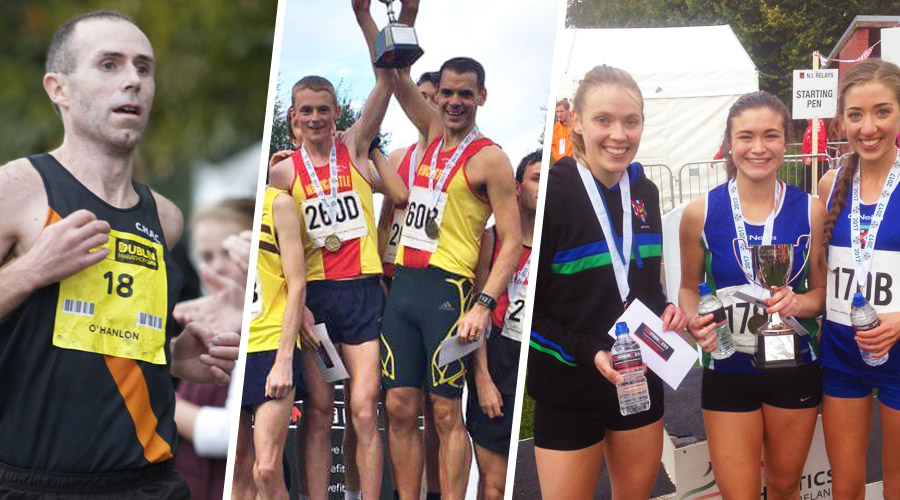 Olympic steeplechase Kerry O’Flaherty of Newcastle AC had led the women’s race after the opening leg, with Letterkenny AC’s Nakita Burke clear second. North Down and Ballymena were battling it out for third and Yasmin Wilson for QUB was fourth.

When it came to the second changeover, Letterkenny’s Maria Ni Mhaolaigh had taken over in front with Newcastle holding on to second place and QUB’s Sinead Sweeney not far behind for third.

Mitchell then took over for QUB and quickly moved into the lead. Her time of 10 mins 31 secs for the leg knocked 15 seconds off the course record and saw the team finishing in 34 mins 37 secs.

Noeleen Scanlon ensured that Letterkenny held on for second place in 35:15, while a strong leg from Jodi Smith pulled North Down AC into third in 36:38.

Just three seconds separated the top two in the men’s 4 x 3,380m with Newcastle AC holding off North Belfast Harriers for the title.

Springwell Running Club’s Neil Johnston had led on a closely fought opening leg with Dromore AC, Newcastle AC, North Belfast Harriers and City of Derry not far adrift. On the third leg, Patrick McNiff moved to the front for Newcastle AC after strong running from Eoin Totten and David O’ Flaherty on the opening two legs. McNiff handed over to Zak Hanna who brought Newcastle home in first place with a time of 39 mins 46 secs.

A fast leg from Mark McKinstry ensured second place in 39:49 for North Belfast Harriers, with City of Derry, anchored by Matt Doherty finishing third in 40:04.

Early leaders Springwell were just six seconds adrift for fourth. Running as guests were a team from Derry Track Club whose time of 412:51 would have put them seventh overall.

Retaining their women’s masters title for the third year was the City of Lisburn trio of Ann Terek, Diane Watson and Kelly Neely. Their time of 36:24 saw them finish over a minute ahead of Lagan Valley AC, thanks largely to a 11:31 split for Neely on the anchor leg. Beechmount Harriers, anchored by Catherine Diver, finished third in 37:35.

In a competitive men’s masters 4 x 3,380m, which attracted a massive 57 teams, Acorns AC had led at first changeover, marginally clear of Annadale Striders, Derry City and Ballymena Runners. Annadale took over in front on the second leg, before anchorman Vincent McAllister rescued it for Acorns AC on the fourth and final leg, bringing the team home in 43:15. Simon Murray ensured that Annadale Striders finished a close second in 43:22, with Willowfield Harriers third in 44:01. Full result can be found here.

O’Hanlon led the race from the start and finished in 1 hr 29 mins 15 secs. Second in 1:50.33 was Richard Gorman of Sligo AC, while third and fourth were Michael McMahon and John Dunne of Raheny Shamrock AC who crossed the line together in 1:52.04.

Pauline Curley of Tullamore Harriers finished 17th overall and first woman in 2:06.34. Hannah Carroll of Donadea RC was second in 2:10.45 and Tara Kennedy of Raheny Shamrock third in 2:11.51. A total of 1,166 finished the race most of them using it as a fitness test before the SSE Airtricity Dublin Marathon in three weeks time. Full result can be found here.

A total of 1,463 finished the race, with a further 1,110 taking part in the half marathon won by the American Brendan O’Donnell in 70:30. First woman was Adrianna Melia of Longford AC in 82:24. Leading home 309 finishers in the marathon was Kevin English of Tallaght AC in 2:48.54. Rachel Stokes of Kerry Crusaders was first woman in 3:09.35.

At the Simon 5-Mile Home Run in Dublin’s Phoenix Park, also on Saturday, Liffey Valley’s Peter Arthur beat DSD ‘s Patrick Mac Gabhann for victory in 25 mins 36 secs with nine seconds between the two. Fiona Stack of Raheny Shamrock made a welcome return to racing after a few years absence to finish first woman in 31:57. Full result can be found here.

Conor Duffy of Glaslough AC won the annual Run with Catherina 10km in Cavan on Sunday, October 8. McKiernan herself was first woman.

Preluding the main race, was the 4-miler and after her winning final leg in the NI & Ulster Road Relays for QUB on the day before, Emma Micthell made the short trip to Armagh to take the crown in the women’s race. Men’s result pending.