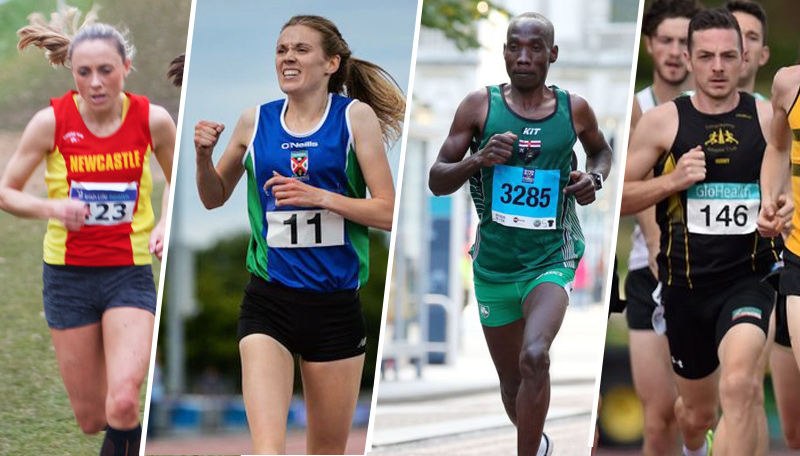 Favourites to win the senior women’s 3×3,380m is a strong QUB team led by the in-form Emma Mitchell backed up by Rebecca Henderson and Sinead Sweeney. Others in contention include Letterkenny AC with a team led by Ann Marie McGlynn, and Newcastle AC, led by Olympic steeplechaser Kerry O’Flaherty.

McGlynn is also scheduled to run for Letterkenny in the masters’ 3×3,800, along with Natasha Adams and Fionnuala Diver. They’ll take on the trio of Kelly Neely, Judith Lonnen and Anne Terek of City of Lisburn who set a new record when winning the title last year.

Gideon Kipsang leads the Derry Track Club team in a senior men’s 4×3,380m race that could come down to the wire. Also on the Derry team are Conan McCaughey, Shane McGowan and steeplechaser Adam Kirk-Smith. Rivals include a Letterkenny AC quartet led by Danny Mooney, Newcastle AC with Eoghan Totten and David O’Flaherty to call on; City of Derry led by experienced master Declan Reed, and North Belfast Harriers which includes Andrew Annett in its line-up.

Irish 3/4 Marathon – Sunday, October 8
With the Dublin Marathon just three weeks away on Sunday, October 29, many athletes are completing their preparations for the biggest day in the Irish athletics calendar.

A key race for runners of all standards is the Irish 3/4 Marathon, taking place at Longwood, Co Meath on Sunday. Last year’s winner by some distance was Clonliffe Harriers Gary O’Hanlon who recently ran a personal best 2:19:25 in Berlin and will turn out for Clonliffe in Dublin. Last year’s first woman was the evergreen Pauline Curley of Tullamore Harriers.

Westgaard has an Irish mother and aims to compete for Ireland at the Winter Olympics in South Korea next February. The skiers will set off ahead of the main body of the race.

Laura Graham of Mourne Runners is the woman to beat in the women’s race after winning the Bangor 10km in 34:35 last week. Earlier this week, Graham was one of 15 Ulster athletes nominated for next year’s Commonwealth Games following her 2:37.05 personal best at the Berlin marathon a fortnight ago.