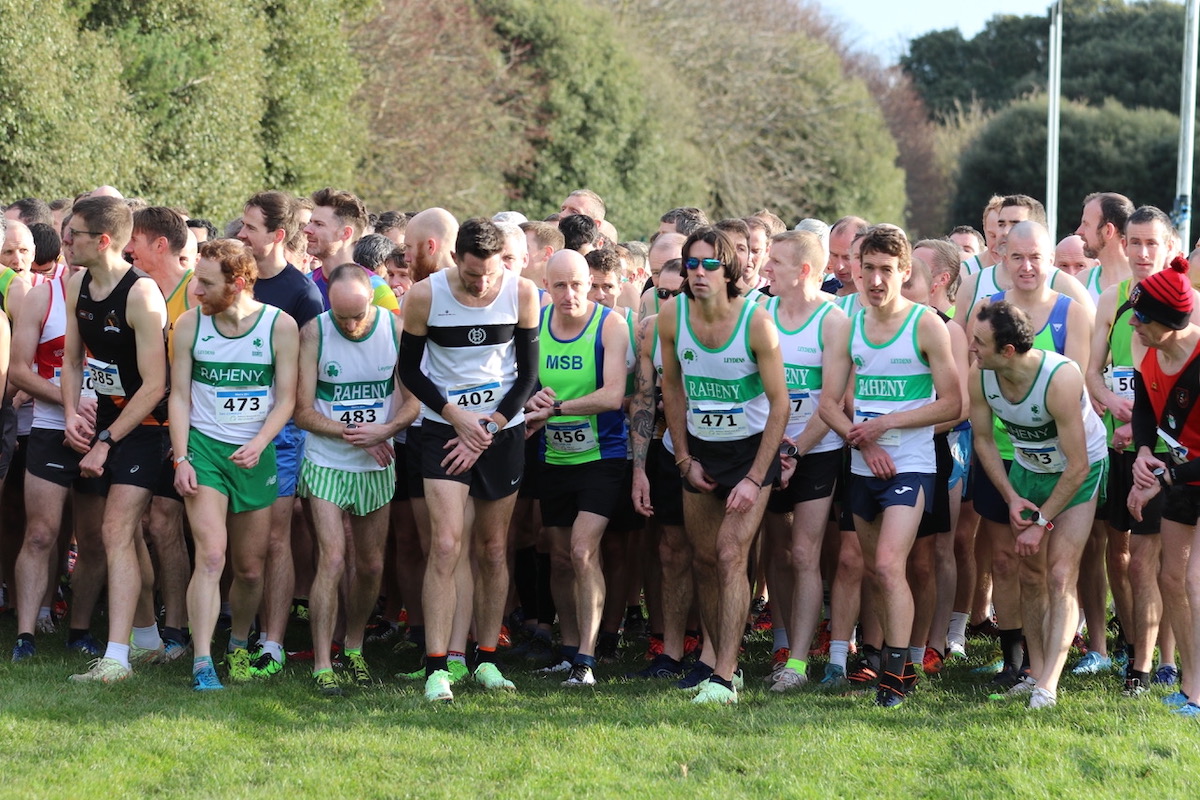 Lindie Naughton is back in from the mud and reporting on all the Irish action from this weekend.

On a busy week for cross-country, the Dublin Masters Championships in St Anne’s Park topped the list for entries with 460 finishers across four races and six titles on offer.

Of those six titles, host club Raheny Shamrock comfortably took four of them, starting with Annette Kealy who although now in the W55 age group, was a comfortable winner of the W50 race with a time of 12 mins 2 secs for the 3000m distance.

In the same race, Tom Loftus was first M65 in 12:47 although the Raheny team could only manage third place behind Rathfarnham WSAF AC and Clonliffe Harriers.

Next up was the men’s M50 race over 6000m, where Shane O’Neill of Rathfarnham WSAF AC pushed the pace from the start and was a clear winner by almost a minute in 21 min 56 secs. In the battle for second place, Kevin O’Connor of Dundrum South Dublin AC got the better of Arnaud Benjacar of Liffey Valley. In the team category, O’Neill led Rathfarnham WSAF AC to victory over Metro St Brigid’s AC and Dundrum South Dublin AC. After it was the turn of the W35 women where Raheny again finished on top thanks to a determined effort by Kate Purcell, who completed the 4000m distance in 15:07. She was followed home by her team mate Zoe Quinn who was also first W45. A close third was Caoimhe Kilroy of Metro St Brigid’s AC, while in fourth place Maria Jones was leading Sportsworld to a narrow three point team victory over Raheny, with Crusaders AC third.

Finally it was time for the M35 men where Raheny’s reigning champion Mick Clohisey defended his title in some style, finishing well over a minute clear of the chasers with a time of 20 mins 19 secs for the 6000m distance.

Louis McCarthy of Rathfarnham WSAF AC was second in 21:30, while for third place, Karl Nolan got home ahead of his Clonliffe team mate Tom Sherlock, with Cathal McHale also Clonliffe, in fifth place. Age group results for Raheny too

It meant that Raheny retained the Pat Hooper Cup as best overall club, presented for the first time last year in memory of the late great Pat Hooper. Pat was not only an Olympian, but a club man through and through and chairman of the Dublin Athletics Board at the time of his sudden death in October 2020.

Not just cross country in Dublin

In Trim, Ronan Moore of Trim AC and Mairead Hogan of Dunboyne AC were the individual winners at the Meath Masters’ Championships.

Clarecastle was the venue for the Clare senior championships, with a quality turn-out in the men’s race, where Irish international athlete Dean Casey of Ennis TC was the winner ahead of his clubmates Mark Hanranhan and Rory Chesser. Sharon Rynne of Kilmurry Ibrikane North Clare AC won the women’s title, with Anne Marie Connellen and Laura Healy, both Ennis TC, second and third. Ennis TC took both team titles.

In Cork, conditions were wet for the ESB BHAA 5km cross-country — the only cross-country race organised by Cork BHAA. Leading home 190 finishers was Barry Twohig of Emerald Fencing in 18 mins 31 secs. Guest runner Naoise O Flaitheartaigh was second in 18:51 and Donal Coakley of Gilead Sciences third in 19:23.

First woman in 21:01 was Michelle Kenny of the Department of Education. Anna Hogan of UCC was second in 22:14 and Ella Collins third in 22:44. In the men’s team categories, the Navy men won both A and B grades, with Apple winners in C. Of the women. UCC won A, Musgrave B and Complete Financial C. For its next race, Cork BHAA is back on the roads for the Dupont-IFF 6km on Sunday January 22 (11am).

A day earlier on Saturday (January 7), Craig McMeechan of North Down AC was a clear winner of the open 6km race at the Derry cross-country at the Thornhill College grounds.

McMeechan’s time of 20 mins 15 secs put him well over a minute clear of the chasers. In the battle for second place, Conal McCambridge of North Belfast Harriers just out-sprinted Chris McGuinness of Foyle Valley AC, with the pair timed at 21:34 and 21:35.

First woman was Angeline McShane of host club City of Derry Spartans in 26:15. Mari Johnston of Sligo AC was second in 26:28 and Sarah Bradley of Finn Valley AC third in 26:41.

In Tymon Park, Dublin, the Bank of Ireland BHAA 6km cross-country provided the race of the weekend, with Luke McMullan of RSA and Ross Collins of Central Bank battling out to the end. Only with the line in sight, did McMullen make a decisive move winning in 23 mins 2 secs; Collins finished two seconds behind.

Third was Michael Kiely of Nypro, while fourth and first woman was Laura Buckley in 23:43. Second woman was Laura O’Donnell, while third woman was guest runner Niamh O’Sullivan all the way from Co Kerry, who was also (unofficially) first W60. The much improved Buckley was a double winner, leading the Teachers women’s team to victory over Revenue. Teachers also won the men’s A grade, with Eir the winners in B, Accountants in C and Food A beating the Gardai in grade D. Next Leinster BHAA race, organised by Eir, takes place in Kiltipper Park, Tallaght, on January 21.

Merlin Park was the venue for the second round of the Galway Cross-Country Series with “long” (2-3 miles) and “short” (1-2 mile) course on offer. First home on the long course was Declan O’Connell in a time of 20 mins. First woman was Niamh Hennelly in 23:42. Winners of the short course were Ryan Byrne and Emily Bruton.

And a little bit of road

Paul Hartnett of East Cork AC and Jean Lacey were the winners of the Cloyne Commons 4km Series Round 3 in Co Cork on Sunday (January 8).

Conall McClean and Eskander Turki of Annadale Striders proved the class of the field in the 10km race at the Expleo Running Festival held on Monday (January 2).

First woman in 38:13 was Emma Mitchell of Clonliffe Harriers AC. Louise Smith of North Belfast Harriers was second and first W50 in 39:54 and Fiona McFall of Road Runners AC third and first W40 in 40:17.

With about two months to go until the European Championships in Turkey, indoor competition is stepping up with Irish athletes in action both at home in the opening round of the indoors league in Abbotstown and in Sheffield at the BMC Indoor Grand Prix on Sunday (January 8).

Georgie Hartigan of Dundrum South Dublin AC made her 3000m debut in Sheffield, where she finished fourth in the women’s race with a time of 9:36.55.