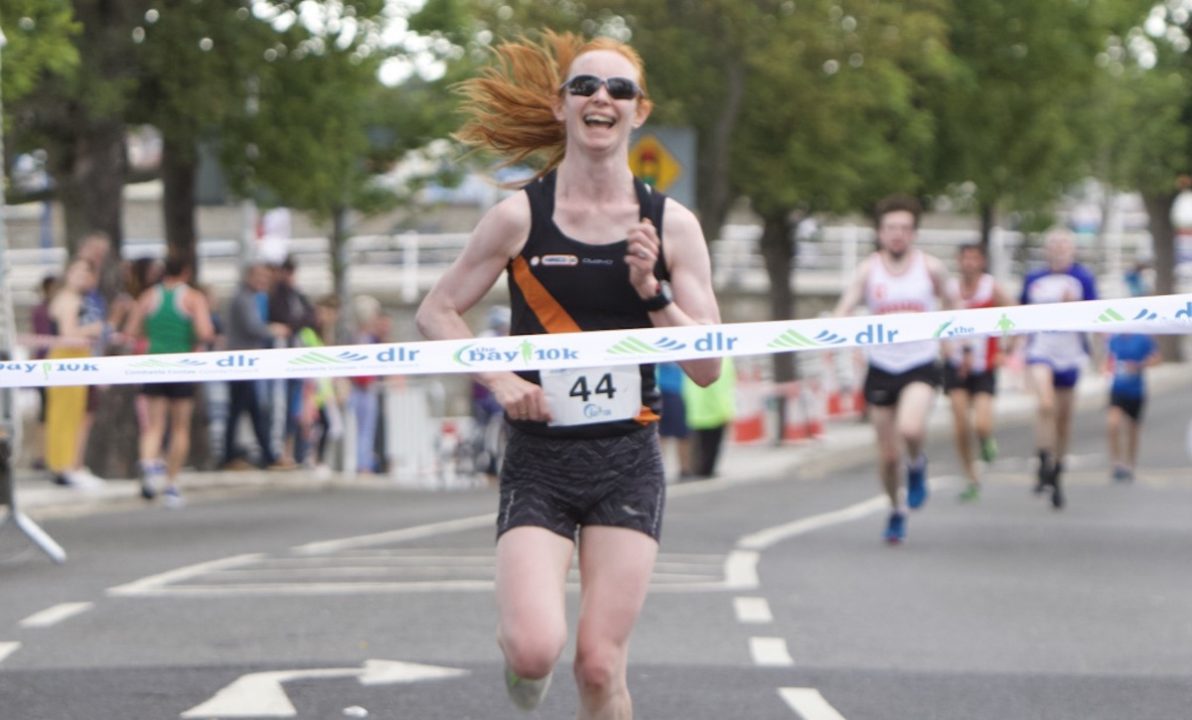 Ciara Mageean of City of Lisburn AC produced the performance of the day with a meet record of 2:02.40 when winning the women’s 800m at the Belfast International meet on Thursday (July 1).

Later in the evening, Mageean acted as a pacemaker for the 3000m. Winning the men’s 800m race was John Fitzsimons of Kildare AC in 1:48.19 – his quickest time so far this season and not far off his lifetime best of 1:48.09 set summer. Conall Kirk of Annadale Striders ran a personal best 1:49.13 for second while Mark Milner of Tullamore Harriers was third in 1:49.87.

Finishing second with a time of 11.69 in the women’s 100m was Ciara Neville of Emerald AC. Scottish athlete Alisha Rees was the winner in 11.57. Joan Healy, who has recently transferred to Leevale AC, was third in 11.81 and Molly Scott of St LOT AC fifth in 11.97.

In the men’s A 100m, Stephen Gaffney of Rathfarnham WSAF was third in 10.69 while Jason Smyth of Derry TC clocked 10.84 for fifth. Kerry O’Flaherty of Newcastle AC made a return to steeplechasing at the BMC meet in Birmingham on Friday (August 2) where she ran a time of 9:56.87 for fourth place.

Winning the Micheal Fearon and Kevin Marron 5km in Carlingford, Co Louth, on Friday evening (August 2) in an untroubled time of 14 mins 23 secs was Yared Derese of Carrick Aces AC.

Master athlete Paddy Hamilton of Slieve Gullion Runners was second in 15:03 and Conán McCaughey of North Belfast Harriers third in 15:09.

Continuing her comeback to racing after a long period of injury was marathon woman Laura Graham of Mourne Runners who finished first woman in 17:01. Jessica Craig of North Down AC was a close second in 17:04 and Niamh Devlin of Dundrum South Dublin AC third in 17:56.

In the M55 age group, David Clarke of North Belfast Harriers gave Tommy Hughes of Termoneeeny AC a rare beating; Clarke finished in 16:33 and Hughes in 16:40.

A trip from Dublin to Ringaskiddy outside Cork proved worthwhile for Hiko Tonosa of Dundrum South Dublin AC when he added €500 to his bank balance after setting a new course record at the Cork BHAA Novartis 5km on Wednesday (July 31).

On a warm and sunny evening, Tonosa, who had won the national 5000m title only three days earlier, clocked a time of 14 mins 31 secs to knock three seconds off Mark Hanrahan’s record. A distant second was Gavin O’Rourke of Eli Lilly in 16:28, with Nick Hogan of UCC third in 17.09. First woman was Carmel Crowley of Stockhealth in 1918; Crowley was also first W50. Linda O’Sullivan of Cope was second in 19:34 and Linda O’Connor of Musgrave third in 20.22. First wheelchair was Jerry Forde of the HSE, who now has 456 marathons to his credit.

A total of 356 completed the race. Next Cork BHAA race is the DePuy Synthes 4-Mile on August 7th, also in Ringaskiddy.

In the IMRA WMRA Long Distance Championships trial, for the event being held in Patagonia later this year, the women showed the boys how to get it done. Both Nicola Duncan and Angela Speight finished under the required qualification set, with 3:41 and 3:42 respectively for the Irish internationals. Becky Quinn was third.

None of the male runners could get under the 3:20 qualifying mark, although victory went to Gavin Byrne, who featured recently after smashing the Wicklow Round record. Second was Brian Furey, with Barry Hartnett in third.

IMRA Chairman Richard Nunan said that “Gav and Brian were no more than 50 meters throughout the race, with Gavin out sprinting Brian over the last 200 meters.” Sounds like an excellent race. Colin Maher of Ballyfin led home over a thousand finishers at the annual Bay 10km in Dun Laoghaire on Bank Holiday Monday (August 5).

Maher, who along with Paul Stephenson of Rathfarnham WSAF AC,had pushed the pace from the start, finished the hilly course in 31 mins 42 secs. Stephenson was second in 31:56 was, with mountain running specialist Killian Mooney of Dundrum South Dublin AC third in 33:16.

Ailish Malone of Clonliffe Harriers was first woman in 38:14 – a first win for a delighted Malone in some time. Sarah Baryga of Sli Cualann AC was second in 38.27 and Michelle Cox of Newbridge AC third in 39:02. The race included a mixed team category which was won by Sli Cualann AC from Sportsworld RC and Crusaders AC.