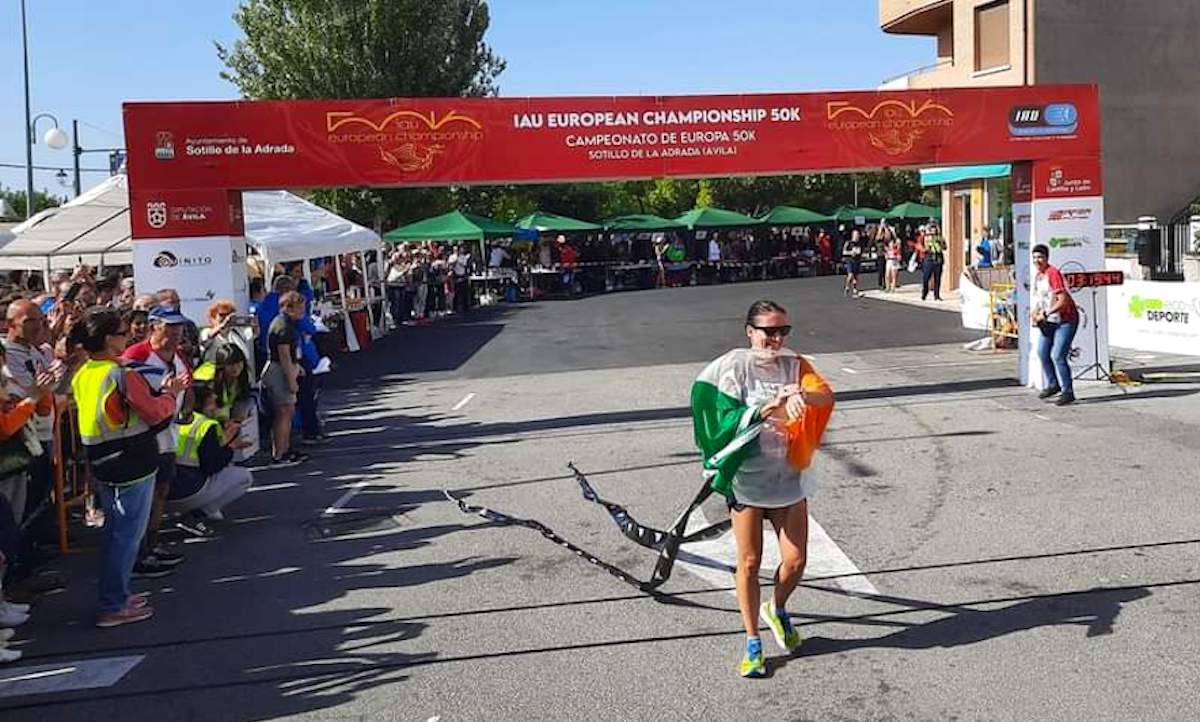 Another outstanding performance from Catriona Jennings adds to fine a 2022 for the ultra-distance athlete. Lindie Naughton brings you all the Irish action from this weekend.

Caitriona Jennings of Letterkenny AC was the winner of the inaugural European 50km Championships title in Avila, Spain on Saturday (October 8) with a time of 3 hrs 19 mins 42 secs.

Jennings had broken away from the pack midway through the race going through the marathon distance in 2:50.10. Also running was the current national 50km champion Sorcha Loughnane of Donore Harriers who was sixth in 3:36.46. It was a shame not to see a third counter for the Irish team who would have had a very strong chance of a team medal given how well Jennings and Loughnane ran.

A World 50km championships takes place every second year and will be hosted by South Africa in 2023. More 3/4 marathons than ever before

After a lovely sunny Saturday, autumn made itself felt at the Irish 3/4 Marathon held in Longwood, Co Meath, a day later (Sunday October 9).

With squalling winds followed by outbreaks of chilling rain, many of the runners must have wondered why they bothered getting out of bed that morning.

Times inevitably were slow — as they were in all the Sunday races- and it was two vastly experienced veterans who came out on top.

Many times previous winner Gary O’Hanlon of Clonliffe Harriers was adding another victory to his collection when finishing in 1 hrs 51 mins 33 secs while Barbara Cleary of Donore Harriers was the first woman in 2:03.59.

Second overall in 1:53.35 was Graham Gilshinan of Portmarnock AC a newcomer to athletics who, at 23 years of age, is half Gary’s age. Myles Gibbons of SBR Ferns, another experienced campaigner, was third in 1:54.26. Second woman was Isobel Oakes of Sligo AC in 2:04.34 with Grace Kennedy-Clarke of Donore Harriers third woman in 2:11.41. Not too far away in Grange Castle, Dublin, Gavin Kelly was the winner of the Fastline 3/4 Marathon with a time of 1 hrs 58 mins 52 secs. A close second in 1:58.59 was Terence Shanley of Clane AC. First woman was Carmel Ward of Raheny Shamrock AC in 2:14.08.

Also taking place were half marathon and 10km runs. Peter Thompson of Victoria Park and Connswater AC in 74:28 and Jill Horan in 88:18 were the winners of the half marathon, while coming out on top in the 10km were Damien Hilliard in 37:40 and Sharon Kiely in 38:59.

Tarmonbarry in Co Roscommon was the venue for a third 3/4 marathon on Sunday and the winner here was Peter Somba of Dunboyne AC who finished in 1:51.56 — marginally slower than O’Hanlon’s time in Longwood. Second in 1:52.29 was Barry Shiel of Longford AC while third in 1:54:12 was Patrick Sharkey of Longford AC. First woman in 2:25.37 was Theresa Hughes of Athlone AC, with Sarah Keane of Abbeyknockmoy RC second woman in 2:27.02 and Maria Maher of Ballyskech AC third in 2:28.58.

In a close finish to the Armagh 10-Mile, Eskander Turki of Annadale Striders beat Gary Crummy of Newry AC with just five seconds separating the two. Turki finished in 51 mins 22 secs and Crummy in 51:27.

Third in 52:26 was Birhane Gebrebrhan of Annadale Striders while fourth in 52:34 was Tudor Moldovan of Clonliffe Harriers recent winner of the Eco Trail 30km in a new record time. Annadale, with four in the top eight, was the winning men’s team.

Making it an Annadale double was Robyn McKee who finished first woman in 60:13. Second woman and first W45 was Gladys Ganiel of North Belfast Harriers in 60:22, while third in 65:03 was Dearbhla Cox of Annadale Striders.

Over the shorter distances, Keith Kelly of Youghal AC in 16:45 and Clare McCarthy in 17:38 were the winners of the Douglas Credit Union Charity 5km held in Cork, with conditions as unforgiving as they were elsewhere in the country.

A day earlier, on Saturday (October 8), Daire Comer of Dublin Front Runners was the winner of the Céide Coast Half Marathon Coastal Challenge, in Ballycastle, Co Mayo with a time of 83 mins 18 secs. First woman and first W50 in 92:19 was local athlete Colette Tuohy of Mayo AC. In the 10km race, Alan Holmes of Westport AC in 38:58 and Edel Gildea in 47:08 were the winners.

* As a mark of respect to those who died and were injured in the tragic Creeslough gas explosion, all Donegal races were postponed at the weekend. How bad do you want it? Photo: Lindie Naughton

A crashing finish to a superb men’s 6km proved the highlight of the Dublin Novice Cross-County Championships, hosted by Sportsworld Running Club in challenging conditions at Tymon Park on Sunday (October 9).
After much debate over the exact location of the finish line — under the clock or at the start of the timing mat? — Shane Spring of Raheny Shamrock AC  and  ex-boxer Eddie O’Connor, a recent recruit to Brothers Pearse AC, were declared joint winners after they — literally — fell over the line together in a time of 19 mins 30 sec.
A close third was Clonliffe Harrier Ben Coughlan  who had had stuck with the winning pair until the later stages of the race.  With Conor Deane sixth, Alex Cunningham seventh  and Karl Ennis 15th , Brothers Pearse took a memorable team gold.
Clonliffe was second and Crusaders AC third. Slightly less exciting was the women’s 4km, where Faye Dervan, now in  Dublin City Harriers colours after transferring from Tallaght AC,  was the winner in 15 mins exactly.  Behind her, Aoife Coffey of Lucan Harriers was a fighting second in 15:08. A clearer victory in Ballynoe

Backing up the scoring four was one Paul O’Donovan in 12th place. O’Donovan is perhaps better known as an Olympic rower of some renown. St Finbarr’s AC finished second and Cork Track AC third.

Siobhan Hoare of Togher AC was first home in the women’s 4km with a time of 17:19. Second in 17:30 was Noémie Leduc of Grange/Fermoy AC while third was Maeve Ahern of Cork Track AC in 18:01.With four in the top eleven, St Finbarr’s won the team title ahead of Togher and Cork Track.

A day earlier in the Meath Intermediate Championships at Navan Adventure Centre, Holly Brennan of Cilles AC proved the class of the field when winning the women’s race in 15 mins 4 secs. In second place, Mairéad Hogan, winner of the novice title a week earlier, was again leading Dunboyne AC to team victory, backed up by Claire Ní Fhaircheallagh fourth and Clodagh Dunphy fifth. Trim AC was second and Navan AC third.

Ben Brunton of St Brigid’s AC was an equally clear winner of the men’s race finishing in 29 mins 25 secs with Trim AC, led by Tom Feeley in third place, the team winners.

Catch-up: At Newcastle West on Sunday October 2, Niall Shanahan of An Bru AC, won his third Limerick senior cross-country title in a row having opening a gap of over a hundred metres on the first of five laps. Second and third were Karl Lenihan and Declan Guina who were helping

West Limerick AC to its fourteenth county team title with the club’s B team finishing second. Retaining her title in the women’s 8km race was Emerald AC’s Sophie Moroney, who fought off a challenge from Dooneen AC’s Sinead McDermott on the last lap. With Emer O’Mahony finishing third, Dooneen AC was first team.

Back in style last Wednesday (October 5) was the Brother Schools Cross-Country hosted by Clonliffe Harriers not as its usual venue of Santry demesne, which is currently unavailable, but at the Trinity sports grounds on nearby Santry Avenue.

Over a hundred turned out for both intermediate races, where Laoise Conaghan of Loreto Dalkey was the winner of the girls race ahead of Sophie Dooley from Muckross and Mya O’Reilly of Dominican College Griffith Avenue. Muckross took the team title. In the boys’ race, Finn Diver of St Malachy’s in Belfast finished clear of Tom Breslin from St Aidan’s CBS and Matai Ursachi of St Paul’s Raheny.

Numbers were low in both senior races, with Cliodhna Ryan of St. Dominick’s Cabra best of the girls and Jonas Stafford of East Glendalough finishing well clear of Belvedere’s Thomas Bolton and Lorcan Benjacar of Ard Scoil Ris in the boys’ event.

Junior winners were Sholah Lawrence of Our Lady’s Greenhills and the Loreto Stephen’s Green team of the girls, and Michael O’Leary of Oatlands and the St Malachy’s team of the boys.

As usual, the minor events attracted the largest numbers. Tara Rose Smith of Sutton Park led home 175 finishers in the girls’ race where Loreto Foxrock were the team winners. In the boys’ race, with a similarly large entry, the winner was Belvedere’s Charlie O’Neill, with St Colman’s Newry the team winners.

Efrem Gidey of Clonliffe Harriers AC, running in Team Hoka colours, won the 4 Mile de Wedstrijd in Gromingen, the Netherlands on Sunday. After breaking away from the pack at half way, Gidey finished in a time of 17 mins 51 secs.

Running at the Notte delle Stelle in Italy on Friday (October 8) were Olympic steeplechaser Michelle Finn of Leevale AC and middle distance specialists Andrew Coscoran of Star of the Sea AC and Paul Robinson of St Coca’s AC.

Best of the Irish at the Chicago Marathon on Sunday (October 9 ) was John Kinsella from Co Limerick, who finished fourth M40 in 2:26.06. Irish mountain running international Zak Hanna of Newcastle and District AC closed out his season in Italy on Saturday (October 8) with a fifth place in the Chiavenna-Lagunc Vertical Kilometre Run – one kilometre in height over a distance of 3,298m.

Hanna’s time of 32 mins 38 secs was enough to see him placed third place overall in the World Cup Series.

Cross country returns and relay win for Harriers
The cross country is back! – Irish round-up