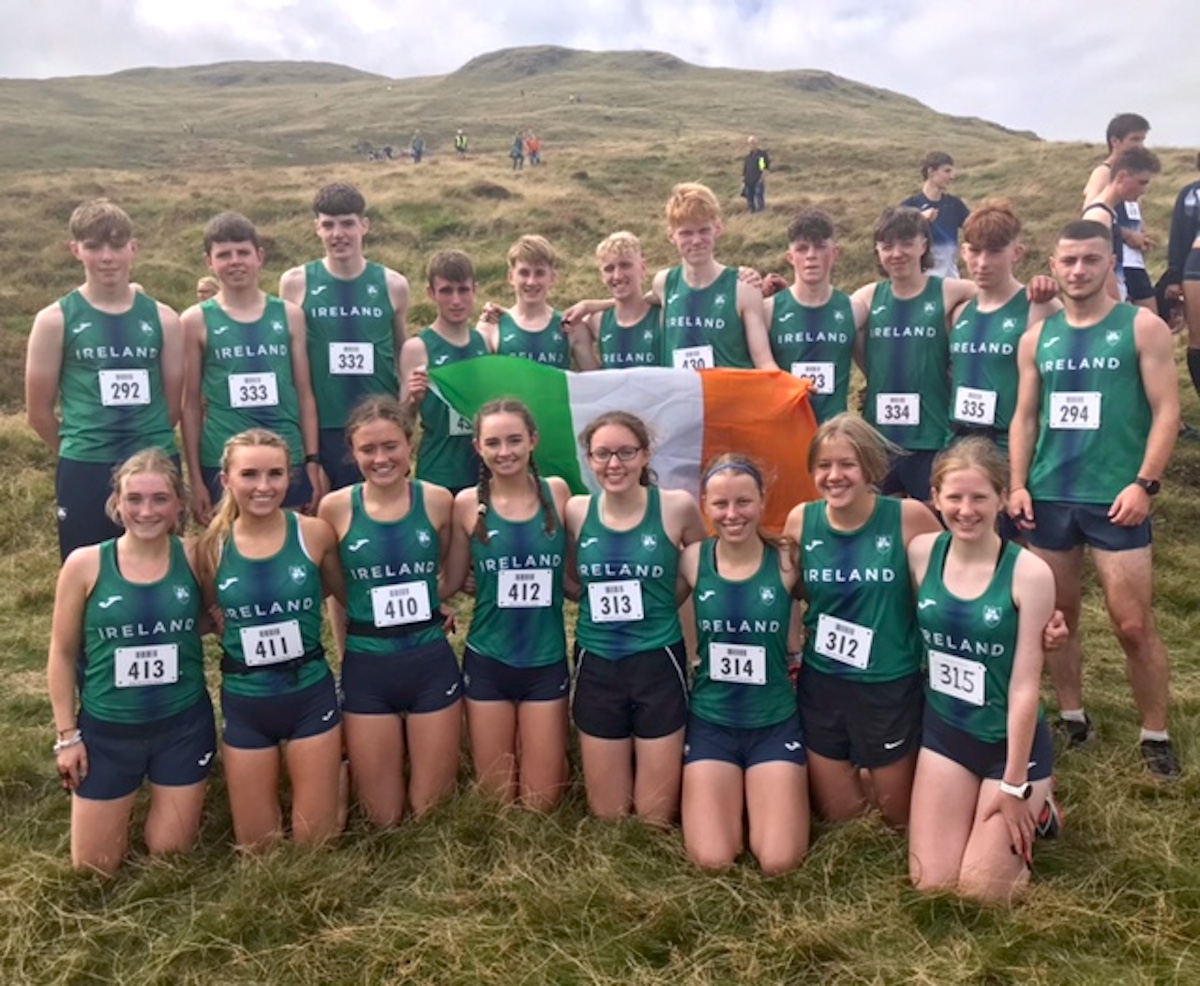 A total of 547 athletes competed at the National Masters’ Track and Field Championships held in Santry on Sunday (September 6) making it the biggest athletics meet of the season.

In the women’s 3000m, 2008 Olympian Maria McCambridge of DSD AC proved the class of the field, breaking away on the first lap and crossing the finish line in 10 mins 02.04 secs.

Most impressive performance in the women’s 800m came from Annette Quaid of Leevale AC who won the W40 race in 2:10.98 — the fastest time of the day.

Closest finish came in the W55 800m, where former Irish international 400m runner, Patricia O Cleirigh, beat her Raheny Shamrock clubmate Adrienne Atkins by thewidth of a thread. The pair were timed at 2:45.97 and 2:45.98. Atkins went on to win the 1500m later in the day.

Oldest competitor was M85 Pat Naughton of Nenagh Olympic, a championships regular for over forty years, who lined out in the100m

Glen Runners made it a double at the Run NI Birthday 5km from the Mary Peters Track in Belfast on Sunday (September 6). Kevin O’Boyle was the overall winner in a time of 18 mins 1 sec and Paul McCarthy first women in 20:33.

Dylan Sloan and Lucy McDermott were the winners of the Fintona 5km on Saturday (September 4). Their times were 18:16 and 21:49. Also on Saturday, Eoghan McElhinney of Bantry AC was the winner of the Glengarriff 5-Mile in 29 mins 28 secs. Hannah Steed of Clonmel AC was fifth and first woman in 31:29.

In Esker, Co Galway, David Patrick Carter of Galway City Harriers AC was the winner of the East Galway AC 5km on Saturday (September 4) in a time of 16 mins 9 secs.

Prolific racer Gary Scully of Nenagh Olympic was second and first M40 in 16:29 and David Bohan of Galway City Harriers third in 16:34. First junior was David Hillary of Caltra and District AC in 17:51 . First of the women was Aine Kenny of Crusaders AC in 20 .00; Monika De Almeida was second in 20:20 and Lisa McGrath third of Ennis TC third in 21.04.

On Friday evening (September 3), a number of road races were taking place all over the country. In Co Cork, Tim O’Donoghue of East Cork AC was a clear winner of the Cloyne 5km in 14 mins 43 secs. Second and first M40 in 15:31 was John Meade of St Finbarr’s AC, with Leevale’s Bernard O’Hanlon in third place given the same time.

In Portrush, David McAfee was first home in the North Coast 5km finishing in 19 mins 21 sec. First woman was Orla McCambridge in 24.42. Winner of the 10km in 35:25 was Jack McCausland. First woman was Martina McMullan in 41.29.

Winner of the fourth and final Roscommon Harriers AC 5km Series was Feidhlim McGowan of North Sligo AC in 15:25. Ray Hynes of Donore Harriers was second in 15:36 and Gary Scully third and first M40 in16:52.

On the final day of the Paralympics Games in Tokyo, Patrick “Pa” Monahan from the Le Cheile club in Kildare, finished 12th in the wheelchair marathon — an improvement of four places on his result in Rio. Monahan’s time was 1 hr 3 mins 54 secs. Winner was defending champion Marcel Hug of Switzerland in 1:24.02.

“I was the most nervous I’ve ever been before a race because I hadn’t raced in two years. You’d be doubting yourself and it’s tough being on last but I’m happy with that, it was a decent pace,” said Monahan.

“It’s getting harder to get here, it was a very small field, so it’s a privilege to be here and hopefully I’ve inspired a few people at home to pass me out fairly quickly.”

Sarah Healy of UCD AC produced the track performance of the week when setting a new Irish Under 23 record of 8 mins 52.63 secs for 3000m at the Palio Citta’ della Quercia meet in Rovereto, Italy on Tuesday (August 31). Healy finished sixth in the race.

Behind her, twin sisters Roisin and Eilish Flanagan, newly recruited to Dongal club Finn Valley AC, both broke nine minutes. Roisin was 11th in a personal best time of 8:57.79 and Eilish 12th in 8:58.46. Race winner in a personal best 8:39.95 was Russian “authorised neutral athlete” Svetlana Aplachkina.

Andrew Coscoran of Star of the Sea AC won the men’s mile at the at the Miglio Internazionale in Milan, Italy, on Saturday (September 4) clocking a personal best time of 3:55.61.

Coscoran was pushed hard by Belgian athlete Stijn Baeten who finished second in 3:56.03 and by Osama Zoghlami of Italy a close third in 3:56.06

At Silesia Kamila Skolimowska Memorial in Poland on Sunday (August 5), John Travers of Donore Harriers finished tenth in 8:09.11. “Not a great show of my ability. Got out hard but paid the price over last two or three laps,” said Travers.

Luke McCann of UCD AC finished a fighting second in the men’s 1500m with a time of 3:40.47 at the Meeting National à thème d’Halluin in St Denis, north of Paris, on Wednesday (September 1) . In the women’s 800m, Katie Kirk recorded her ninth win of the season, pipping Jemma Bromell of Emerald AC. Kirk’s time was 2:02.11 with Bromell clocking 2:02.47.

At the Swiss U23 Championships at Nottwill over the weekend, Simone Lalor of LAS Old Boys Basel won her heat of the 800m in 2:19.81 on Saturday and finished a close fourth in the final a day later in 2:10.97. After moving up from the shorter sprints this season, Lalor ran a personal best 2:07.53 at Thun in Switzerland last June.

Yes – cross-country is back and in the USA, a flurry of early season pipe-openers took place on Friday (September 3).

The college championships season begins at the end of October.

Zak Hanna, representing his Italian club, US Malonno, finished fourth at the Vertical Nasego in Italy on Saturday (September 4).
He followed that up with a 19th place in the Trofeo Nasego a day later, clocking a time of 1 hr 46 mins 15 secs for the 21km race with 1200m of climb.

Ireland’s Paul Tierney was also in action in the vertical kilometre, as a final tune-up before the 330km Tor des Geants, that starts next Sunday. When asked about the joys of running up 1000m vertical metres as quickly as possible, the big man told us it was “Genuinely one of the lowest points of my running life”, but we’ll ask him again at 200km into the Tor next week. It’s likely Tierney was unable to enjoy the stunning views, as VK running mainly involves staring at the ground 30cm ahead of you the whole time. Photo: Marco Gulberti

Reigning women’s World Cup champion Sarah McCormack made a welcome return to racing to finish ninth in the women’s Trofeo race in 1:58.19. Grayson Murphy of the USA was a comfortable winner of the race in a course record time of 1:45.56.

Best of the Irish at the World Masters Mountain Championships in Telfes Austria was Gerard Maloney of SBR AC who took M60 silver.

Winning the Maurice Mullins 44km Trail Ultra to and from Glencullen in Co Wicklow, was Barry Minnock, who was followed home by Rory Burke and Rory Campbell. Becky Quinn was first woman, with Patricia McLoughlin and Daniela Lubiscakova second and third.

England took gold in both races, as well as in the two U17 events.