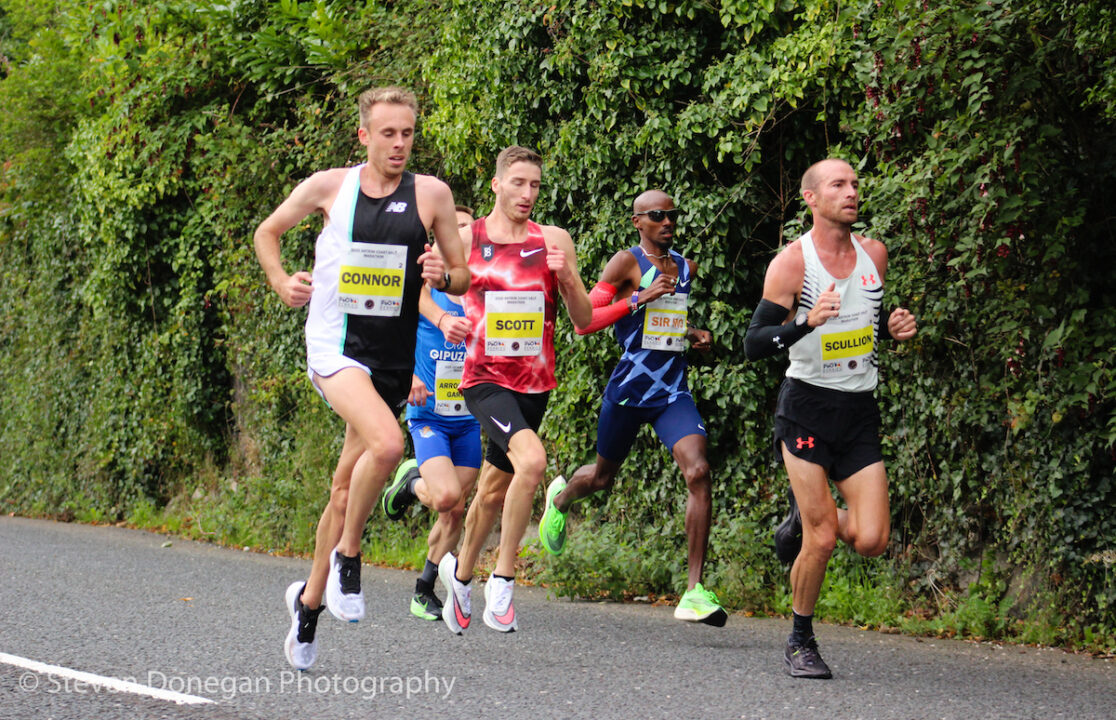 It was the half marathon distance that gave the biggest with some runners focusing on the shorter distance before running marathons, virtual, elite or otherwise, later in the autumn.

The Antrim Coast Half Marathon already featured in our Sunday round-up, where Irish marathon champion Stephen Scullion, of Clonliffe Harriers and Northern Ireland, took two minutes off his half marathon PB with a time of 61 mins 08 secs for fourth place and a new Northern Irish record on Saturday (September 12).

Winning the over 60 class was Tommy Hughes of Stripe AC in a time of 71 mins 9 secs, which is a new age group world record.

In the women’s race, Jessica Craig of North Down AC in seventh place finished best of the local entry in 75 mins 45 secs; a week earlier, Craig had run 16:18 for 5km at Down Royal. Finishing eighth in a personal best time of 76:25 was Ciara Hickey of Brothers Pearse AC in Dublin, while tenth and second W40 was Gladys Ganiel of North Belfast Harriers in 78.12. Mick Clohisey of Raheny Shamrock was the winner of an elite only Charleville Half Marathon held in Co Cork on Sunday (September 13).

On a day of blustery winds, Clohisey, who will run in the 40th anniversary London Marathon elite race on Sunday October 4, finished in 65 mins 10 secs. Jake O’Regan of St John’s AC was second in 65:40 and Hugh Armstrong of Ballina AC third in 66:31.

Breege Connolly of City of Derry Spartans was first woman in 77:28 followed by Ide Nic Dhomhnaill of Donore Harriers in 78:36 and Mary Mulhare of Portlaoise AC in 79.51. A total of 73 finished the race; full results here. Ciara Mageean at the Mid-Cheshire 5k earlier in the year Photo: www.mickhall-photos.com

Also in Berlin, in the stadium where he had won his European bronze medal two years ago, Thomas Barr of Ferrybank AC finished fourth in the 400m hurdles in 50.41 secs. On Friday, at the PTS Meeting in Samorin, Slovakia on Friday, Barr had gone a marginally faster 50.30 secs.

Irish champion Michele Finn of Leevale AC finished 11th in the women’s steeplechase in Berlin with a time of 9 mins 53.50 secs – well off the 9:38.04 she ran while in Australia last February and her 9:41.62 effort in Espoo Finland a month ago.

Nadia Power of Dublin City Harriers AC improved her 800m personal best to 2:01.01 when finished finishing third in Rovereto, Italy on Tuesday (September 8). The time was an Irish U23 record. Power took over a second off her previous best of of 2:02.39,

Three days later, in Samorin on Friday, Power finished third over the same distance with a time of 2:02.12. In the same race, Claire Mooney of Naas AC ran a season’s best 2:05.64.

On the same night in Poznan, Poland, Nessa Millet of St Abban’s AC put herself top of the current Irish rankings with a time of 57.44 secs for fourth place in the 400m hurdles.

Closer to home, England-based Kevin Moore of Dundrum AC in Co Tipperary, ran a hand-held time of 8:24.9 for fifth in the elite 3000m at the Highgate Harriers Middle Distance Open in London’s Parliament Hill on Wednesday (September 9).

Nakita Burke of Letterkenny AC underlined her current good form when winning the women’s 5000m at the NI and Ulster Track and Field Championships held at the Mary Peters Track in Belfast on Friday and Saturday (September 11-12).

Burke’s time of 16 mins 58.76 secs saw her finish comfortably clear of Grace Carson from Mid-Ulster AC in 17:07.03 and Olympic steeplechasere Kerry O’Flaherty of Newcastle AC in 17:13.56.

Two 800m championships bests were posted at the final day of the All Ireland National Junior Championships in Santry on Sunday (September 13).

In the women’s race, Amee Hayde of Newport AC, who had taken the 1500m a week earlier, was a comfortable winner in 2:08.43 knocking half a second off the previous record. Louis O’Loughlin of Donore Harriers then set a new best time of 1:50.93 when winning the men’s title.

Over 3000m, Tadhg Donnelly of Drogheda and District AC had over five seconds to spare when taking the title in 8:34.15. In second place was Abdel Laadjel of Donore Harriers in 8:38.52, with Dean Casey of Ennis TC third in 8:47.32.

St Catherine’s AC attracted a strong entry for the East Cork Championships at Conna on Sunday (September 13) where Kevin O’Brien and Fiona Santry made it an East Cork AC double.

Second was Linda O’Sullivan of Watergrasshill AC in 16:21, while third was Sinead O’Driscoll of Midleton AC in 16.27. Carraigh na bhFear beat Wateregrasshill AC to win the senior team category by two points, with East Cork third; Watergrasshill were first of the W35 teams and Ballymore Cobh best in the W45 category, with Sonia O’Sullivan the team’s first finisher in tenth place.