Good lines on the Wicklow Round – Gavin Byrne interview 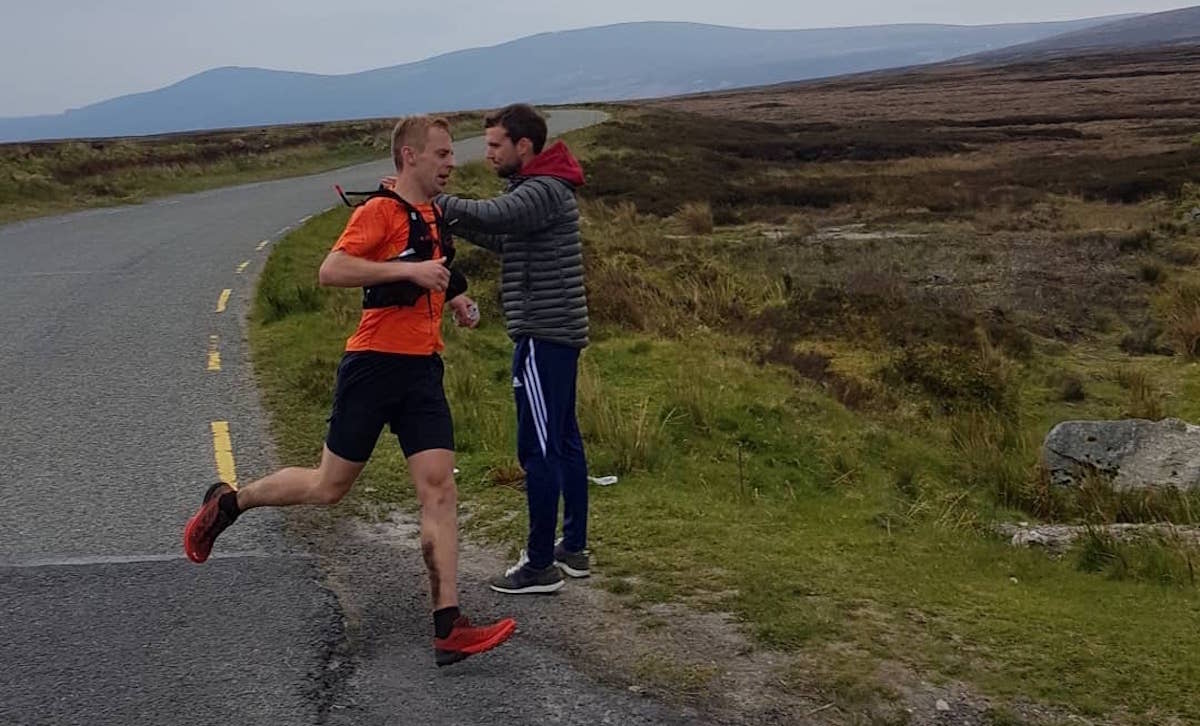 Wicklow Rounds record breaks are like buses it seems, with the third new mark of 2019 set by Gavin Byrne just two weeks ago.

Dublin based Gavin Byrne has represented his country at the IAU World trail champs and won Irish ultras such as the 200km Kerry Way Ultra and the Glendalough Clover in the past, but had made the Wicklow Round his focus for the start of 2019.

It wasn’t until Joe “Stringbean” McConaughey, a US runner who holds the record for the 2190 mile Appalachian Trail of 45 days, 12 hours and 15 minutes, broke the record in May 2018 that people started thinking of sub 17 hours. Stringbean ran 17:09:44.

Three in a row

Then it happened. US-based Irishman Paddy O’Leary, a former international lacrosse player, fancied a crack. The North Face athlete practiced by getting lost in his local California hills and came over in April to run 16:27:20. Eight days later the record was all gone.

Orienteer Shane Lynch ran 16:23:32, taking just under four minutes from the mark. O’Leary had been record holder for just over a week and no talk was of someone running under 16 hours for the round. Lynch did get to hold onto the record for a little while longer than O’Leary, but not by much.

Just under a month later Gavin Byrne smashed it out of the park. Having the pleasure of Byrne’s company for part of my Wicklow Way recce before his attempt, he was quietly confident that he had some good lines, ones that he felt could make the record possible. [Good lines means more direct routes between the 26 mountain tops, as runners can pick their own route as long as they go to every summit].

Throughout the day updates actually came through from O’Leary’s Instagram, the same for Lynch’s run too, as the community aspect of the Round means that everyone is supporting each other. Byrne had an excellent day that just kept going to plan and chipping time away from the splits of the others. His 15:04:30 skipped the sub 16 discussion altogether.

Now Fast Running caught up with Bryne and asked a few questions about his grand day out in the hills. Fast Running: Well done on your new record on the Wicklow Round, how was it?

Gavin Byrne: It was great! I had a perfect day for almost all of it. Just a little foggy in one section at 8am between Oakwood and Table mountain. After that it cleared up and I had sunny blue skies, cooled down in the evening time nicely which helped me keep pushing right to the end.

Fast Running: Why do you think you were able to take so much time off the previous mark.

GB: I suppose the main reason would be I put a lot of effort into recces, I probably spent 100’s of hours on the route over the last year since Joe (The Stringbean) broke the record, running and walking around the looking for the faintest of deer, sheep or hiking tracks.

So it helped knowing the route so well, that also conditioned my legs and ankles for the rough ground. I’m definitely not as fit or as fast as I could be but that didn’t matter.

FR: So you trained specifically for the round? What else really helped?

GB: Yes I suppose I did. My knowledge of the route helped and not having to take out a map because it was a clear day. I did have a sheet of notes and bearings to get me around. Also having a crew for the first time ever helped, just to fill bottles and hand me whatever I need. They did a top job! Plus at every crossing there was someone new to cheer me on, which was nice.

I’ve never really fuelled correctly during an ultra but this one I did. I mainly used high5 energy drink and energy gummies(both for the first time ever). Breaking the number one rule of using nothing new I suppose. High5 was great! Wouldn’t mind them on my side in future.

Plus used I Clif bloks and Cadbury’s mini rolls and fudge bars. Fueling well definitely helped, normally i just wing it, but not this time.

FR: Were there any low points, how did you get through them?

GB: Strangely enough no there wasn’t, not one!

I’ve had poor runs before but this one was perfect. As the hours went by I just got stronger and stonger. I wasn’t chasing anyones’ splits. I had noted Paddy’s and Shane’s previous record at certain points, but they weren’t targets. I was there to run at my effort level and feel, which worked a treat!

FR: What about the shoes on your feet?

GB: I used an old pair of Salomon Elevate for the first 12 hours then switched to Salomon Sense 6 SG. I had serious foot issues in a 200k trail race in Kerry before after I got soaked feet, so I didnt want that again. I wouldn’t recommend the Elevate for this challenge, they’re too soft! That pair have been retired since the Round.

FR: Any tips for anyone else doing the round?

GB: Picking a nice day helps a lot. I crewed for Paddy O’Leary on the April 13th and the weather was brutal! I don’t know how he finished, it was really cold and extremely windy, don’t think it rained though.

Also remember to just enjoy it. Logistically, it will help a lot to get a few recce’s done. That’s if it’s possible for you. If you’re aiming to break the record or just complete under 24hrs, knowing the ground and having an idea of where you’re going can really help.

Happy to help someone out if I can with questions or whatever.

FR: How are you feeling after the challenge?

GB: No serious issues in anyway, I was walking normal enough the next day.

Just the usual fatigue after an ultra, tight muscles and out of breath after a light 300m jog, not sleeping properly and waking at random hours. Knocked out an easy 10 miler on Thursday after it, felt rough at the start but okish at the end.

FR: Anything you’d do differently if you went again?

GB: I hate saying it but no. I feel everything went to plan on the day.

GB: Well the big one is the TDS in August. That will be my first time in the Alps so can’t wait see how I fair out over there.

I’m down to run the Wicklow Way this weekend but I’ll see how I am nearer the day. [Turns out Gavin will be starting this weekend, so hopefully I’ll hear all about the Round there – Robbie]

FR: Last question, do you reckon sub 15 is posssible?

GB: Definitely! I’m no where near the fastest mountain runner around, I just put the work in for this event, everything went perfect and I got the result. I think I could probably run a sub 15 if everything went as well as it did again. Kind of hoping someone runs 15.01, so if I go back again the target will be sub 15.

Gavin can be followed on Instagram and Strava and hopefully will be running the Wicklow Way next weekend so I can ask him a wee bit more about his Wicklow Round record. If you know anyone at High5 then tell them to get in touch.

Sexton ends domestic career with impressive double – Irish weekend round-up
What would you do with a year off work to focus on your running?