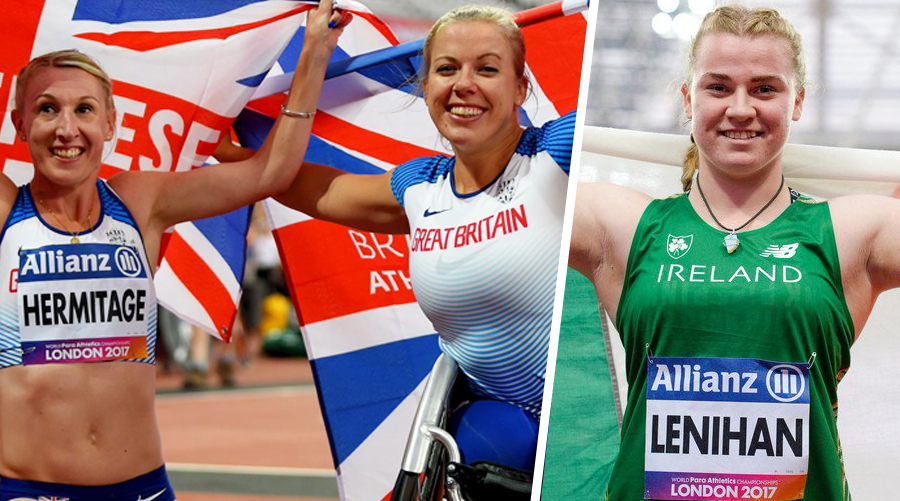 It was a sensational night at the World Para-athletics Championships, which saw Great Britain take seven medals including a tenth world championship gold for Hannah Cockroft, and gold for Georgie Hermitage in world record time. Noelle Lenihan flew the Irish flag high, picking up a silver medal.

Hannah Cockroft stormed to her tenth world championship gold in 58.29 in the women’s 400m T34 Final. It is Cockroft’s third gold medal treble.

In the same race GB’s Kare Adenegan picked up the bronze, with USA’s Alexa Halko taking the silver medal.

Georgie Hermitage powered home in 1:00.29 to successfully defend her T37 400m title, and set a new world record to the delight of the fans inside London Stadium.

A world record from Georgie Hermitage as the crowd roars her to T37 400m triumph #London2017 pic.twitter.com/3rW4JzmB7w

Kyron Duke won a silver medal in the F41 shot put. The Welshman, threw a season’s best 12.28m, but Germany’s Niko Kappel claimed gold with a new world record of 13.81.

In the women’s discus F38, Ireland’s Noelle Lenihan put in a performance beyond her years to win the silver medal.

17 year-old Lenihan’s broke the F38 Discus championship record twice, first with her fourth throw of 31.97m, followed by her final throw of 32.12m, which was only .02m off of her own world record.

Noelle has done it in style tonight with a Championship Record throw of 32.12! Amazing result for @noelle_lenihan #champion #London2017 pic.twitter.com/iW7dAa7hmp

Rhys Jones finished fifth in the T37 100m final, and in the T12 200m heats Zac Shaw battled bravely finishing 7th, but unfortunately misses out on a place in the final.

At the end of day seven, China sit top of the medal table with 19 golds and 43 overall, with the United States stay in second, with 15 golds and 40 overall, and Great Britian sit strongly in third, with 13 golds and 29 medals overall.