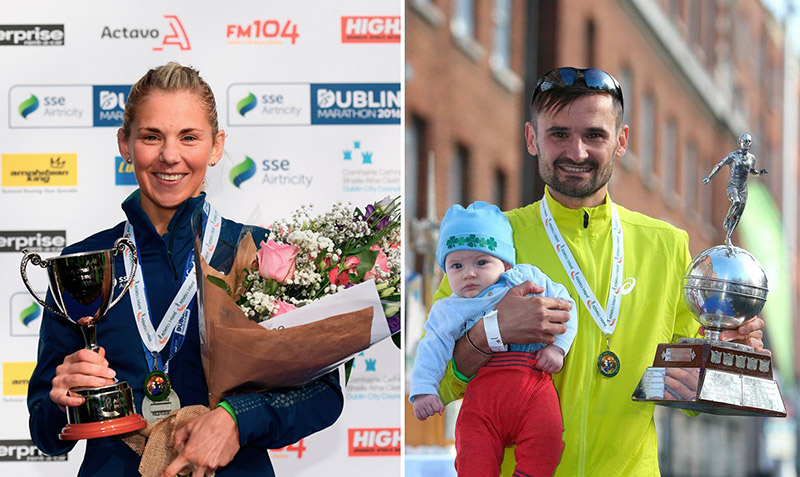 Ireland’s top distance runners will be joined with top international competition on Sunday (October 29) for the 38th edition of the Dublin Marathon.

Ciobanu of Clonliffe Harriers has prepared for this year’s race with a five weeks training block at altitude.

The 34-year-old leads a Clonliffe team that includes Northern Irish athlete Stephen Scullion, who ran a personal best 2:17.59 at the London Marathon last April and could prove his biggest rival. More recently, Scullion ran a time of 65:52 at the Great North Run Half Marathon in September and was second in the Belfast City Half Marathon in 66:11 a week later.

Also on the Clonliffe team is prolific marathon runner Gary O’Hanlon, who was fourth last year and ran a personal best 2:19.25 to finish first M40 at the Berlin Marathon last month. Making up a strong team is David Mansfield, fifth last year.

Not running is Sean Hehir of Rathfarnham WSAF winner in 2013 and in 2015 and second last year. Hehir has already run marathons in London and at the World Championships this year.

In solid form at the moment is Tomas Fitzpatrick of Tallaght AC, who has raced consistently over the past few months and ran 69:13 at the Cardiff Half Marathon.

Laura Graham of Mourne Runners is the defending women’s national champion and has been churning out good marathon times almost at will for the past two years.

She ran a personal best of 2:37.5 at the Berlin Marathon in September and followed that up with victory in the Bangor 10km in 34: 47 a week later. Last spring, Graham won the Belfast Marathon for a second year, in both cases running a week after the London Marathon.

Favourite to take the overall win is Ethiopia’s Alemu Gemechu who won the race in 2015 with a time of 2:14.02 when aged just 20. Another Ethiopian returning to Dublin is Asefe Bekele, third last year and second in 2015.

Leading the Kenya entry is Bernard Rotich winner of the Belfast Marathon last May in 2:16.04. Also entered is Dan Tanui who finished second behind Rotich in Belfast and went on to win the SSE Airtricity Walled City Marathon in Derry a month later. Making his marathon debut is John Koech, who has a best of 65 mins 22 secs for the half marathon.

Then there’s Freddy Sittuk, who divides his time between Eldoret in Kenya and Dublin. In 2015, Sittuk clocked a time of 2:15.19 for fifth in Dublin. Last year, battling injury, he dropped out at eight miles. Last month, he won the Waterside Half Marathon in Derry in 69 mins 18 secs.

Returning after her women’s victory is 2015 when she finished in 2:31.08 is Nataliya Lehonkova of the Ukraine. One to watch is Ashu Kasim from Ethiopia, who ran 2:23.09 for the marathon in 2012 and has consistently clocked time of around 2 hrs 30 mins since then. In January, Kasim won the Marrakesh Marathon in 2:30.18.

Last year, Paralympian Patrick Monahan of the Le Cheile club in Co Kildare became the first man ever to break 1 hour 40 minutes on the tough Dublin course when he finished in 1:39.18. Monahan is going for a fourth consecutive wheelchair win on Sunday.

Added incentive for Irish winners
Winners of the Irish Marathon Championships at Sunday’s Dublin Marathon will book their places on the Irish team for the European Athletics Championships Marathon Team Cup in Berlin next August.

That’s providing they run faster than 2:18 for men and 2:39 for women, which is the general standard for the team.

Live streaming of the Dublin Marathon on Sunday (October 29) can be found here.