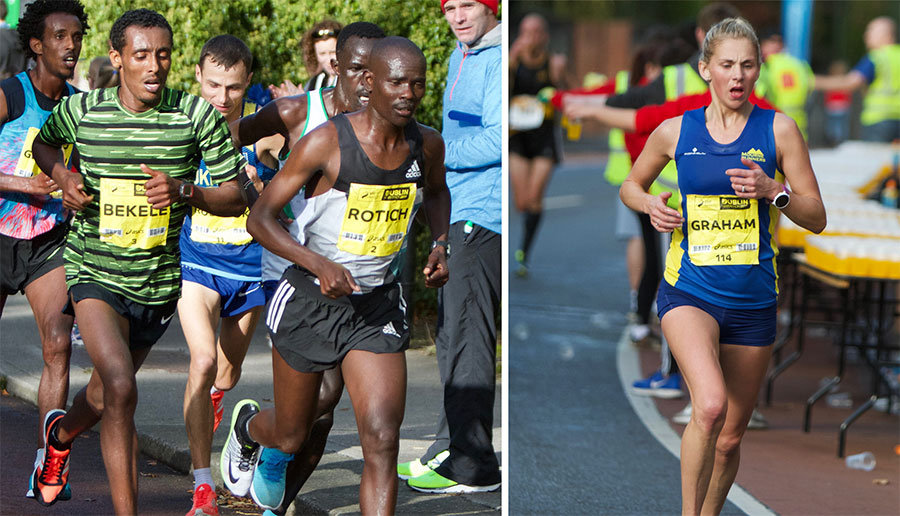 In perfect running conditions, victory was the only target for the group of 12 or so that pulled away from the pack in the early stages of the race and kept together until the end.

By the 10km mark at the Phoenix Park, reached in 32 mins 31 secs, a group of about nine athletes were leading the race with Yurii Ruskyuk of the Ukraine marginally clear of Benard Rotich, Hosea Rutto and Dan Tanui from Kenya, and the Ethiopians Asefa Bekele and Alemu Gemechu.

Little had changed by the half way mark at Dolphin’s Barn, reached in 67 mins 41 secs. As he had done a year earlier when he finished fifth, Ruskyuk had dropped back and was trailing the group by about 15 seconds. With the pace moderate by marathon standards,  he managed to recover and with just over four miles to go, was tucked in behind Rotich, who was leading the group of six.

Clearly, the race winner would come from this group which included Bekele, Rutto, Gemechu and Sittuk. Leading a well-placed quartet of Clonliffe Harriers athletes was Stephen Scullion, with both Ciobanu and the veteran Gary O’Hanlon on his heels.

In the chase for the line, Rotich came home first in 2:15.53, followed closely by Ruskyuk, Bekele and Sittuk in that order. 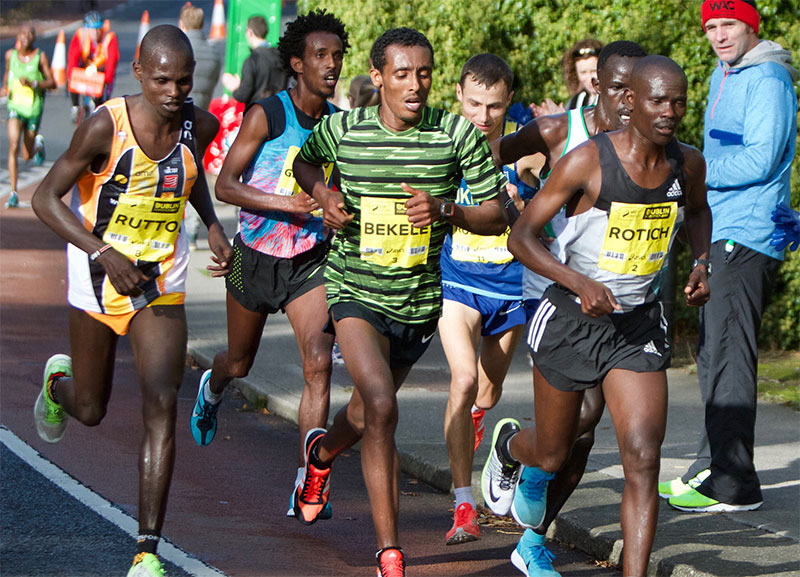 Finishing second of the Irish club men was the remarkable Gary O’Hanlon, who overtook four times champion Ciobanu and then Scullion to finish in 2:18 53 – a time that improved on the personal best 2:19.25 he ran at Berlin last month and entitled him to a €2,000 time bonus prize. O’Hanlon also finished first M40 and was helping Clonliffe Harriers defend the club title they won last year.

A clear winner of the women’s race was the 2015 winner Nataliya Lehonokova of the Ukraine. Two years ago, Lehonkova won Dublin in 2:31.08. This year, her time was a personal best 2:28.58 and is the sixth fastest ever run by a woman in Dublin. Finishing a distant second in 2:34.36 was Ashu Kasim from Ethiopia, while third was Viktoriya Khapilina of Ukraine in 2:35.55.

Fourth woman and first Irish was defending champion Laura Graham who was running her fourth marathon this year. Last month Graham had clocked a personal best 2:37.05 in Berlin. She was slower this time running 2:39.07, outside the 2 hrs 39 mins standard required for automatic selection to the Irish team for the European Athletics Championships Marathon Team Cup in Berlin next August. 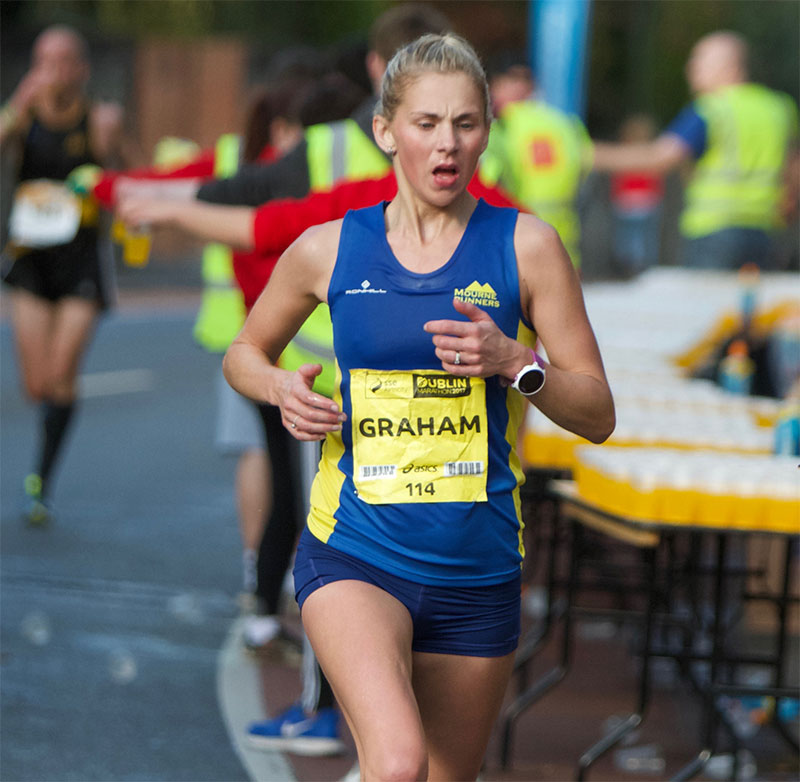 In an exact copy of last year, Caitriona Jennings of Letterkenny AC and the ageless Pauline Curley of Tullamore Harriers finished second and third behind Graham in the National Championships. Since 2005, when she first ran Dublin,  Curley, now aged 48, has never finished outside the top three.

Leading the entire field home for the fourth year was Paralympian Patrick Monahan of the Le Cheile club in Co Kildare, although his time of 1:49.55 was ten minutes off the course record 1:39.18 he set last year. Second was regular Irish visitor Richie Powell from Wales in 2:15.28, while third and first woman was Susanne McGrath in 3:35.40.

Racing elsewhere across the island of Ireland

In other races over the weekend, Gideon Kipsang of Derry Track club was a clear winner in 14 mins 32 secs of the Spooktacular 5km in Enniskillen. Glaslough’s Conor Duffy was second in 15 mins 12  secs followed closely by Foyle Valley’s Scott Rankin in 15 mins 15 secs. First woman was Heather Foley in 18 mins 5 secs, with Denise Toner of Clones three seconds adrift for second and Pauline McGurran third.

Scott Rankin of Foyle Valley was a comfortable winner of the men’s race at the Bobby Rea Memorial Cross Country held in Kilborney Park, Rostrevor in a time of 23 mins 46 sece. Andrew Annett of North Belfast Harriers was second and Craig McMeechan a close third.

Dromore junior Rebekah Nixon showed a clean pair of heels to her club mate Laura Bickerstaff for victory in the women’s race. Third was Rachel Gibson of North Down. The race was the second round in the Athletics NI XC League

Athlone IT hosted the Irish Life Health All Ireland Schools Combined Events Championships, with the highest points of the day coming in the intermediate age group.

In a closely fought boys inter competition, Troy McConville of Craigavon SHS with 3389 points edged out Leinster champion Ciaran Carthy from St Michael’s College who scored 3352 points and Brian Lynch of Colaiste an Spioraid Naomh Bishopstown with 3342 points. Brendan Lynch of St Brigid’s Loughrea won the senior boys’ title with 3211 points while Vickie Cusack of Davis College Mallow was best of the senior girls with 2814 points. Results can be found here.