A big loss for Irish sport 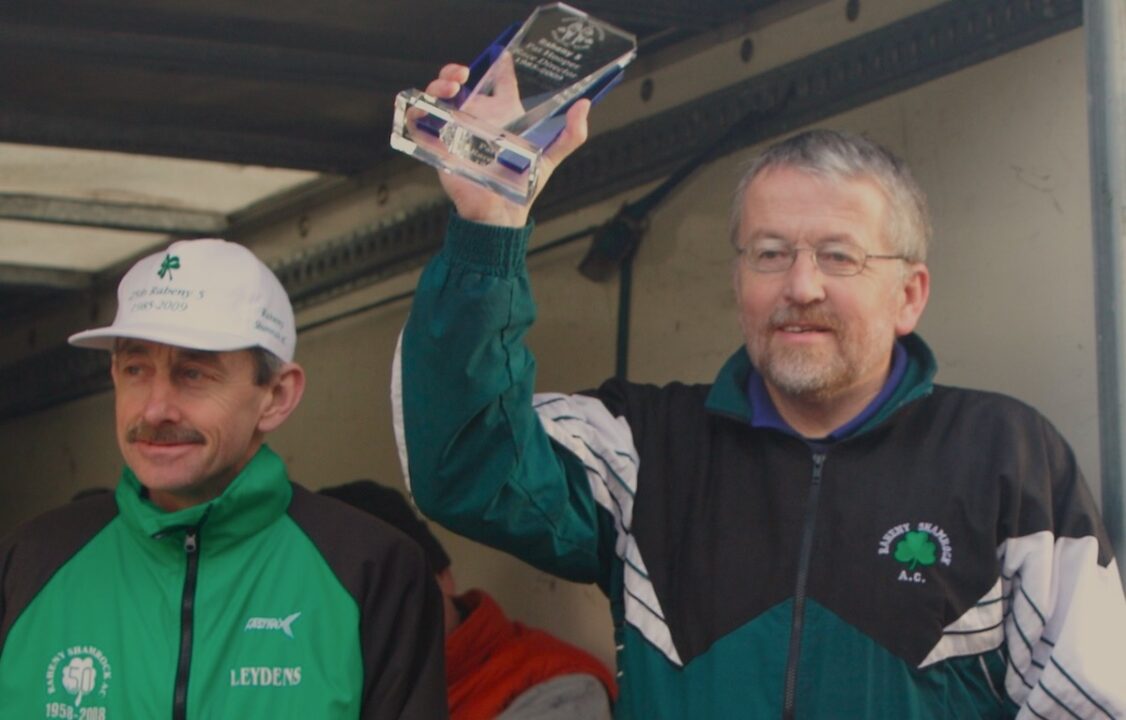 Pat Hooper (right) at the Raheny 5 after being presented a trophy by his brother Dick. Photo: Lindie Naughton

Lindie Naughton reflects on a big loss for Dublin and Irish sport, the sudden passing of Pat Hooper at the age of 68 last week.

For many, the rest of the evening was spent on the phone as they attempted to come to terms with the stunning loss not only of a giant of Irish athletics but of a personal friend.

At the death of his death, Pat Hooper was the chairman of the Dublin Athletics Board, which looks after some 42 clubs and around 9,000 athletes of all ages.

In January, he had answered the call when asked to stand as chairman of Athletics Leinster. Since 2016, he had been a member of the Athletics Ireland competitions committee. At Raheny Shamrock, he was the current treasurer, having fulfilled many other roles down the years.

Pat was the ultimate volunteer – he gave of his time unstintingly because of his huge love for athletics and because, as one of life’s natural leaders, he was happy to help out when he could.

He had competed internationally for Ireland but there’s little doubt that his legacy will live in the years of invaluable service he gave to Irish athletics as an administrator, a coach and an official. No job was too small for Pat if it served athletics.

We were lucky to have him.

A life lived for sport

Patrick Hooper was born on 12 July 1952 and bought from hospital to the family home in Raheny, on the north side of Dublin. He was one of six children. For the rest of life, he never moved far from the place he was born and bred.

He faced tragedy at a young age when his father, also called Patrick, died aged just 44 of a massive heart attack on 29 January 1963. Pat junior was ten and his younger brother Dick six. Their mother Maura was left to cope with a young family.

After his education at St Paul’s College, Pat began work in the insurance industry employed by the Irish firm PMPA which began as a motor insurer but soon grew into the largest insurance company in the country before spectacularly collapsing. At that point in the 1980s, it was bought over first by Guardian Royal Exchange and later again by AXA for whom Pat worked until his retirement.

By the early 1970s, Pat had begun training with the local athletics club Raheny Shamrock and was soon followed by his younger brother.

Marathon running was creeping into the public consciousness at the time and Pat’s hero was the Czech marathon runner Emil Zatopek, winner of three gold medals at the 1952 Olympics, whose philosophy was that “with persistent hard effort, you can change your body”.

The Czech’s brutal 40×400 efforts – a new style of training called “intervals” – and huge weekly mileage of a hundred miles and more, sometimes wearing heavy army boots, had become become the stuff of legend.

Getting the miles in on the run-commute

Pat, who had realised early on that he was not speed merchant material, began running to and from his home in Raheny to the PMPA office off at Wolfe Tone Street on Tuesday and Thursdays in an effort to increase his weekly mileage.

His mother thought he was mad and she wasn’t the only one; road running was a minority sport back then and he got the occasional offer of a lift from concerned drivers. On those same days, when in full training, he would run a 13-mile times circuit over the Hill of Howth in the evenings.

On Saturdays and Sundays ,he would set off on 24 and 30 mile long runs with the late Jim McNamara of Donore Harriers.

Winner that day was his younger brother Dick in 2:16.27, with both men wearing their lucky green and white candy-stripe Dolphin shorts and both selected for the European Championships in Prague where Pat finished 27th in 2:20.29. It was a golden era for Irish athletics, with John Treacy winning his second World Cross-Country title in Limerick in 1979 and Eamonn Coghlan taking silver outdoors and gold indoors over 1500m at European level in 1978 and 1979.

In 1979, Pat was to hit the pinnacle of his career. In the spring, he won the second ever Ballycotton “10” in 49 mins 12 secs – a new course record. At the Dublin 10-Mile Championships, he recorded a solid victory over Gerry Kiernan of Clonliffe Harriers, while in Lanesboro, Co Roscommon, he won the National 15-Mile title in 75 mins 14 secs.

Best of all, on a scorching hot July day, again in Tullamore, he won the National Marathon title in a personal best 2 hrs 17mins 46 secs. The race included an international challenge and Scotland’s David Clarke was second in 2:18.01.

That year of 1979 also saw Pat attend a meeting of running enthusiasts interested in providing inter-firm competition for road runners of all standards. At a tense period in Irish history, Pat pragmatically proposed that the word “Irish” be avoided in the title of the new organisation.

So was born the Business Houses Athletics Association, with both Pat and Dick staunch supporters of its races over the next decade.

A main rival close to home

Back in Tullamore for a third time in May 1980, the brothers again battled it out at the National Marathon with the race a trial for the Moscow Olympics later that year.

On another broiling hot day, the plan was to share the lead until the opposition was burnt off after which it was each man for himself. Dick took the win in 2:16.27, while Pat was a brave second in 2:19.23 despite an incident at the 14th mile when a well-meaning official, attempting to cool him down, hit him full on with a bucket of water.

On Monday 27 October 1980 came a pivotal moment in Irish athletics history when the first Dublin Marathon was held. The race course took in Raheny and Pat as a steward watched as his brother Dick made a small piece of running history by winning the race. A year later, Pat finished fourth in the second Dublin Marathon in 2:20.01; Dick didn’t run.

By the middle of the decade, with injuries and the heavy mileage of his younger days taking their toll, Pat was already moving off stage to concentrate on the administrative side of the sport and was also coaching local youngsters in the fine art of road running.

With a head full of ideas, he was persuaded to join the Raheny Shamrock committee, where he discovered to his dismay that the club was in serious financial difficulty. To bring in much needed cash, he proposed organising an annual road race. And so was born the Raheny 5-Mile, with the first race held in January 1985. Now firmly established as a must-do road race on the Irish circuit, the race celebrated its 36th anniversary last January. Excelling on the other side of racing

It would become one of hundreds if not thousands of local races that Pat would organise, often using St Anne’s Park, where the club trained, or a one-mile circuit around All Saint’s Road which was relatively car-free.

In 2001, Pat proposed holding the National Road Relays on the circuit, with victory for Raheny’s senior men making it a glorious day for the club. To this day, Raheny is the “home” for this popular club event, attracting teams from clubs all over the country every April.

Other Pat Hooper innovations have included regular local road leagues, most notably the Lord Mayor of Raheny summer series and, more recently, the Battle of Clontarf 10-Mile on Easter Monday, based in St Anne’s Park.

As chairman of the Dublin Athletics Board for over a decade, Pat brought the Dublin Masters Cross-Country Championships to St Anne’s Park. Held in early January, this is now second only to the National Championships in terms of the numbers it attracts.

Club pride for a national victory

As a club mentor and coach, Pat’s proudest day probably came in 2016, when Raheny Shamrock’s team of Mick Clohisey, Kevin Dooney, Conor Dooney and Mark Kirwan took the senior men’s title for the first time at the National Cross-Country. They would repeat that feat in the next two years, but it’s the first one that’s magic.

There’s more. No schools event or track meet in Dublin or Tullamore was complete without the avuncular presence of Pat on the finish line.

On some days, he would be standing with his stop watch at the North Leinster Schools Championships and a few hours later, standing with the same stop watch at a Dublin Graded League meet. For many of us, a visit to Santry wasn’t complete without a brief catch-up chat with Pat behind the timekeeper’s “steps”.

For travelling to road races in places like the Phoenix Park, Pat took to his bike as a means of keeping fit, especially after a knee replacement operation, often carrying a sheaf of road race flyers to hand out at the end of the finish chute.

No man or woman is irreplaceable, but Pat Hooper – or “The Jugger” as he was to Raheny members – almost fits that description. He leaves a huge gap. Some sad days lie ahead, particularly at the Dublin Masters, the Raheny 5 and the National Road Relays, but we can rest assured that the spirit of this thorough gentleman will continue to permeate the sport he loved.