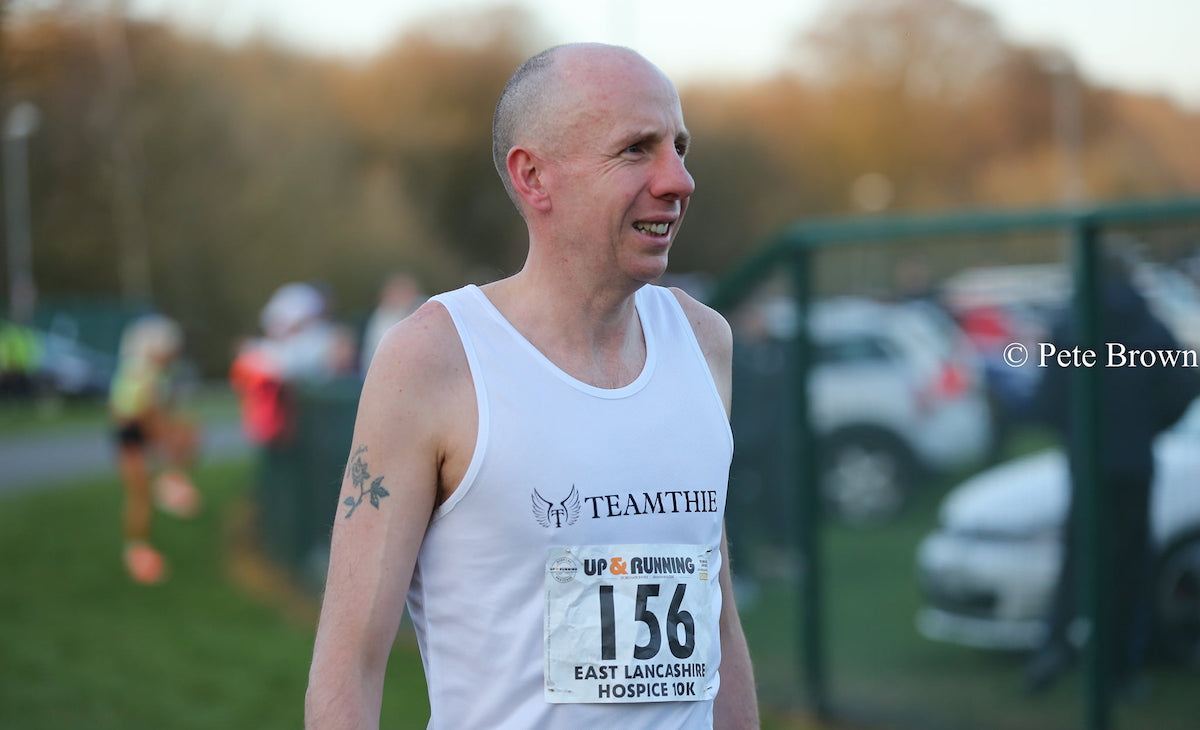 Wearing a white ‘Team Thie’ vest and storming through the line on the ‘B’ race at the Podium 5k is a man finishing in what would ordinarily be a highly creditable but relatively anonymous 20th place. But this is no ordinary run from a very club standard club runner. It’s more than that and the whispers amongst the small but discerning socially distanced crowd are that this is a 45 year old whose 14m44s clocking belies both his chronological and training age in our sport.

Mick Hill has indeed broken the M45 British 5k record. Immediately his thoughts turn to dedicating his triumph to his late, beloved brother. With considerable emotion Mick reflects that, “Pete passed away in autumn 2020 after a horrible battle with lung cancer. He was only 60. Pete had always supported my running and it gave me a lot of pleasure as he approached his 50th birthday back in around 2010/11 and after some battles with alcohol and a lifetime of heavy smoking he developed the running bug and became a keen fell-runner with both Pudsey & Bramley AC & Altrincham & District AC. Watching him get round the Yorkshire Three Peaks race was one particular highlight”.

His mood then lightens when turning his attention to the enormity of his achievement. He acknowledges that, “Running sub 14m50s was always my number one target hitting 45. I had gone 14.50 at Armagh 5km in Feb 2019 so knew it was doable. I got a bit unlucky with bad weather a couple of times and came very close with a 14.54 at Mallory Park 5km. My Podium run was long overdue and we got very lucky with that perfect storm of great weather, fast course, deep field and of course the sprinkle of magic that is Chris Barnes!.”

I ask Mick to regress the story to his days as a senior and he explains that, “My senior career had two halves to it – University & post-University. I made a massive jump in my last year in the U20 Junior ranks whilst in my first year at University of Leeds. Leeds made a massive impact on me, especially the likes of Greg Hull and Martin Roscoe, both still in Leeds at the time and university alumni in their late 20s. At the time both were still running well & living a runners lifestyle. I first linked up with Greg for morning runs in 1995-96 and in doing so probably lifted my running volume from maybe 30-40 mpw to the dizzy heights of 60mpw or so. This was the first sign that I would respond really well to overall running volume.

Over that winter from December 95 through March 96 I went from having never made an English Schools XC whilst running for Bolton Harriers in Greater Manchester to finishing 10th in the Greater Manchester Under 20s, 14th in the Northern U20s and 11th in the National U20s. That 11th place in the National at Newark gave me the self-belief I could be a decent runner. Over the next 3 years I had a really great university career on the XC and in various relay events – a 15th and 11th place in BUCS XC, a win at the Braids Hill XC Edinburgh plus fastest legs at Nottingham, Durham and Hyde Park Relays.

Going into my second year at Leeds I also linked up with the magician that is Bud Baldaro. In my last year at Uni, aged 22, I finished 27th in the World XC Trial / Inter-Counties and 36th at the Senior National XC whilst only 22. These latter two performances got me selected for the World University XC Champs in 1998”. Ever keen to credit others Mick acknowledges that, “At Leeds I was also very lucky to have amazing team mates like Simon Deakin, Tim Crossland, Alan Buckley, Andy Beevers, Martin Hilton and Paul Low. Plus there was Ian Mitchell who wasn’t at the University. All great lads who I was very lucky to be able to train with in a running environment which to this day is incredibly conducive to endurance running.”

So how did his form continue post university? Mick continues, “Post grad studies both in Michigan and then back in Leeds didn’t work out for me. Post University I drifted around a bit, headed out to college in Michigan, USA in Sept 98 on a scholarship that just didn’t work out – I was home after about 3 weeks! I also ended up back at University of Leeds on a second degree in Sports Science & Physiology in Sept 99. That didn’t work out either!

So where did things begin to grind to a halt? Mick recalls that, “I had worked in London and was then back in Bolton by 2001. This seemed to be the point in my life when I started to gain weight – my dietary habits were shocking and my office-based job had a culture of breakfast butties and take-aways for lunch as we were close to a retail park. Most days I would be eating take-away for my tea as well. At first there was a touch of novelty around the weight gain as I had always been an under-weight, very frail looking runner.

Heading into spring 2002 it was clearly impacting my training and race performances and I’d slipped to 114th at the National XC in Bristol that year. At the time this was so demoralising I don’t think I ran for a month. It went downhill from there and I gained around 3/4 stone every year. I always tried to run and I did a bit of racing between 2002 and 2009 but I just did not understand the relationship between diet, bodyweight, health, training & race performance. I do not think I had ever consciously ‘retired’ as such”.

Overweight and out of condition

As the noughties wore on, it was clear that Mick was well out of shape as an athlete. With a sigh he remembers that, “By 2009 I had reached 15st 3lbs and at the time this was the heaviest I had ever reached. My first comeback started in April 2009 and over 2 years I lost 5 stone and got down to 10st 3lbs. I did this simply by training ridiculously hard, I was not quite on top of my diet. It was brute force approach!

In 2011 I ran fairly well on track and road with some decent performances over 5km and 10km. Towards the end of that summer I got Plantar Fasciitis and it persisted for around 18 months despite all manner of treatment. I put back on all the weight I had lost and by 2018 I was up to 16 stone!”.

On the comeback trail

With a cringe, Mick admits that, “My clothes didn’t fit, my skin was terrible and I was getting some chest pains. Initially I just focussed on weight loss. I simply focussed on ensuring that my calorie expenditure was really high vs calorie intake. I hit the gym every single day and did 60mins on the Cross Trainer at a decent intensity, not mega hard but enough to get a sweat on. I did some crazy stuff like 3-4 hour dog walks with a loaded rucksack. I was also doing some long Sunday bike rides of 3hrs plus. All low aerobic, fat burning work.

I was hardly running, albeit I started racing from very early on and I used my race improvement from a ridiculously low base as motivation to push on. There were a fair few 45mins plus 10kms and 5kms which were well over 20mins. As the weight dropped (around half a stone per month) and the race performances improved I became increasingly motivated and in no time at all I was starting to think about running seriously again.

At some point I decided to start to chase M40 GB ranking positions for 2019 and this then grew into a desire to chase M45 GB records when I hit 45 in September 2020”. In part two, we unpick the philosophy of training which Mick has adopted as a masters athletes which accounts for his recent success.

Matt Long is a Midlands Team Manager for Road, Cross Country and Masters. He can be contacted for support at mattlongcoach@gmail.com. Mick Hill shares all of his training on Strava and also on his Instagram & Twitter accounts. Please follow him at: