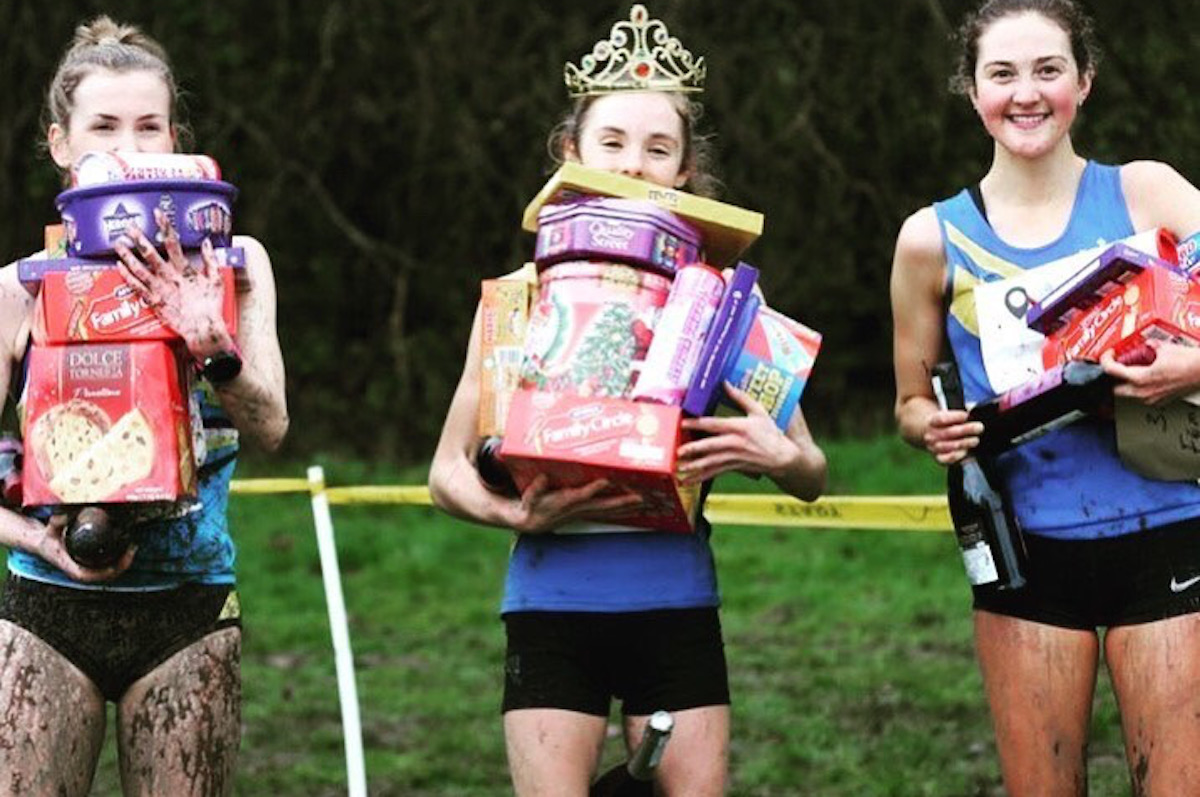 Amelia Quirk continues her XC dominance and Luke Duffy leads the charge of the U20s as top class racing sees athletes continue to let rip after a year of cancelled races.

Podium takes to the mud with the same incredible fields

Bracknell AC’s Amelia Quirk left us in no doubt that she is queen of the XC at the moment. After winning Southern Champs at Parliament Hill and then the U20s Saucony English National Championships at Wollaton Park earlier this year (before “the Covid thing”), she took a convincing victory in 26:16 at the Podium XC 6k (actually 6.8k) Ladies Elite Race near Clitheroe in Lancashire.

Senior Eleanor Bolton took second for Ribble Valley Harriers in 26:42 and Bronwen Owen was just behind her in 26:50 for Leeds City AC. Kate Avery was back racing for the first time since her appearance on the track at the British Championships and finished three seconds behind to finish fourth. In the 8k (ahem, 9k) Elite Men’s Elite Race Emile Cairess of Leeds City AC set out at a suicidal pace but in the end it was Ross Millington, back on fighting form after his DNF at the London Marathon, who broke the tape in 31:48, taking top spot for the New Balance Manchester team. Cairess held on for a second place in 31:57 and Callum Johnson took third for Gateshead Harriers in 32:04.

Ben Connor should have been in the mix and indeed would have been had he not lost his shoe on the first of the 1.1k laps but alas, Cairess’s mad mission in the early stages meant it was just too far to catch up and he finished 41 seconds later in fourth place. Over the Open 6k Race (actual distance ?!) Flynn Jennings won in 23:55 (Bideford AC) with Cambridge and Coleridge’s Oliver Newman next in 23:55. Alfia Manthorpe was third in 24:11 (City of Sheffield +Dearne).

In Derby the Derby Runner XC event, which was only for those in the surrounding Tier 3 areas, saw Juliet Potter win the Senior Women’s 8k race for Charnwood AC in 25:36 and Skip Snelson of Banbury Harriers win the men’s 8k in 24:45.

The Race Rapid Mallory Park 10k on Sunday was host to a slew of U20s gents on a mission, it seems. Luke Duffy led the charge of the youth, clocking a 30:14.6 for the win. Right on his tail was Matthew Stonier with 30:15.5, just holding off Rory Leonard who finished in 30:18.7.

The ladies race was one for the Seniors and Jess Judd showed her racing experience, victorious in 32:30.7. She may have been well ahead of runner up Sophie Coldwell, but a 33:24.7 for a specialised triathlete is not to be sniffed at! Hannah Nuttall took the third spot in 35:08.6.

Incredible fields on show at PB5k

There was even more top class action on Sunday with the PB5k. Conditions and the course were never going to give PB times but there was some great racing to be seen. Izzy Fry (Newbury AC) is on the results board as being first home for the ladies in 16:24 but her time was exactly matched by Beth Kidger (Brighton Phoenix) so it shows just how close it really was with the two athletes shoulder to shoulder in the home straight. It really was an incredible finish to the race and you can watch it back over at RunningLive. Brighton and Hove AC’s Ian Crowe-Right won out by a two second margin in 14:23 taking the lead from Liverpool Harriers’ Joe Wigfield. Robbie Fitzgibbon was third for Brighton Phoenix in 14:29. The top of the table was super-close with the top 16 all under 14:50. It’s well worth looking through the full results as they are packed with quality performances and athletes.

From mountains to tarmac Welch storms to Exeter win

The Fast Friday 10k at Exeter racecourse was rescheduled from earlier this year. Clearly that extra time was good for Ben Neale (Tavistock Run Project) who absolutely annihilated his previous PB (33:11) to run 32:06 for first place. Sam Hopton of South West Road Runners couldn’t quite hang on but kept the pace rather nifty to finish in 32:24 and second place. Robert Ellis (Exmouth Harriers) kept the podium well under 33 minutes, with a third place time of 32:33.

The women’s race results brought a smile to our faces – GB mountain runner Kirsteen Welch (Exeter Harriers) has had a tough year of it, battling overtraining and fatigue and mental burnout. She’s been backing off and trying new training cycles and boy does it seem to have paid off. She took over a minute and a half off her PB to finish in 35:14 and be crowned first lady. Taunton AC took the next two podium places thanks to Elle Twentyman (36:41) and Hannah Taunton (35:51)

Butchart returns to the road in France

At the 10km du Circuit Automobile d’Albi Andy Butchart ran his only road race of the year so far. Blustery conditions didn’t help but 28:52 for fifth place shows that he’s not been shirking the training over these last 11 months.

In the first of this week’s Run Through events, the Chase The Moon series showed that people are looking for a chance to burn off some pent-up racing. The men’s 10k was won by Ben Shearer (V40) in 32:10, with Calum Nicol (33:17) and Matthew Cartwright (33:17) providing some strong competition.

Over 5k u/17 Lily Neate, coached by Mike Chambers, led out a swift women’s field, covering the course in 17:41 to edge out Natasha Sheel who ran 17:56. Cara Huckstep placed third in 19:07. The men’s victory went to Tyler Bilyard in an eyewaterng 15:08 and way ahead of the photo finish for second and third – Jonathan Parr and Michael McCarthy both ran 15:57!

On Sunday it was time for the Run Aintree event which saw 5k, 10k, and Half Marathon races.

Sophie Wood took on the Half Marathon distance and showed it who was boss, racing home in 78:17 and leaving a sizeable gap to her nearest competitors, Luisa Candioli (83:36) and Bethany Donnelly (84:14). Chris Pownell’s 74:06 was a little off his PB but enough for Half Marathon victory this time. Michael Powell was second in 75:11 and Daniel Hayes third in 79:00.

Burling stars in Essex with back to back wins

Also offering a smorgasbord of distances to race was the rescheduled Remembrance Essex race. Despite cold, wet and windy conditions, Thomas Keen kicked off the winning performances by taking over 30 seconds off his PB, finishing the 5k with a winning time of 14:45, Conall McGuiness was second in 15:03 and Thomas Bridger third in 15:32. Sally Judd looks to have won the women’s 5k in 17:09 with Hannah Lord second in 17:52but results are looking confused at the moment so that may change.

Finally, taking the brunt of the rain and cold, the Half Marathoners were clearly in a hurry to get home, as Nick Harris-Fry took over a minute off his previous best to fight it out for first and finish in 72:12, just holding off Rob Elmore’s second place in 72:15. George Gathercole was third in 73:00. For the women, it was Jen Baird who went home with the win, finishing in 84:03. Katie Austin was second in 88:08 and Janine Makaronidis third 89:19.

The Xero MK Winter Half Marathon took place over two days so it was all about the personal battle and the chip times when it came to podium places. After some strong showings on Saturday, it was the Sunday crew that won out, with Jordan Clay (Leighton Buzzard AC) leaving the rest for dust in 68:40. David Hudson (BRJ Run & Tri) was in a tussle to the end for second place and just snaffled it in 72:05, just a whisker ahead of George Phillips (ity Of Norwich AC) who finished in 72:08.

The women’s podium wasn’t quite such a clean sweep for the Sunday-runners. Alicia Lacey (Norwich Road Runners) ran a convincing victory in 80:48 with Lauren Longhurst (Mornington Chasers) second in 83:55. However, it was Saturday’s winner, Rebecca O’Kill of Southend On Sea AC who not only ran a sizeable PB to finish in 84:39 but also went home with third place over the two days.

Lastly, but by no means least, our own Fast Running Editor in Chief, Robbie Britton was in action at the Mezza Maratona `Terre d’acqua città di Trino` in the north of Italy. It was his first running race of the year, a year he has focussed mainly on cycle training with a few weeks of running 30-40 miles. He set himself a target of sub-73 and, well, you know why he’s a running expert – he went and ran 72:43 and placed 24th. Nice one UltraBritton!