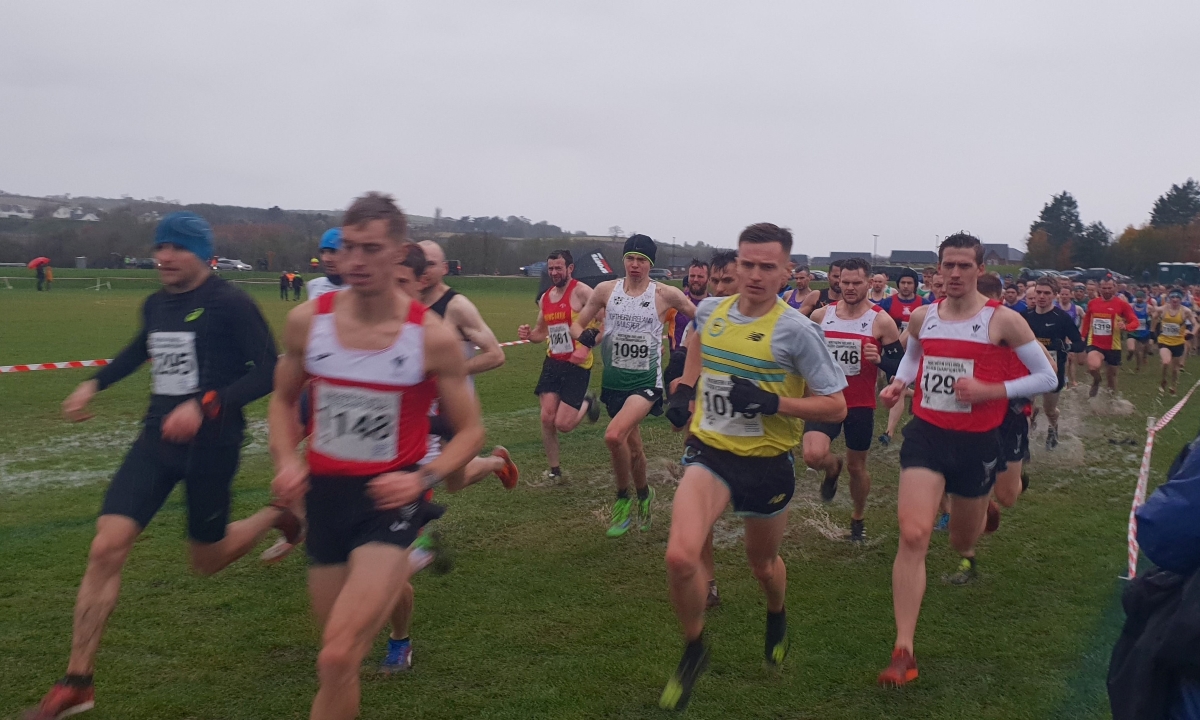 The weekend was dominated by the high class field at the Bobby Rea International XC but there were also fine performances in races both on and off the road across the country.

Finishing third was Fionnuala Ross of Armagh AC in a race which attracted an entry of over 180 and included teams from Ireland, Northern Ireland, Great Britain and Wales. There were also good runs from Jodie McCann of Dublin City Harriers who finished fifth and Grace Lynch of Iveragh AC in Kerry who was eighth. All these women are likely to be competing in the National Cross-Country at Abbotstown on Sunday November 24.

Best of the 13 local club teams entered was North Down AC, with Armagh AC second and Beechmount Harriers third.

Also lining up in the 6km race were over 60 men with Norman Mawhinny of Scrabo Striders the fastest – just six days before the British and Irish Masters Cross-Country at Aintree in Southport.

Winning the men’s 10km race was Adam Craig of the GB team with Welsh athletes James Hunt and Ieuan Thomas second and third. Best of the local athletes was Conor Bradley of City of Derry Spartans and Northern Ireland/Ulster. Finishing sixth was Neil Johnston of Springwell RC, while in eighth place was Conor Duffy of Glaslough Harriers in a good show for the NI/Ulster team. Best for the Ireland team was Sergiu Ciobanu of Clonliffe Harriers in 13th place; Ciobanu’s last outing was the Dublin Marathon. First of the 19 teams was City of Derry Spartans followed by Beechmount Harriers and North Belfast Harriers. A total of 218 completed the race.

All the action on the roads

In Cork, John Meade of St Finbarr’s just made it to the line ahead of Damian Kenneally from Eagle AC at the Thomas Kent 10km on Sunday (November 10). The pair finished in 33 mins 27 secs and 33:29 respectively. Third and first M45 in 34.23 was Kieran McKeown of Watergrasshill AC.

First woman was Linda O’Sullivan in 40.06, with her Watergrasshill AC clubmate Colette O’Donoghue second in 40.21 and Roisin McLaughlin of Grange Fermoy AC third in 41.08.

Winning the Eyeries 5 Mile in Eyeries, Co.Cork on Saturday (November 9) was Alan O’Shea of Bantry AC, who finished in 25 mins 21 secs – a time which broke his own course record. The 2018 winner, Shane Harrington of East Cork AC, was over two minutes adrift for second in 28.14, with Rory O’Sullivan of St Finbarr’s AC third and first M40 in 28.44.

A trio from St Finbarr’s dominated the women’s race with Orla Byrne first in 32.16, followed by teammates Anita Locke in 34.49 and Irene Eighan in 35.59. At the Kerry Crusaders Listowel Half Marathon and 10km also on Saturday (November 9), local athletes Eddie O’Connor and Rachel Stokes were first home in the 10km with times of 33 mins 35 secs and 41 mins 1 secs respectively, while local Garda, Ian Kelly, won the half marathon in 79:49 with Selenia Nolan of Ennis Track first woman in 88:52.

In Co Kildare on Saturday, Brian Conroy of Clane AC won the Clane 10km in 32 mins 54 secs, with Sean Doyle second and Aindriu Comhraidhe of St Michael’s AC third and first M40 in 33:38. Michelle Cox of Newbridge AC was first woman in 39:07, followed by Fiona Gettings of Crusaders AC and Emma Boland of Newbridge AC. Winner of the 5km were Ciaran Molloy and Michelle Hanlon.

Irish international orienteer Conor Short of Curragh-Naas OC posted the fastest time for the 7.6km brown course at the Leinster Orienteering League event held at the Vale of Clara in Co Wicklow on Sunday (November 10).

Short clocked a time of 52 mins 28 for the course which included 24 control points. Second was Anton Hallor of host club Ajax OC in 52.15, while third was Ruairi Short of Curragh-Naas in 55.57. Fourth and first M40 was Valdas Tilunas of Three Rock OC in 59.31. Clodagh Moran of Three Rock was the only woman to complete the course; her time was 83.59.

Fastest on the 5.9km blue course with 19 controls was junior orienteer Eoghan Whelan of Waterford OC in 59.18. Fastest woman and third overall in 68.23 was Eadaoin McCavan of Great Eastern Navigators.

Winners of the Westport Sea to Summit adventure duathlon were Killian Heery in 2:43.16 and Laura O’Driscoll in 3:14.03.